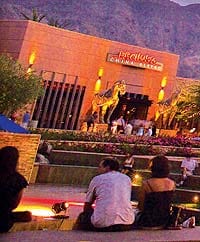 Some go for the cuisine. For others, it’s the enticement of watching a first-run film in plush surroundings, browsing at Borders, or exploring specialty retail that draws them to The River at Rancho Mirage. For the upscale dining, entertainment, and shopping complex offers all that and more.

“It’s not hyperbole to claim it’s become the premier social gathering place in the valley,” says Dana Hobart, a retired Los Angeles attorney who relocated here 15 years ago and now serves on the Rancho Mirage City Council. “Why not? There are terrific restaurants, novelty stores, haute couture, Borders, and a magnificent theater. And there’s an overall ambiance that urges visitors to wander about and check out the sights and the meandering river.”

That this popular hangout actually does not have a river seems a meaningless technicality, because there’s certainly an abundance of water; 1.7 million gallons flow through the pools, streams, and fountains, contributing to the ambiance that, indirectly, has been contributing to the bottom line for many of The River’s tenants. Occupancy rates have been high all year; over the summer, there was only one vacancy among the 40 retail spaces. Another sign of stability: A number of original tenants from The River’s opening months in late 2001 still are around. That roster includes Borders Books and Music, Fleming’s Prime Steakhouse, P.F. Chang’s China Bistro, Baja Fresh Mexican Grill, Yard House, and Ben & Jerry’s.

“The city worked for 20 years on building something here,” says city Economic Development Director Barry Foster of the triangular parcel that’s bordered by Bob Hope and Rancho Las Palmas drives and Highway 111. “What we ended up with is upscale and unique. I think we held out for the right project.”

Certainly, the city did make accommodations to Jerome Snyder, a big-time developer from Beverly Hills who built The River for $50 million. Perhaps most notably, the main section of the 17-acre layout wound up being donated rather than sold for $2 million. It was a concession to Snyder, who pleaded his case at city council meetings. Still, a city that over the years invested $16 million in acquisition costs and improvements to the property has benefited considerably. It now receives about $500,000 annually in sales-tax revenue from businesses at The River. The city’s redevelopment agency receives more than $220,000 in additional property-tax revenue because of those businesses.

As for Snyder, the part-time Rancho Mirage resident should have been grinning all the way to the bank this summer after selling The River to the London-based Grosvenor Group for $100 million — grinning as would any other first-rate capitalist. What a country. The man doubled his money in less than four years.

River officials have determined that their clientele appear to be a mixed bag with an age range of 30 to 65 and household income from upper-middle to high. “A variety of people come to The River. Our goal is for you to spend $2 or $100, but to be entertained either way,” says General Manager Julie Reese. “We do not endeavor to be a mall.”

The specialty retail segment that comprises roughly 30 percent of The River’s tenants includes Tulip Hill Winery, a family business that opened its doors here in 2003 after deciding it could fill a niche in the desert. “The wine business is very competitive in California, and that means location is critical,” says Tulip Hill owner Kristi Brown. “Our vineyards are in Northern California, but this is our only store and we’re well priced. Our concept and our products have been well received. We get customers who come to The River for dinner or a movie. They wind up coming in here, too. Maybe the rent would be lower someplace else, but the traffic here offsets that.”

Here and there over nearly four years, businesses have failed at The River. During late summer 2003, Prego and Guaymas, two pricey establishments owned by Spectrum Restaurant Group, closed within five weeks of each other. But the closures came shortly after Spectrum had filed for bankruptcy. Company officials said both eateries underperformed and were logical choices to close amid restructuring.

“It was a company issue rather than a site issue,” Foster says. “Many restaurants at The River are close to the top of their chains for performance.” Certainly, the replacements for Prego and Guaymas — Piero’s Acqua Pazza and  The Cheesecake Factory — have done well.

“We’ve exceeded expectations at that location,” notes Howard Gordon, senior vice president for business development and marketing for The Cheesecake Factory. “We’re particular about where we open a location, and every one has been successful. We had been looking in the Coachella Valley for some time and decided on The River. We made the right deal that supported us as well as The River. Rancho Mirage is midvalley. We get customers from all over and feel we’ve been well accepted valleywide.”

The River’s one ongoing problem has been lack of parking, an issue that has recently received much attention. The lot at The River has about 1,750 parking spaces, including those used by employees of its businesses and for valet service. On high-traffic days, the lot is full. There also was the dispute that arose between Snyder and the city over whether he could charge a fee for valet parking. Despite a city ordinance prohibiting it, The River charged for valet parking during a period in 2002 and also last year. It prompted the city to file a civil action and also issue citations to Snyder and Reese for city-ordinance violations. Those matters drag on in the legal system.

As for the lack of spaces, the city still hopes to add 350 spaces by building a two-level parking structure that would be leased to The River ownership. That condition was part of a tentative settlement agreement reached earlier this year in the valet parking dispute. “Tentative” is the key word there. The agreement fell apart when the Grosvenor Group came on board. At press time, the city was back at the negotiating table — with The River’s new owners.