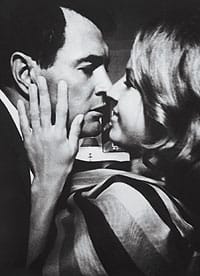 Two years ago, opening night at the San Francisco Film Noir Festival included a screening of The Maltese Falcon — the often-televised Humphrey Bogart movie easily found at any decent video store. The selection underscores the significant difference in programming at the Palm Springs Film Noir Festival.

“We search for rare films that you aren’t going to see on TV and probably aren’t on video,” says festival producer Arthur Lyons. “I can do that because I have a network  of collectors.”

Among them is film restorer Jay Fenton of Pittsburgh, Pa., who is bringing to this year’s festival four films that no longer exist in studio archives — including one of two existing copies of Blonde Ice from 1948.  “I have run into this time and time again that studios just let these films rot,” Lyons says, adding that years ago studios considered restorers outlaws under the guise  of copyright theft. “Now they’re the heroes, because they are the only ones restoring them.”

When this year’s festival opens June 2 at Camelot Theatres, Lyons will shine the light on efforts of the Film Noir Foundation, a nonprofit organization that finds, buys, and restores movies of the genre.

The festival also pays homage to the 1960s. The opening-night film Seconds — starring Rock Hudson — was released in 1966. The closing-night film The Night of the Following Day — starring Marlon Brando, Richard Boone, and Rita Moreno — came out in 1969. Lyons calls both “very disturbing.”

“When I saw [Seconds] in the ’60s, it haunted me for a month,” he says. He describes the story as one in which a secret company gives people a second chance to do what they really want to do and still they ruin their lives. And in The Night of the Following Day — about a botched kidnapping — Richard Boone’s character totes around torture instruments.

“A lot of academics have said film noir ended in 1955,” Lyons says. “It never ended.”  It evolved, he asserts. “Desert landscapes are becoming more and more the background, because they have the bleakness that the urban settings had in the ’40s.”

That is the Palm Springs event’s theme.

Stars expected to attend include Nancy Gates (accompanying her 1954 film Suddenly with Frank Sinatra and Sterling Hayden) and Mamie Van Doren (with her 1959 film   Guns, Girls and Gangsters).

This year’s festival also includes three parties with special guests upstairs at Camelot Theatres. The opening-night party will celebrate the fifth anniversary of the event that tripled in attendance last year

“The first year, I lost money, and I said, ‘If I lose money the second year, I’m not going to do it again,’” Lyons recalls. “We were in the black in the second year, which is very rare for a film festival.” Then, the audience primarily consisted of local residents. At last year’s opening night, Lyons polled the crowd to find out how many were out-of-towners. “Seventy percent of the audience was from out of town, and 70 percent came in for the festival,” he says. With inquiries from as far away as Australia, he expects this year’s event to draw even more enthusiasts.

Lyons may personally consider this year’s festival better because it includes Seconds, his favorite film. “I like films that make me think,” he says. “I like all Doris Day films, too, so [my taste is] eclectic.”

Bombshell Gets Her Day

It was in the late 1940s when the then 16-year-old Joan Olander came to the attention of Howard Hughes at the famed Chi Chi club in Palm Springs. Living with her mother on Mel Avenue, she represented the Montecito Hotel across the street in the 1948 Miss Palm Springs contest. The beauty competition was held right after Desi Arnaz’s show at the Chi Chi, and Howard Hughes was in the audience. It was just as well that Olander did not know.

“I was so frightened. It was the first time I’d done anything like that,” she says referring to parading in public in a swimsuit.  After winning, she was invited to a chamber of commerce luncheon, where the Greater Los Angeles Press Club asked her to be its Miss 8 Ball. As such, she received tremendous publicity and a call from Hughes’ RKO Studios asking her to come to casting.

“They said Mr. Hughes would like to meet me and that he had seen me in Palm Springs at the Miss Palm Springs contest,”  Van Doren recalls. Hughes put her under contract for five years, during which she appeared in three movies.

“If you just glanced at it, you would miss me,” she says. “He just had me on the payroll. I was kind of a background really.”

So Olander took drama lessons and ended up at Universal Studios, which changed  her name.

“Eisenhower was just elected president. I think the studio named me for Mamie [Eisenhower] and the Van Doren because they thought I looked more Dutch than Swedish,” she says. “I didn’t like it, but I didn’t have a choice in those days.”

Of Guns, Girls and Gangsters, Van Doren remembers the film came when she and her husband had just decided to separate.

“I couldn’t sleep, so it was a struggle,” she says. “But it was good that I had the movie to get my mind off [the separation].”

The Film Noir Festival screening and day in her honor should leave Van Doren with happier memories of the 1959 film. Now living in Newport Beach and visiting occasionally [most recently to celebrate New Year’s with a friend in 2004], she still considers Palm Springs her second home. “It’s my favorite place,” she says.