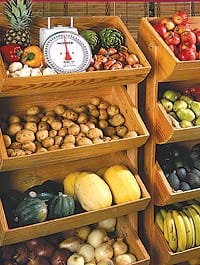 Holy Birkenstock! Organic has gone mainstream. U.S. consumers buy more organic foods than any other group. Nearly three-quarters of conventional grocery stores offer organic products, according to a 2004 study by The Hartman Group of Bellevue, Wash. The typical organic consumer no longer sits on the tree-hugging fringe. Sixty-six percent of consumers surveyed said they use organic products at least occasionally (up from 55 percent in 2000).

The movement has accounted for an increase of 17 to 21 percent in organic food sales each year since 1997, while total U.S. food sales during this time gained only 2 to 4 percent a year. Annual organic food sales — $10.3 billion in 2003 — are expected to reach $32.3 billion by 2009, according to market research publisher Packaged Facts.

It’s difficult to extrapolate statistics specifically for Coachella Valley (growers and retailers are either unable or unwilling to disclose numbers); however, local demand and supply for organic food clearly mirrors national trends.

Peggy Miars, executive director of California Certified Organic Farmers, which represents about 75 percent of organic acreage in the state, says, “In our Desert Valleys Chapter — which includes Riverside and Imperial counties — there were 27 certified organic operations on 3,892 acres at the end of 2004. That’s a 42 percent increase in operations and a 17 percent increase in acreage since 2000.”

Nutritionally, organic food is no different than conventionally grown food, says Pat St. John, spokeswoman for Trader Joe’s. The appeal lies in the pesticide-free products from nongenetically modified crops. “People generally feel organic foods are a more healthy alternative.” Her comments trace to a national consumer opinion poll conducted by Roper Public Affairs on behalf of Organic Valley Family of Farms that found seven in 10 people express concerns about the health risks of pesticides, hormones, antibiotics, and other chemicals used in food production.

“Only five or six years ago, individual farmers mostly sold small amounts of organic produce through farmers markets or health food stores — usually wizened little fruits that were quite expensive,” St. John says. “But as demand has grown, larger, more conventional farmers have been getting into the business, and we’re seeing more options — not just produce, but things made from organic products, like salsas, cereals, and sauces. The prices have come down, and the selection has [widened].”

When the U.S. Department of Agriculture implemented national organic standards in 2002, the niche segment took a richly earned position in the food industry.“Organic is a big part of what we look at when we consider carrying a product,” St. John adds. “We’ll often carry both [organic and conventional products] and see where people want to spend their money.” Judging by the volume of organic products offered at T.J.’s — including dairy, breads, soups, meats, chocolate, and wine, in addition to produce — people are opting for organic in appreciable numbers.

Another indicator of local demand for organic products is the early 2006 opening of a Henry’s Marketplace in La Quinta. Henry’s is part of Wild Oats Markets Inc., a chain of more than 100 natural and organic food markets in 24 states and British Columbia. And Clark’s Nutrition has opened at Monterey Place in Palm Desert.

“We look for good real estate, a growing population of young families with active lifestyles, and higher-than-average education and income,” says Wild Oats spokeswoman Kristy Estes about why the publicly traded firm chose to open a store here. “The organic market is growing by leaps and bounds, and as people become more educated about why it’s good for you, they’re seeking out stores like ours.”

Albertsons, with about 2,300 stores in 31 states, claims to be one of the first conventional supermarkets to offer organic products and continually expands selections in this category — even offering its own brand of organic juice, Essencia. About 700 of its stores have a Healthy Harvest aisle of natural/organic product offerings, says Lilia Rodriguez, the company’s public affairs manager. “It’s all about convenience,” she says. “Customers can get everything they want in one trip.”

And talk about mainstream: Wal-Mart Supercenters, which has eclipsed Kroger as the largest U.S. grocery retailer, carry organic products such as yogurt and spaghetti sauce.

Many smaller growers and retailers have been believers all along. “We’ve always been organic,” says Brad Milliken, whose Four Apostles Ranch in Bermuda Dunes has 10 acres of certified organic dates in production. In business since the 1970s, Milliken sells directly to consumers, at farmers markets, and through his own Web site (www.fourapostles.com).

Harvest Health Foods on Highway 111 in Palm Desert is another longtime resource. Established in the mid-’70s, it was bought four years ago by Laura Laffranchini, who moved the business into larger quarters after a truck crashed into the original storefront. Her sister Jennifer runs the produce operation.

“We’ve seen business quadruple since we opened the new store,” Jennifer says. “And the availability of organic products has really grown. Two years ago, we had only a handful of fruits and vegetables in a small bin. Now, we have at least 60 different produce items on a weekly basis.” She also credits Luscious Lorraine’s, an organic deli inside the store, with making the enterprise “more well-rounded.”

“If people are health-minded, they’re realizing that going organic is essential,” she adds. “And a lot of younger customers want organic foods for their children. For us, this is a passion as much as it is a business.”