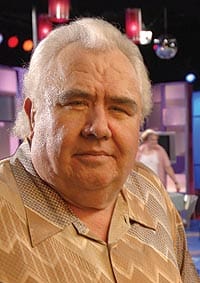 It was mid-June when Palm Springs resident Frank Olsen realized he had hit a milestone. The weekend of June 23-24 was a major event for the gay community, which was celebrating “pride” festivities in six major U.S. cities.

Olsen was in San Francisco for the occasion, but wasn’t so much celebrating Gay Pride as a television first — one perpetuated by his own company, Q Television Network.

The year-old cable network designed to show “our life, our way” was in the midst of a 24-hour marathon broadcast linking New York, Atlanta, Chicago, San Francisco, Houston, and Honolulu in rolling coverage of the parades and festivities.

“Very few people get to live to see their dream realized,” Olsen said later of the experience. “I sat on that couch watching six television monitors and saw six gay communities in six different cities, and I was amazed because I lived to see my dream come true.”

That dream was to develop a cable network that would help bring the gay community together. The concept for Q Television came to him, appropriately, while watching television. “I was sitting on a couch watching CBN [Christian Broadcasting Network] and saying to myself that there is no other audience more loyal than Christians than the gay community, and they deserve a channel.”

Olsen launched Q Television in September 2004 and has watched his little network grow quickly to gain notoriety nationally and internationally. Its downtown Palm Springs offices have a steady stream of visitors as QTN works to expand programming and viewership. Olsen quickly points out that gay television is not pornography — it is about community.

By the end of July 2005, it had a reach of 16 million households nationwide, with programming being seen in parts of Australia, Germany, Canada, and France.

“I want it bigger!” exclaims Olsen, whose 35 years in broadcasting have been marked by reaching niche markets. One of his early successes was founding the first radio station focused on African Americans and their culture. He also developed The Hospitality Movie Channel to bring premium movies to hotel guests.

QTN is subscriber-based, costing $7.50 a month. While some may see that as a detriment, Olsen views the subscription service as a plus because it brings revenue to cable companies, giving QTN what he calls “staying power.” He also says it gives him more freedom in programming by not having to play politics with the basic cable community.

At present, QTN is one of three networks competing for the gay audience. LOGO, launched by Viacom in June, is on basic cable in many areas, while QTN and HERE! are subscriber based. Olsen believes there is support enough for all three, equating viewers to restaurant-goers who tend to try many dishes to satisfy their appetites.

QTN is building its reputation through broadcasting events live and introducing gay communities to one another in real time. Last March at the White Party and Kraft Nabisco Championship [still known in the gay community as the Dinah Shore tournament], the network transformed a former Mexican restaurant on Tahquitz Canyon Way in Palm Springs into a studio for four days of live shows, complete with guests and a house band.

They have taken the show on the road to Disney World in Orlando and in June spent a week broadcasting live from Atlanta before launching their marathon Pride broadcast.

All of that live coverage is just a precursor to the “big event” next summer. Q Television has exclusive television, radio, and Internet rights to broadcast Gay Games VII, scheduled for July 15-22, 2006, in Chicago.

Discussing the games only whets Olsen’s appetite for more.

“Next thing is to bring the gay world into the U.S. — gay Russia and gay China, and gay Thailand, gay Israel.”

Despite the international scope, he’s certain of one thing: that no matter where the network reaches, it will always be based in Palm Springs.

“First, [the city] has a large gay population,” he says. “And two, it doesn’t have all the political gay fronts that some people do. We can celebrate being gay but not have to adopt an agenda here.”

His enthusiasm is evident.

“Palm Springs is the most wonderful place in the world. It is the home of Q Television.”