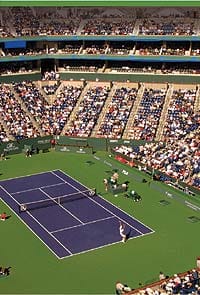 In 1981, when former top-ranked tennis champion Charlie Pasarell took the helm of what is now the Pacific Life Open, he probably never imagined what the tournament would look like nearly 25 years later. “We had 10 weeks to build a temporary stadium at the La Quinta Hotel Tennis Club,” he says before recounting — with no small amount of head shaking — a series of calamities that included a broken water main that, for a time, turned the area into lakefront property. “We literally finished painting the lines on the courts as the players arrived. But it was fun and we learned from it, and all of that experience played into the vision I had for what this tournament could be.”

Celebrating its 30th birthday this year, the Pacific Life Open (March 7-20 at Indian Wells Tennis Garden) has much to be proud of, especially when you consider that from those humble early years, the tournament has blossomed into one of the premier stops along the ATP and WTA tours — one of only six major events to host players from both the men’s and women’s games.  With prize money topping a combined $5 million, it’s also one of the most lucrative tournaments.

The lineage of players who have won since 1976 reads like the Hall of Fame — Connors, Becker, Sampras, Navratilova, Graf, Williams — and this year’s roster is equally impressive, with Andre Agassi, Andy Roddick, Maria Sharapova, and Lindsay Davenport all expected to contend for titles. It’s nothing new for those who have watched the tournament since the early days, like Assistant Tournament Director Dee Dee Felich.

“I took Boris Becker to get his driver’s license,” she says. “At the time, only three of us were working in the office, and when he said he needed to get a license, I was the only one available. A lot has changed, obviously.”

Today, more than 800 volunteers help maintain order. That seems like a large number until you consider that tournament attendance has topped 200,000 spectators for each of the last four years, with 2004 drawing a record 267,000. Estimates suggest the tournament serves up $100 million in gross economic impact on Coachella Valley.

Attribute some of that success to the Indian Wells Tennis Garden. Developed in 2000 after it became clear that the tournament’s previous home — Hyatt Grand Champions in Indian Wells — was simply too small, the garden seats more than 16,000 spectators and offers 20 world-class courts, two Har-Tru clay courts, luxury boxes, 12 broadcast booths, 7,000 parking spaces, and about every other accoutrement any fan and player would desire.

That’s not to say odd happenings haven’t bumped things around in the past. There was the year of the wind, the year of the heat, and, most memorably — if not most unfortunate for all involved — the year of the Williams sisters. In 2001, Venus and Serena Williams were to face off in the women’s semifinal on national TV. But Venus pulled out with an injury minutes before the first serve. Intense jeering from the expectant fans ensued, and Serena went on to capture the title that year over Kim Clijsters. But the damage was done: Neither Williams sister has returned. Yet, the tournament has lost none of its luster. If anything, the prospects for continued success appear very bright.

“We are constantly looking at ways to improve the experience,” Pasarell says. He notes the travel packages that have become a mainstay for the tournament (75 percent of those attending come from outside the desert). Indeed, the Pacific Life Open has become more than a sporting event; it is a destination affair. “People travel here from all over the world. Outside of the U.S., tennis is behind only soccer and grand prix racing in popularity, so people come here and it is their vacation. They plan for it all year.”

This year also marks the debut of the Pacific Life Open Club Championships, an amateur doubles tournament held at clubs throughout Southern California, with the championship convening at the garden during the Open and ticket proceeds benefiting the Prostate Cancer Foundation.

The biggest draw, still, is the phenomenal tennis played from the qualifying matches to the finals by the finest players in the world. We’ll leave the balloons and the cake for another day, but rest assured this 30th birthday should be a literal smash.