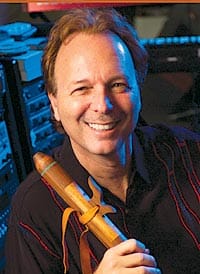 A kayak bobs in icy, turbulent water, surrounded by some of the planet’s most fearsome predators. More than 20 feet in length and weighing several tons, these behemoths can exceed 40 mph in pursuit of their prey. But the relatively tiny land-dwelling mammal in the kayak makes no effort to retreat to the warm, dry safety of his desert home. In fact, he has gone to great lengths to get this close.

“I feel no fear,” Paul Gilman says. “I almost feel protected by them.” And so the Palm Springs-based composer sits serenely in the kayak and communicates with the killer whales through the sounds of his flute.

“We’ll hear more from the people involved in the project, and we’ll expand on all the stories and include a lot more footage and music to take you deeper on the journey,” Gilman says. “The short film was a teaser.”

Gilman credits several guides with helping him on his journey, including Native American spiritual leaders and noted scientists.

“A revered Hawaiian wise man, Abraham Kahuna Kauai, told me that I would carry the message of the whales and dolphins through my music and I needed to share it with as many people as possible, and I’m honoring that,” Gilman says.

The words changed the course of his career. “At the time I was actually producing CDs for Papa John Phillips,” he says. “The studio was booked two weeks in advance with him, and after seeing the Kahuna I just said, ‘John, I’m going to Hawaii and work with dolphins.’”

His travels eventually brought him into contact with humpback wales, which he calls the keepers of the secrets. To encourage them to share their secrets, he reached out in a language he felt was much like their own: music.

Other humans have attempted to communicate with cetaceans through music, but Gilman has distinguished himself. “A lot of scientists come up with a tone the whale understands, and then they play this frequency in the water that will give you a headache,” Gilman says. “I think music has emotion in it, and they respond to the emotion.”

Different groups respond to different key signatures, says Gilman, who doesn’t chase whales; rather, they hear him playing and come right to him and sometimes invite him to join them.

“In Tonga in the Cook Islands I was invited by the whales — I don’t know how else to put it — to swim between a 40-foot whale and her baby,” Gilman says. “That’s very rare in nature that they would allow something like that. And we don’t use any food or tricks; the only conduit is music.”

Music gets the animals’ attention and helps establish the connection, but the thoughts and feelings that accompany it make up the real message, according to Gilman.

“Anybody could play an instrument and see what happens with a whale, and [the whale] probably won’t have much to do with them,” Gilman says. “But when I’m playing, I’m 100 percent connected to them, and I know the difference. I’m all in with it and I’m playing. I can feel their connection on a multitude of levels. It goes really deep.”

Gilman hopes his documentary will give other people a sense of that connection. “Their intelligence and the beauty are what we’re really sharing through Ocean Odyssey,” he says. “And I hope that it affects people in a positive way.”