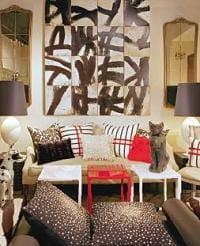 The heavy glass doors of House 849 — the furnishings, art, and accessories behemoth on North Palm Canyon Drive in Palm Springs — swung open for business in January, before landscapers could finish paving the entryway. No matter for the steady stream of curious interiorphiles who walked through mud for the first glimpse of the showroom’s 8,000-plus square feet of eclectic treasures.

Inside, a world market unfolds, with hallways lined with curio cabinets (the doors reclaimed from wardrobes circa 1929 at Hollywood’s Argyle Hotel, now Sunset Tower); walls of fine paintings, including a 15-canvas installation of sumi-e; grand rooms, one with a rustic chandelier hovering above a mahogany dining table punctuated with cowhide chairs for six; and many more niches and vignettes rich with French armchairs, fur throws, animal statuary, and beribboned throw pillows.

Expressive Mexican folk art of santos and la Virgen Maria con niño, pop art (from Batgirl to the Campbell’s Soup girl) by Los Angeles-based Dave Wilcox, African masks and drums, and a trophy kudu’s head with its spiral horns all call this meandering "house" their home — and so does the store’s resident redhead: a spunky little terrier mix named Ruby.

Just when you think you’ve figured out this place, you turn a corner and discover items even more exotic and aestheti-cally breathtaking. House 849’s globetrotting inventory offers more eye candy than most can comprehend in one visit — which accounts for the steady traffic well after "season" ended in town. Drawn in by this big box of a store and its beckoning Tiffany blue and chocolate brown logo, passersby often marvel at how this gigantic retail showplace suddenly appeared in Palm Springs’ Uptown Heritage District, like Dorothy’s clapboard plunked down in Oz.

"We actually came here to retire," says co-owner Nick Carnegis, a former interior designer who relocated here three years ago from Houston with his partner, co-owner Robert Kuperman. They left behind a design firm and commercial real estate business, respectively, to kick back and live a little — sunshine, vistas, and afternoons by the pool. When they purchased a home here, however, their vast collection of antiques and furnishings wouldn’t fit within their walls. They put some pieces in storage and carted the rest to an open storefront at the Galleria, dubbing it "One Night Stand."

Opening a retail space "started out as kind of a hobby, but we got a taste of it and liked it," Carnegis says. Months later, Kuperman envisioned a more commanding space, and the pair agreed on a massive showroom in the building erected in 1967 as the local post office. The space was later home to a flea market and a Mexican imports store. Now it’s a resource increasingly on the lips of interior designers with discerning clientele who are tired of driving to Los Angeles every time they need a few choice embellishments.

The store’s vast selection reflects the diversity of tastes and home styles throughout the area like few other retailers can, making homeowners a significant part of the clientele as well.

"People tend to have homes elsewhere in the country, with a hideaway here," Carnegis says. Stocking contemporary and traditional elements, House 849 furnishes both, shipping weekly to residences from Oregon to the East Coast. Depending on the client, an impulse buy could be the $95,000 pair of giant Chinese Fu dogs or a $75 three-wick candle scented in Egyptian Cotton or Rioja.

The ballroom-sized main room leads to a long hallway, off which smaller themed salons surprise and delight with vignettes of art, antiques, and accessories — all continuously restocked and restyled; with brisk sales, the store reinvents itself almost weekly. "We don’t reorder or go after the same things just because they sold well when we had them," Carnegis says. "It’s here and then it’s gone and we move on. We’d rather be ahead of the game than repeat ourselves."

And although this store is not an art gallery, House 849 has a fine inventory of sculptures, etchings, intimate watercolors, and large canvases. Sharp collectors will find the occasional gem, such as the pair of limited-edition lithographs by the prominent midcentury German surrealist Paul Wunderlich (represented extensively at The Hart Gallery on El Paseo in Palm Desert) or works on canvas and paper by L.A. urban decay artist Gabriel Rivera, the headliner at the store’s grand opening. Pieces span from 1920s to contemporary, with emerging artists such as Purvis Young, the raw, outsider artist from Miami, and John Palmer, a free-form painter from Texas. The hand behind some pieces remains unknown.

Carnegis, whose former firm specialized in commercial design, had his way — actually, many ways — with the interior. "[My firm] did every different look, so I learned to like everything," he says. Now he and Kuperman stock the space with pieces that appeal to them on any particular day, along with a deep assortment of furnishings and accessories that Kuperman amassed unabashedly after completely furnishing his home. "He always liked to go shopping," Carnegis says of his partner, who has a commercial real estate and property management background.

The store’s locale draws its share of tourist traffic — including, on one visit, a group of women from Canada who were unsure what to make of the zebra skin-upholstered wingback chair with the spiky black mane firmly in place.

House 849 is among several home-design storefronts on this end of town, each connecting famously with the growing number of residents — and their designers. This uptown design mile has treasures in Chinese antiques at Dwight Polen (768 N. Palm Canyon Drive), artful African and world-ranging accessories at Things I Like (668 N. Palm Canyon Drive), and an incredible assortment of tchotchkes at … Tchotchkes (650 N. Palm Canyon Drive). With several design and lighting stores (and three empty retail spaces) nearby, House 849 could reasonably anchor this stretch of the town’s main drag — an evolving destination for all things midcentury, contemporary, classic, artful, and safari.

And with its wide entryway, flanked by a fledgling sculpture garden, you now can enter without first muddying your shoes.