The Legacy of the Salton Seafarers 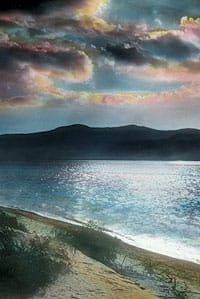 Scurvy, grog, “Yo, ho ho!” and the salty god Poseidon. Does any of this bring to mind the most unoceanlike Salton Sea? Probably not, if you have glimpsed the sea from only a desert highway. But in fact this come-again-go-again sea claims its own famous navigators and sea yarns, linking our little ocean to the great sailing traditions of the world.

Imagine, especially, those lucky salts who were around when the sea formed. The earliest mariners must have felt the same excitement in their chests, the same glory circuits lighting up in their brains as the Vikings exploring the North Atlantic or John Wesley Powell descending the Colorado River for the first time.

One such glory-seeker was former cowboy, geographer, and world explorer Godfrey Sykes. Sykes, who had sailed the Atlantic many times and twice circumnavigated the globe, was living in the desert in 1891 when passengers on a Southern Pacific railroad traveling south of Mecca spotted a growing glimmer that looked like a body of water in the dry Salton Sink.

When word got out about the sudden appearance of a big lake, people were worried. Almost every culture has a flood myth wherein mysterious waters rise to engulf the impure. In this case, no one was quite sure where the flood was coming from or when it might stop.

The cautious headed for high ground. Sykes, on the other hand, borrowed tools and hammered together a skiff on the riverbank near Yuma. The townsfolk supplied cans of food — labels washed off by the rising water — and the adventurer scrounged up a sidekick known as Beer Keg Tex — “an excellent campmate but an indifferent wader in mud,” Sykes would later say.

“We tossed overboard such cans as were not to our taste or which did not harmonize with the menu we had planned,” Sykes wrote in The Desert Magazine’s September 1942 issue. On that maiden voyage from Yuma to the little seaside town of Volcano (now gone), mud and shallow waters stopped them from crossing the sea. They abandoned the skiff, sticking two oars upright in the sand as markers. Then they hiked out, surviving on coyote cutlets until they reached civilization.

The boat and upright oars were never seen again.

Not far behind Sykes was Harry Patton, a newspaperman from the Banning Herald. With a sidekick named Converse, he attempted the same route as his predecessor, shooting rapids, dodging waterfalls and generally bucking down the wild Colorado into the Salton Sea on a flat-bottomed boat.

But the sea receded again, leaving only a damp slick, and the helmsmen had to put away their boats and dreams.

One hundred years ago, in 1905, the Colorado River flooded and the water rushed back into the sink, forming the Salton Sea we know today. It was again an occasion for panic; residents in the path of the flood dug out with shovels and saucepans. To bolster broken levees, they dragged mattresses from their shacks and chopped down their precious shade trees, all the while singing hymns to appease the weather spirits.

Despite the chaos, Sykes could not resist another voyage of discovery. The sea was still rising each day when he camped along the shore and again single-handedly built a boat. Some cronies — botanists and geologists — joined him on a 150-mile promenade around the new shoreline. With little fanfare, they had completed the first circumnavigation of the Salton Sea.

As they unloaded gear at the close of the expedition, their admiral beckoned to a “farmer-like individual” watching on shore and gave him the boat to save the trouble of hauling it away. Thus some unwitting Imperial Valley farmer inherited our local equivalent of the Santa Maria: the first vessel to explore the Salton Sea.

In 1906, Southwest travel author George Wharton James cast off from Yuma on a “mere tub” of a craft. Bouncing into thorny mesquite head-on, James managed to note the bird life for which the Salton Sea has become famous. There were ducks, geese, and pelicans by the hundreds — more than the author had ever seen — “whirling and circling, doubling and countering, rising, and falling.”

Once, while listening to the waves, Wharton was transported to other seas he had known, “where monster freight steamers and sailing vessels shouldered their way through the blue waves. I heard the merry music of the orchestra on the pleasure steamers, and the dull thud of engines and the throb of the revolving screw of a great transatlantic liner,” he wrote in Wonders of the Colorado Desert.

Years after, in 1922, renowned conservationist and author Aldo Leopold added his name to the ranks of Salton seafarers. He explored the lower Colorado delta in a canoe with his brother, Carl.

“The experienced delta hands they consulted duly warned them of the tidal bores, waves taller than a man, that would reduce their craft to kindling, and of the hungry sharks that followed the tide far up the river,” writes William deBuys in his Salton Sea classic Salt Dreams. The sharks were fiction, but the waves were real; a year earlier, 130 people drowned when a tidal bore capsized the river steamer they were riding.

Hunting game among the tangled vines and willows of the delta country just south of the sea, the Leopold brothers encountered no such calamities. In fact, the voyage inspired a pastoral essay in Leopold’s famous treatise, “Sand County Almanac.” “All of this
was long ago and far away,” he writes. “I am told the green lagoons now raise cantaloupes. If so, they should not lack flavor.”

Jump ahead eight decades and the green lagoons had turned to neon lime when writer William Vollmann, known for his explorations of Bangkok brothels and Bosnian battlefields, took on the sea. Vollmann inflated a little yellow dinghy, purchased for $70, and hired a guide, Jose, a modern counterpart to Beer Keg Tex.

“I would ride the New River from its source in Mexico to the Salton Sea, which I’d never heard of anyone doing,” he declared in a February 2002 article in Outside magazine.

Even at that recent date, the New River was so little traveled that Vollmann felt like a pioneer. The danger, he wrote, the 114-degree heat, and the isolation combined with “the surprising dramatic loveliness of the scenery … made me feel as if Jose and I were explorers of pre-American California.”

A backdrop to all these sea stories over the last century or so has been the regular sighting of a ghostly lost ship. Indians, travelers, and prospectors all have reported the discovery of a wrecked galleon somewhere in the Salton Sea basin. The details vary, but the tales include a haunting image of broken masts protruding from the sand where no ship should be.

Along with Sykes, James, Vollmann, and the ghost ships were the hydroplane racers of the 1940s, the bathtub racers of the ’50s, the Navy boats stationed at the WWII naval base on the Southwest shore, the Jet Skiers, fishing skiffs, and the occasional plucky windsurfer.

Today, changing sea levels are again rewriting the history of boating on the sea. U.S. Fish and Wildlife biologist Todd Stefanic says, “The water levels have dropped and you can’t get a boat in anywhere anymore. The only people I see on the sea are duck hunters in real shallow johnboats.”

The water may ebb and flow, but as long as there is a Salton Sea, there will be skippers ready to pound together a few planks, gather some grub, and write their own story of the sea.