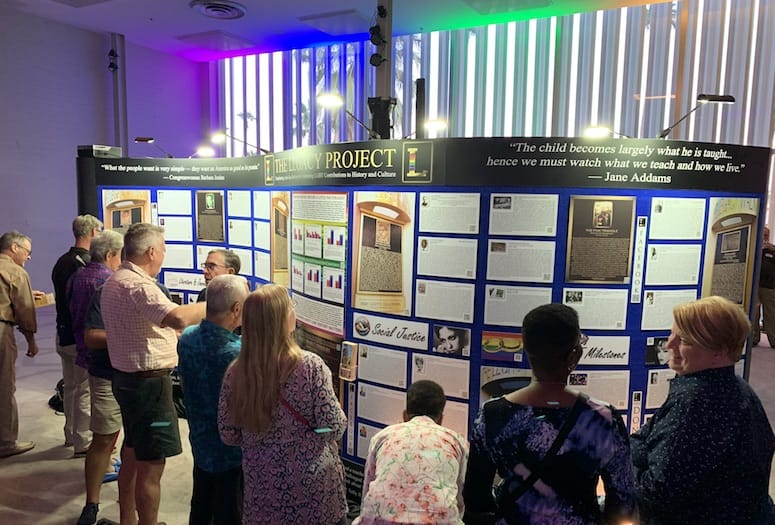 The Legacy Wall can be viewed initially at The Bank on South Palm Canyon Drive until Nov. 6, and then will move to the Palm Springs Public Library.
PHOTOGRAPHS BY JIM POWERS

Gay activist Victor Salvo has made it a point to ensure that LGBTQ history is shared with the world.

The Legacy Wall, a digital interactive traveling wall founded by Salvo, is in Palm Springs for the next month, kicking off with this week’s Greater Palm Springs Pride events. The Legacy Wall has been initially placed at The Bank, an event space on South Palm Canyon Drive, from Oct. 29 through Nov. 6, and then will move to the Palm Springs Public Library from Nov. 12-23.

“Who’s going to remember who came before us (LGBTQ) when we’re gone if we don’t know ourselves? That’s the core concept of why I felt the project needed to exist. It had to be publicly accessible and it had to be free,” says Salvo.

The 360-degree double-sided island that is nearly 400 square-feet with LED lighting, above and below, was created to share the stories of over 125 LGBTQ historic role models like social justice pioneer Jane Addams, transgender icon Marsha P. Johnson, and Mexican artist Frida Kahlo. Salvo says he has written 65 percent of the biographies, principal author and co-founder of Legacy, Owen Keehnen, has taken care of the other 35 percent. Lori Cannon, also a gay activist, is another project co-founder.

The Legacy Wall, which was conceived in Springfield, Illinois, made its debut in 2015 to send a message to the world that individuals who identify as lesbian, gay, bisexual, transgender and queer have been key figures in history. Salvo says the wall is particularly a symbol of identity for youth just coming out.

“It is intended to help provide them with a vital context for their lives, because many of them grow up without sufficient support systems, and certainly, in most cases, without the benefit of even being aware that there are historically significant LGBTQ role models,” says Salvo. 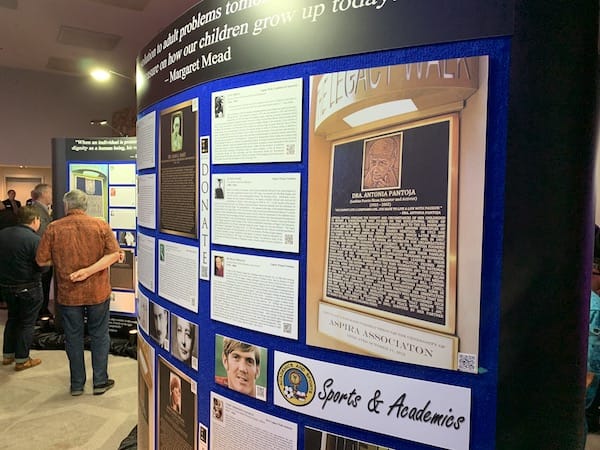 While it was first a private search enterprise for Salvo, it took 20 years before he mentioned his idea of creating The Legacy Wall to anyone. Personally, he conceived the idea of the project as a whole in 1987.

“I’ve been a gay activist for 40-some years,” he recalls. “So I was pretty well connected. When I was ready to finally talk about it, I sat down with the publishers of all the publications who were sort of [shocked] that I had been working on this all this time, and had never told anyone about it. They arranged simultaneous front page stories of all the publications that all came out on the same day. So when we went public, we went public.”

“The Legacy Walk” is an outdoor museum in Chicago, a mile of bronze memorials to historic LGBTQ figures. An educational component is a collection of lesson plans and multimedia study guides for kids and teens.

“By the time [the project] went public, I had already developed a fairly substantial amount of content in anticipation of the launch of it,” says Salvo. “But since that time, what had been the quiet work of one person has been replaced by many hands now, so I cannot take credit for all that it is now.”

The Legacy Wall also consists of QR codes that can be scanned by a smart phone to open up a biography and give a user the ability to watch videos about each historical figure on the wall. “All the educational materials are there. It makes it more of a multi-dimensional experience for the user, and kids especially like it because they like video,” says Salvo.

While at the exhibit, individuals can request a research syllabus that consists of information about each historical figure as well as searchable book titles that are available on the wall itself when scanning its code.

“I see Legacy’s really in a transitional stage right now. This is our game changing year,” says Salvo. “And we still see our outdoor installation, [the walk in Chicago] was just declared a historic landmark within two weeks of the education bill passing. And now we’re writing the curriculum, and being able to bring the wall [to Palm Springs] is a huge deal for us, because so many people also live someplace else.” 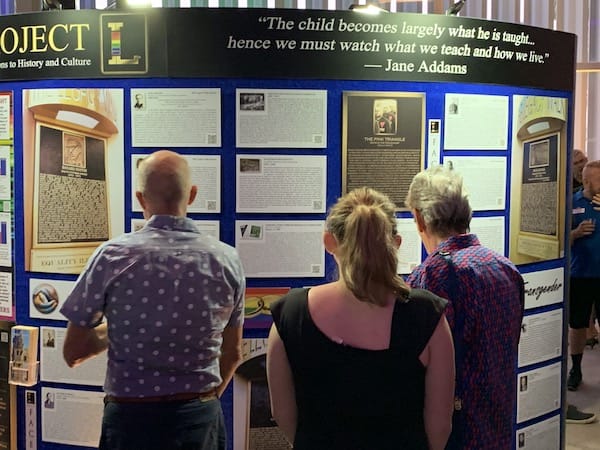 Salvo and his team hope to expand the wall’s horizons to Europe by 2021. Although the wall is only available in English, he says work is being done to develop an app that will make it user-friendly for the public to scan a QR code on each element and have it read back to them in the language of their choice.

“People are so overwhelmed in their reactions to it. It’s very gratifying to do this kind of work,” says Salvo.