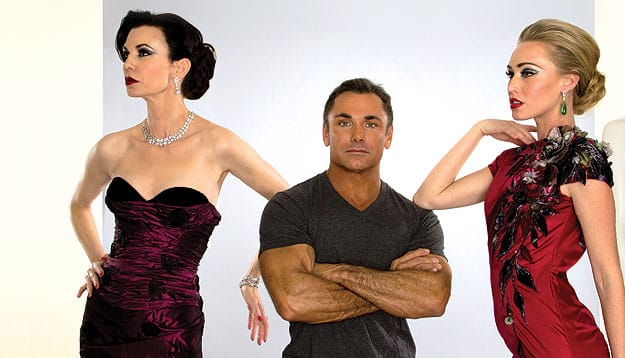 Traditional wisdom says that you don’t get very far in life while sitting and waiting for the phone to ring. But for designer Mark Zunino, a phone call is exactly what began his path to becoming famed costume designer Nolan Miller’s right-hand man and, today, one of the last great couture-style clothiers in the United States.

In 1984, Zunino was studying advertising and marketing at Pepperdine University in Malibu, having switched emphasis from the architecture program that originally brought him to the school. “It was more creative and more fun [than architecture],” he says, noting that graphic illustration classes revved his artistic engine. He completed the required fashion illustration course without much thought — until a year later, when the phone rang.

“It was my teacher calling, looking for a design assistant,” Zunino recalls. “Fashion wasn’t my emphasis, but the job was for Nolan Miller and Aaron Spelling. And I wanted to meet them, so of course I went.”

The job they had in mind for him was in the wardrobe department of Dynasty, Spelling’s epic 1980s primetime soap about the money, glitz, and excess that came with being in the oil business. Miller’s fashion creations for the show produced a sartorial era defined by mile-high padded shoulders and enough sequin gowns to fill an Ice Capades, cabaret show, and circus combined. More curious bystander than aspiring fashion designer, Zunino knew he wanted to be part of it.

“It was a bizarre reality,” Zunino says of his Dynasty days, when he helped outfit Joan Collins, Heather Locklear, and Linda Evans in Miller’s shiny objects.

He thought he’d stay a year. Then the phone rang, again.

But Zunino’s father still wanted to see his son in a more stable profession. So Zunino invited his family down from the Northern California town of Vacaville, where he spent most of his childhood, to see what he did at work. And it just so happened that Ann-Margret and Sophia Loren were on set that week.

“Yeah, Dad gave me his blessing,” Zunino says with a chuckle.

Once Dynasty ended its 11-year run in 1991, film and television budgets were shrinking, and Zunino was designing collections under his mentor’s name. Meanwhile, he really wanted to create custom, dazzling gowns for the Hollywood legends in Miller’s repertoire — which at the time included Lana Turner, Bette Davis, and Barbara Stanwyck — that had a younger edge and could lend a more progressive feel to the standardly sequined house of Miller.

The duo sometimes butted heads at how “progressive” these new designs should be. Not wanting to tarnish his reputation, Miller told Zunino to start adding his name to the labels on his pieces. So two racks sprouted up in Miller’s studio: one with Miller’s traditionally glitz-fueled, ’80s-style gowns and another with the sheer, form-fitting pieces that comprised the Nolan Miller by Mark Zunino line.

“Sophia Loren came in one day and went to my rack and picked up a sheer lace dress for an awards show,” Zunino recalls. “Then Nolan came in and Sophia goes, ‘How do I look?’” Miller scoffed at his longtime client for not choosing a piece from his rack, and Loren was confused.

“Do I not look sexy?” She asked the designer. “Do you not like my legs?” Of course, both questions were rhetorical. Though Miller played the part of sore loser, even he couldn’t dispute the splendor of the Italian bombshell’s legs in Zunino’s cocktail dress.

Zunino formally took over Miller’s company a decade ago. As he prepares to headline Fashion Week El Paseo this month, he also is busy helming The Mark of Style, his line of clothing and accessories for QVC, as well as Miller’s QVC costume jewelry line that he took over after Miller formally retired last July.

A new set of Hollywood superstars — Angelina Jolie included — has embraced Zunino’s custom couture. This fall, he will launch a line of wedding dresses, which will likely make their debut on the Fashion Week El Paseo runway.

Although this will be his first official bridal collection, Zunino has experience in the wedding game. “When Heather Locklear married Richie Sambora [in 1994], she was so unhappy with her wedding gown that she called me,” he says. “I had two days to make a dress for her, so I did a French lace halter dress with a bolero. That was the first time, I think, that I saw someone in such distress that we made so happy. That was a turning point for me.”