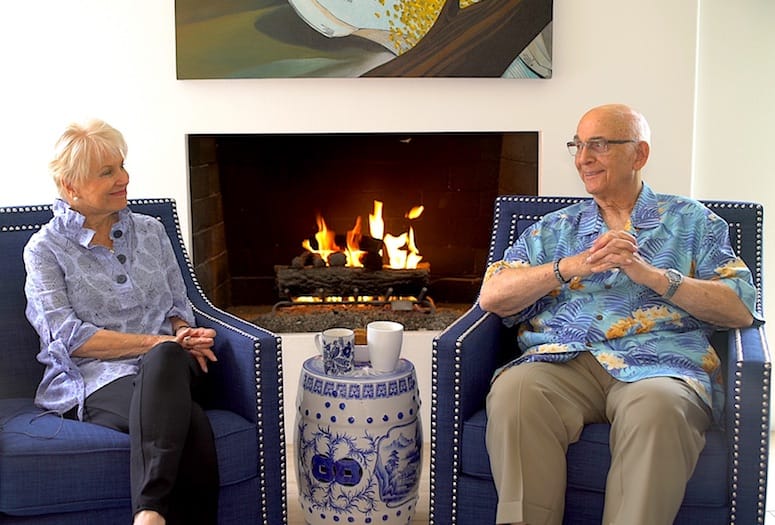 It was the 1970s, and witches and genies were on their way out, replaced by more realistic characters. A pioneer in the field of comedy, The Mary Tyler Moore Show broke rules, glass ceilings, and occasionally hearts with brilliantly written, comedic storylines with an edge, as well as provided opportunities for women in the male-dominated television world. Gavin MacLeod and Joyce Bulifant portrayed brown baggers Murray and Marie Slaughter, the everyman/woman of the working world.

Bulifant invited Palm Springs Life and her onscreen husband into her home where we snacked on tea and cookies, dished on their personal lives, and how they intersected with The Mary Tyler Moore Show.

Did you know The Mary Tyler Moore Show was going to be a success from the beginning?

MacLeod: No. We almost didn’t make it to air. We had to shoot the pilot twice. We did it on a Friday night, and the network wasn’t going to take it. The network was very concerned about Rhoda because they thought she was unlikeable. The script supervisor suggested that if Phyllis’ daughter Bess liked Rhoda, it would soften her up a bit. The writers added a line for Bess, “Aunt Rhoda’s really a lot of fun. Mom hates her.’ We shot the pilot again on a Tuesday, and the network accepted it.

Women in positions of power were scarce back then, but The Mary Tyler Moore Show was at the forefront of giving opportunities to women.

MacLeod: We had an avalanche of talented women: writers, directors, producers. Grant Tinker (producer and Mary Tyler Moore’s husband) really opened the door for a lot of women. They were so inventive, these writers, all of them felt free to speak up. You’d say something, then they’d get an idea, and suddenly it was in the script.

VIDEO: Gavin MacLeod reveals the episode of The Mary Tyler Moore Show that produced the most mail to him.

How did you two meet?

Bulifant: I don’t remember, do you?

Bulifant: Oh, that’s right! I played Tim Conway’s girlfriend. He was a funny guy. He made me laugh all the time. I loved him doing the dentist on The Carol Burnett Show.

MacLeod: Funny story about Tim and Ernest Borgnine (who played McHale). Ernie was engaged to Ethel Merman. There was an engagement party, and we were all invited. I couldn’t imagine the two of them together, but I was so excited to meet Ethel Merman. So Tim and I, and our wives, we show up together, and we’re seated at the same table for dinner. After a bit, someone yells out “Ethel, sing!” By this time, Ernie’s head was on the table, and Ethel grabs him by the shoulders from behind and sings, “They say that falling in love is wonderful.” We all listen, and when Ethel finishes singing, there’s applause, and after it dies down, Conway yells, “Again!” And she did.

(Borgnine and Merman were only married for 32 days before they split. Borgnine cited the reason in a 2011 interview with The Hollywood Reporter as, “I got more attention on our honeymoon than she did.” Merman allowed him the last word, but she took the last jab. Merman released an autobiography in 1978, and the chapter titled “Ernest Borgnine” was just one blank page.)

How much fun did you have filming the episode “Chuckles Bites the Dust,” in which a rogue elephant kills the station’s children’s programming host off-screen? In 2009, TV Guide ranked it No. 3 in “TV’s Top 100 Episodes of All Time.”

MacLeod: The interesting thing was Jay Sandrich, our resident director, didn’t want to direct it. He said ‘death isn’t funny’. So they got Joan Darling, an actress, to direct it. It was the first thing she directed, and she got an Emmy.

A Son For Murray

Before it was common to adopt children from other countries, in the 1974 episode “A Son For Murray,” Murray wanted to have another child, but Marie didn’t want to go through morning sickness and all that comes with childbirth again. In the end, they adopted an adolescent boy from Vietnam.

Bulifant has a backstory to that episode straight out of her own life. As a child, she spent a great deal of time living in orphanages and foster homes, and as an adult, Bulifant has advocated for unwanted and disabled children. She is executive vice president of The Dyslexia Foundation and founder of the Hans Christian Anderson Award, which recognizes dyslexics who make a positive contribution to society. 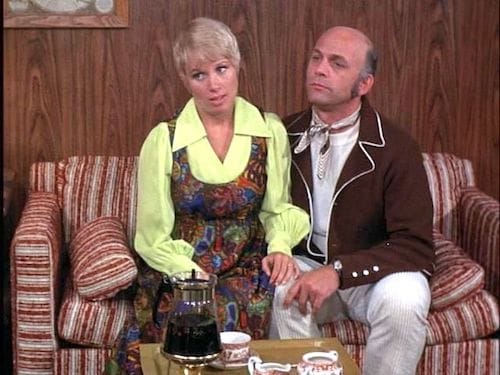 Joyce Bulifant and Gavin MacLeod as Marie and Murray Slaughter.

Bulifant doesn’t stop there. In 2002, she married the love of her life, Roger Perry, who had been sober for six years. Her previous husbands were not. In 2018, she released the book, My Four Hollywood Husbands, about her struggles of being co-dependent in an alcoholic relationship. She had hopes her story would reach someone suffering from another’s addiction. Not only did it impress readers with its raw authenticity, but some of her celebrity friends called and thanked her for writing it. She had never known they had also struggled with alcoholic relationships.

Perry passed away from prostate cancer in 2018. “He had been sober for 22 years, and I got to say all of these wonderful things about him,” she says looking back on the book tour. “It was the last trip we got to take together, and I got to tell all these people how much I loved him.”

For more on Gavin MacLeod’s book, This Is Your Captain Speaking, visit amazon.com. 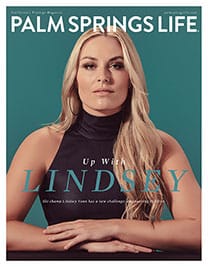