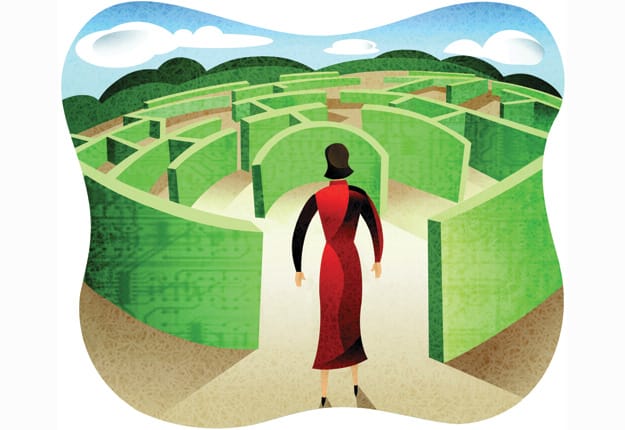 Chris Porter (not her real name) spent her first weekend in a psychiatric ward on a suicide watch “wandering the halls and feeling like
a fish out of water,” waiting for treatment. She had seen a new doctor for the first time on a Friday afternoon; he immediately admitted her to the hospital, fearing for her life because of her severe depression.

“On that Sunday, I was told by the hospital that I was either going to have to leave or pay for everything out of my own pocket, because my insurance declined anything to do with the hospitalization,” Parker says. “So I called the insurance company. I didn’t understand why I had to leave. It was because the policy didn’t cover pre-existing conditions. This was my first appointment with a brand-new doctor, and he admitted me right away. But that was the excuse that they were using.”

Porter left that Sunday night with a $30,000 hospital bill, feeling like “I might as well go ahead and kill myself, because there was no help for me anywhere.”

She was barely functional (the doctor called her ”vegetative”), but she knew she had to fight back. So on Monday, she enlisted the help of a family friend, an attorney. She went through a formal appeals procedure, but the insurance company would not back down.

“They were convinced that this was a pre-existing condition, that there were files somewhere that would show it,” she says. “We had to have affidavits signed by the doctors. None of them had any record that they were treating me for depression or that they had ever spoken with me about it.”

Months passed. Porter quit her job as an interior designer to work as an executive assistant so she could get better healthcare coverage. After multiple appeals, letters, phone calls, and complaints, the hospital agreed to write off the $30,000 bill.

Porter credits her success to staying in constant contact with the hospital. “I made sure I kept them up to date with what my attorney and I were doing and where we were in each step of the appeal process,” she says.

Take Steps to Fix the Problem

Six of California’s largest private insurers denied 47.7 million claims (22 percent of all claims) from Jan.1, 2002, through June 30, 2009, according to the California Nurses Association/National Nurses Organizing Committee. PacifiCare’s denial rate hit 39.6 percent during the first six months of 2009, with CIGNA at 32.7, Health Net at 30, Kaiser Permanente at 28.3, and Blue Cross at 27.9 percent.

Trying to navigate the complexities of denied claims can frustrate consumers, but there is recourse. It just requires patience, precision, and persistence. Most experts agree that it’s best to begin with your carrier to try to resolve the problem. If that fails, there are two state boards that assist in consumer complaints: the Department of Managed Health Care, which handles HMOs, Blue Cross, and Blue Shield; and the California Department of Insurance, which oversees traditional health insurance companies.

“It’s good to try and work it out with the insurance company,” says CDI Deputy Press Secretary Molly DeFrank. “But people can call us at anytime throughout the process if they’re confused or just have questions or if they want to file a complaint.”

In his book Payment Refused, leading health insurance bad-faith attorney William Shernoff recommends patients take notes during every conversation and write down the names of those to whom they speak. Be clear about what you want  from the insurance company, and insist on a written explanation on why your claim was denied, what the next step is, and how long you’ll have to wait. It’s also important to move quickly, because often there are time limits to filing appeals (usually about six months).

If you are unsure what to do, call the membership phone number on your insurance card, advises Aetna spokesman Walt Cherniak. Aetna’s appeal process, for one, is laid out in the company’s certificate of coverage and on its website. Consumers can appeal a denied claim by phone and then in writing; the appeal may then go through a few tiers of review, including internal and external reviews by physicians.

If your matter is urgent, ask for an ex-pedited appeal. (Your insurer must tell you of its decision within 30 days; but for an urgent issue, the waiting period is three days or less.)

Kaiser Permanente spokesman Jim Anderson echoes this advice. Their members, he says, “should contact member services first. Depending on the situation, there will be one or two levels of internal appeal, whether it’s for treatment or for a bill. And if there are external forms of appeal, [members] will be notified if their internal options are exhausted.”

Shernoff, of the Southern California firm Shernoff Bidart Echeverria, agrees that calling an insurance company first can sometimes work. “You can certainly try to give the insurance company or the agent an opportunity to clear it up first,” he says. “It’s better than spending weeks or months writing letters.”

If calls are unsuccessful, file a detailed appeal in writing, including dates and documentation. Follow all complaints procedures exactly for your plan. Keep copies of everything you send (preferably by registered mail) and specify what you want accomplished. Enlist your doctor’s help as well.

“Usually, if you get the doctor to write a letter to the insurance company or to the Medicare administrator or to whoever is contesting the issue, they’re quite effective. They do listen to explanations by physicians probably more than any other source,” Shernoff says. Employer-based plans sometimes have an on-site administrator you can tap into for help.

If your issue is not resolved to your satisfaction or within the required time frame, you may file a complaint with the CDI or DMHC.

“We have a staff of folks who work for the department whose full-time job is taking calls from consumers,” says the CDI’s DeFrank. “We advocate on behalf of the consumer whenever possible. So consumers have someone who will sit down with them, look at their documents, and see if they have a legitimate claim to make. Then we can coordinate with the insurance company and hopefully resolve the issue before it can escalate.”

An Ounce of Prevention

One of the best ways to avoid denied claims in the first place is by scrutinizing your benefits.

“Know what your policy covers, read your certificate of coverage, and check all records thoroughly,” advises Aetna’s Cherniak. “For example, if you’re in an HMO, you might have no coverage provided if you go out of the network for care. We would encourage anyone to be as informed as possible about their health benefits.”

Shernoff stresses the importance of telling the truth on insurance applications to avoid issues down the road, such as retroactive cancellation of the policy (called rescission) — currently a big problem in California.

“Be careful and thorough on an application,” he says. “If you’re not sure of something that’s in your records — some of these applications actually go back to birth — and if there’s no box to check off, I would put in a question mark. Or write ‘I’m not sure’ — something to let them know that you’re not trying to hide anything, so that they can’t use the application against you if you have a serious problem later on.”

“If anyone has questions or is confused or they feel like they’re getting tricked by weird questions, they should definitely call us, and we can help them navigate the process,” DeFrank says.

Porter, for her part, has learned a valuable lesson from her experience: “Now when-ever I get a new policy, I scour it.” She advises people who face similar denials to dig in for the long term. “We would’ve gone to court if the hospital hadn’t written off that $30,000,” she says.

Shernoff agrees that sometimes legal action may be the only option. “You try your best to avoid it by doing the things like reading your policy, becoming knowledgeable about the claims process, and getting your doctor involved to help you,” he says. “If you still have a problem, you may have to resort to legal action.”