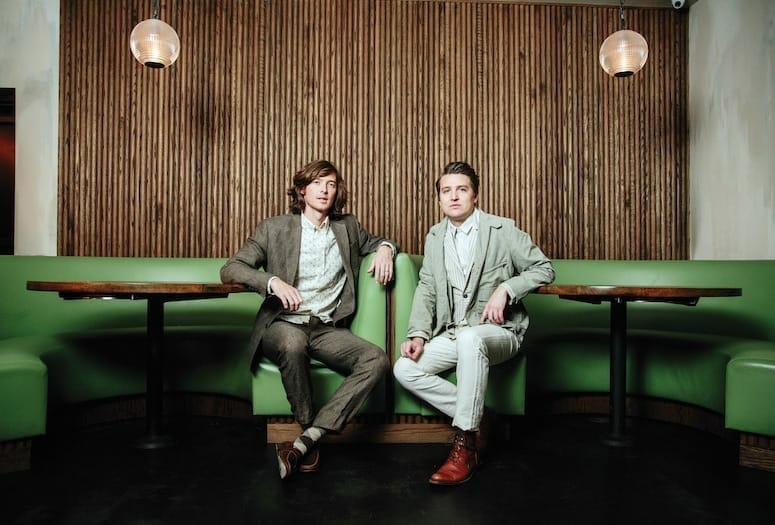 Joey Ryan recalls the first time he sang with bandmate Kenneth Pattengale as a “lightbulb moment.” Ryan and Pattengale met and began making acoustic folk music together in Eagle Rock, California. Inspired by their natural chemistry and buoyed by the encouragement of their friends, the pair abandoned their solo careers and embarked on a 55-city tour opening for folk artist Joe Purdy.

The Milk Carton Kids garnered attention in 2011 for giving their first studio album, Prologue, away for free online. Ten years and five records later, they count two Grammy nods among their accomplishments — plus a top spot on the lineup at the new Oasis Music Festival.

You have some playful conflict going on when you’re on stage. Does that reflect the dynamic in the studio?

Joey: There’s a difference between playful conflict onstage — a tried-and-true duo dynamic from Smothers Brothers to The Odd Couple — and then this idea of doing real work together in a very intimate one-on-one setting. That's when it starts to feel like we're a married couple deciding where to send our kids to school, making huge decisions that we both have to be cool with for the long term. We don't actually fight. It’s creative work, and it's all rewarding. But it's a super intense process to write a song with someone, when at the end it has to be both of yours.

What does your writing process look like for the forthcoming record?

Joey: We go into a room together and, hopefully, one of us has an idea for a song that we want to work on. I guess I would say we fight about it until it's good.

How does playing at a festival differ from your own show?

Kenneth: At your own show, there’s a certain energy that comes with playing to an audience that has followed you for the better part of 10 years. When playing a festival, however, you benefit from a flood of new energy that comes part and parcel of playing to new people and being around the creative forces of all the other bands.

Joey: We don’t know how many bought a ticket to come see us [at our festival set], so we always treat it a bit more like an introduction. There are heightened stakes, like, “We’ve got to do really well to win people over who don't necessarily already love us.”

Kenneth: Both are soul-giving in their own ways!

How do you approach headlining the Oasis Music Festival, which is unusual in that it features artists from different genres playing at various venues in Palm Springs?

Joey: We’ve got our tricks of the trade. It's the same when you're an opening act. It's like a first date instead of a one-year anniversary.

Kenneth: [It’s] probably not much different from the way we prepare for any show: Get your head straight and your fingers limber and be prepared to have fun. That’s the name of the game.

Who are you looking forward to seeing at Oasis Music Festival?

Joey: We came up with White Buffalo in Ventura. He’s fantastic. And I’ve heard great things about Y La Bamba.

Speaking of things you’re into, which artists are you excited about right now?

What was your most memorable interaction with a fan?

Joey: We had a drink with [a fan] after one of our [earliest] shows. Six years later, we heard from them, and they said, "Oh, my dad was going through chemo recently. And I played him Prologue because it's my favorite album. It brought him comfort during that time." I'll be honest, [our fans] are not playing our songs at their weddings. They're playing them when they have illnesses, divorces, breakups. It's an honor to be a part of the worst moments of people's lives.

Why do you think your music resonates with people during those difficult times?
Joey: The songs are sad as hell. A sad song, the act of creating something lasting and hopefully beautiful out of a sad experience, or a tragedy, is inherently hopeful. I think that's what sad songs do at their heart: When we're going through something, they offer some connection, the idea that someone else has gone through something similar — and out of it came art.

I always go to Palm Springs on New Year’s with my entire extended family. We do outdoorsy stuff. We’ll go up [the Palm Springs Aerial Tramway] and hike around. Or we’ll go to Joshua Tree. We are into rock climbing.
• READ NEXT: 56 Things to Do in Greater Palm Springs in January 2022.