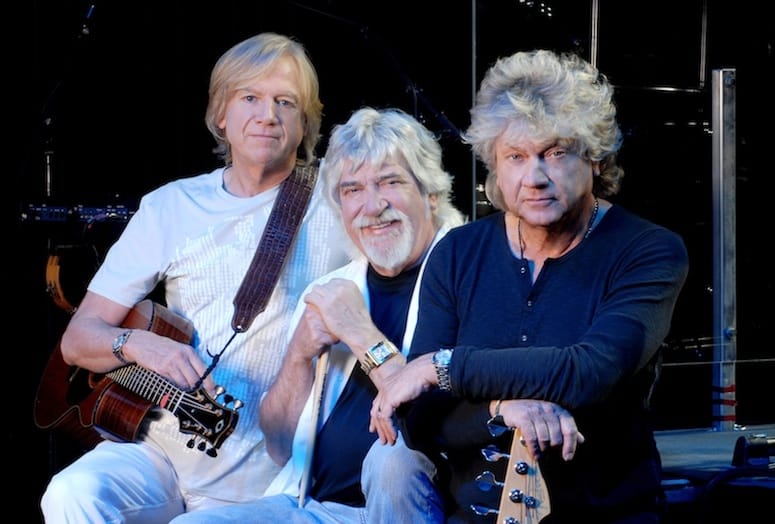 It may be hard to believe, but The Moody Blues are celebrating their 51st anniversary as a band this year.

Days of Future Passed, indeed. “Isn’t that great?” marvels bassist/vocalist John Lodge. “And we so love doing it in America.”

The Moodies (as they are also known to their fans) are commemorating such a storied occasion by hitting the road to share their ever-soaring, ever-majestic sound on the Timeless Flight Tour, named after the massive 17-disc career-spanning box set released in 2013. An eight-disc follow-up box dubbed The Polydor Years, released in 2014 and mainly culled from the bigger Timeless Flight collection, is both the subtitle and the focus of the current leg of the ongoing tour, which finds The Moodies taking the stage May 1 at The Show at Agua Caliente Casino Resort Spa in Rancho Mirage.

Lodge, who has penned such indelible Moodies classics as “Ride My See-Saw,” “I’m Just a Singer (in a Rock and Roll Band),” “Steppin’ in a Slide Zone,” “Isn’t Life Strange,” and “Gemini Dream,” is particularly pleased with the way the Timeless Flight box set turned out.

“It’s like how I heard the music in the studio, which is what I wanted,” he says. “I also love the book that’s in there, because it shows many photographs from across the years. I like the pictorial history of things. The music is all there, of course, but you can see that what we Moodies were going through personally is in the pictures. That’s really interesting to me.”

During a brief tour break to honor the release of his wondrous new solo album 10,000 Light Years Ago, Lodge also took time to discuss his love for Southern California, what he found while exploring the desert, and what fans can expect to see and hear when The Moody Blues perform at The Show.

What does California mean to you?
“Route 66! (chuckles) That’s a big part. I remember I couldn’t wait to get to California during our first tour of the States in 1968. I also remember calling my wife — we’d just gotten married — and I said, ‘I found where I want to live.’ (laughs heartily) It’s the most incredible, magic place ever.”

Did you have a visual sense of California based on what you’d seen in movies or on television?
“No real visual of it at all. Well, there was the Golden Gate Bridge, of course, but the rest of it, no; I had absolutely no idea what California was. You heard about ‘The Golden State,’ and all that. But say ‘Golden State’ in England, and you think that’s where the gold is! After going there, I realized all the hills look golden from the sun, and I thought, ‘Perhaps that’s what it’s about.’ ”

You’ve taken a few interesting drives down the coast over the years.
“I love driving, exploring, and taking photographs — lots of photographs. I decided to drive Route 66 — the old Route 66 — in 1978, which was brilliant. One time, Justin [Hayward, Moody Blues vocalist/guitarist and chief songwriter] and I rented a bright red Mustang Mach 1 — can you believe it? There was no interstate then, and we drove the coast road all the way down to Los Angeles. It took us a couple of days — total rock ’n’ roll! And then we stayed in Laurel Canyon, which was just amazing.”

You also have an affinity for Palm Springs.
“Yes! As the years went by, I realized the Palm Springs area was synonymous with Frank Sinatra, the Rat Pack, and all of that. A few years ago, when we’d do concerts in Palm Springs and then Las Vegas, I’d rent a car and drive across the desert. I’d go to Joshua Tree and the Four Corners. I love the desert, you see. I love it! I found a lake, and I took some photographs of it in the evening when the sun was shining on it; it looked so blue. Last time I was there, about two years ago, I went hiking in the hills, and I had a Cahuilla Indian guide come with me to explain it and talk to me. He showed me everything, including an amazing pyramid-shaped rock [in Martinez Canyon]. I’d like to go back there again and take some more photographs.”

A show that spans such a breadth of music like yours needs to have its peaks and valleys.
“Yeah, there has to be! It’s really important to do it that way. Obviously, we’ll be doing ‘Nights in White Satin.’ People probably expect any other artist to play their biggest hit last, but that’s not what we do.”

We’ll have to call that a spoiler alert, in case whoever’s reading this doesn’t know you do it that way!
(laughs) “I think you have to take an audience to a point where they think they can’t go any further, right, but then you give them something afterwards, to relieve them. They’re happy because they’ve heard ‘Nights,’ or whatever their favorite song is. And then they can relax and enjoy the rest of the show.”

Have things been introduced into the set because of The Polydor Years that you haven’t played much before?
“Yeah! There’s a song of mine called ‘Nervous’ [from Side 2 of 1981’s Long Distance Voyager] that I never even thought about playing onstage. And then Alan [Hewitt, the band’s touring keyboardist] asked me, ‘How about we play that one?’ A lot of people have asked me about it, but I thought it might be too complicated. But we began thinking, ‘Can we do it? Can it even be done?’ And then we found ourselves doing it, and now it’s in the set.”

I’m all for that. I like seeing how a set evolves, the more you get out on the road and adjust it.
“Me too! Things like that turn up. I’m really looking forward to playing that one for the Palm Springs audience, I have to tell you.”