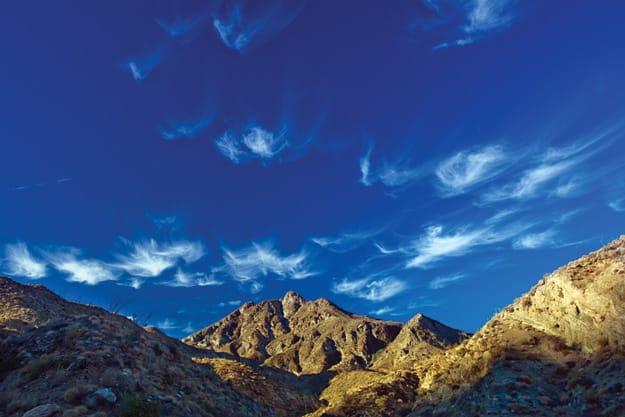 At the Martinez Canyon trailhead, five miles up a rough dirt road outside Thermal, amateur plant expert Buford Crites briefed photographer Tom Brewster, who was preparing for his latest mission in documenting the Santa Rosa & San Jacinto Mountains National Monument. Crites opened a field guide and pointed out a photo of branches that look like an elephant’s trunk: the legendary Elephant Tree.

Brewster would hunt for the rarely seen tree — once thought “lost to science” (some even said it was imaginary). But in 1939, a Coachella woman found two trees — the northernmost specimens ever recorded — on a slope above the Martinez creekbed.

You’ll know you found the Elephant by its intoxicating fragrance — like incense or orange peel, Crites said. Some botanists have reported the tree bleeds a substance like beet juice when scraped. Cahuilla Indian shamans gathered the sap, which is said to have magical powers.

Brewster and monument volunteer Keith Bartleson set off full of optimism. It was a glorious, still morning in this primal desert wilderness so hidden and yet close to major highways.

Only the most die-hard wilderness enthusiasts can point out Martinez Canyon. Its wide mouth is camouflaged by the agricultural lands near the once-famous, now-abandoned Valerie Jean date shop. Even if you find the winding route in, you probably won’t find the canyon itself without help.

Once, though, this was a major thoroughfare for Cahuilla Indians. From the main trail, you could veer right to the agave hunting grounds at Pinyon Flats or go left if you wanted to hunt bighorn sheep in Rockhouse Canyon. Or you could go forward to Santa Rosa peak. Indians fled up Martinez Canyon when ancient Lake Cahuilla rose and flooded the lower Coachella Valley. In the 1920s, the last of the local prospectors, Jack Miller, built a road up the canyon to his house made of cement and river rocks. In the 1990s, the Bureau of Land Management restored the house, which is now listed on the National Register of Historic Places.

In the 1976 floods that wiped out much of Palm Desert, Miller’s road was erased (though you can still find traces of it) and the canyon gained a measure of protective isolation. Today, the mouth of Martinez is an alluvial fan so wide it’s hard to spot the actual canyon. You have look for a pyramid-shaped rock and a smaller cairn to find your way.

Once inside (though it doesn’t yet feel like you’re in a canyon), you’ll encounter endless colonies of baby smoke trees and rock outcroppings sprouting pygmy cedar. Fat ocotillo and yucca dot the higher slopes. The plants love Martinez, as do plant enthusiasts like Crites, who has been camping here since the 1970s. The Friends of the Desert Mountains president loves simply saying the names of the Martinez plants: Dudleya, Bursera, Horsfordia.

Aside from the Elephant Tree, Martinez is full of mysteries that give desert canyons gravitas. In this story-rich national monument, a canyon without lost mines, ghosts, and booby traps simply doesn’t rank. Martinez and her intersecting canyons offer plenty: a lost emerald mine protected by a rock with a wolf’s head, lost skillets left behind by cookware collector and prospector Frying Pan Ebbens. At higher elevations, you can wander the Elfin Forest, a juniper-and-ribbonwood wonderland loved by Coachella Valley pioneer Nina Paul Shumway.

The first hint Brewster’s expedition fell short was a concise e-mail saying: “The Jack Miller cabin hike was the most brutal thing I’ve ever done.”

The broad, easy wash petered out and turned into an unmarked trail through a rocky streambed choked with cactus and cattails. “Every step was an uneven, ankle-twisting, knee-torquing, bone-jarring event,” Brewster says. After a 1930s hike up this same canyon, Shumway said the path disgusted even her burros.

The maze of side canyons led to constant dead ends and false turns. Too beat to clear a sleeping spot, Brewster decided to set up his tent in the cabin, even though Bartleson warned him about critters sharing his bed. A camper had thoughtfully left a broom behind, so Brewster cleared away the mouse droppings and laid down, aching everywhere. Sleep was not to be, though, because an unseen mouse scrabbled up and down the stove pipe all night. Lying in the dark for hours, Brewster had plenty of time to think about Crites’ story of the campers who took refuge in the cabin on the night of a big earthquake. As the rocks shifted, dozens of nesting rattlesnakes fled the cabin’s rock walls and stormed the sleeping quarters.

The next day, desperate to return to civilization, Brewster became separated from his hiking companion and lost the trail. He wound up overshooting the trailhead and had to call Bartleson by cell phone to find his van. He had pretty much had it with his “monument project.” Elephant Trees? “That became a nonissue for us,” he says. Beautiful scenery? He’d seen enough. He was going to retire to a dark sports bar to watch the Missouri game.

But blistered feet heal, and the worst nights in the wilderness are soon forgotten. The next month, Brewster would be out again, seeking unknown corners of the Santa Rosa & San Jacinto Mountains National Monument.