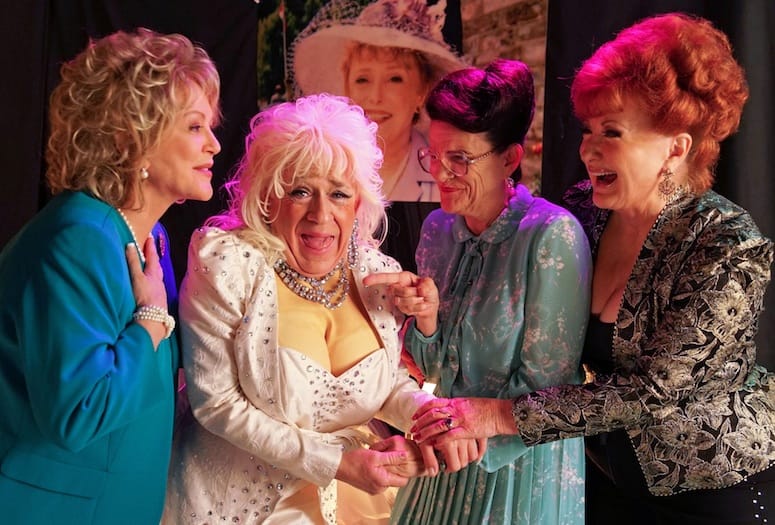 Leslie Jordan (second from left) as Brother Boy is surrounded by cast members from A Very Sordid Wedding, including (from left) Bonnie Bedelia, Dale Dickey, and Ann Walker.
PHOTOS BY STEVEN K. JOHNSON

And that’s the truth.

“I remember shooting the movie, my wig fell off and I put it back on backwards,” Jordan recalls recently to Palm Springs Life. “Del cut the action and I said, ‘Please, no. That’s hilarious.’ Now it’s one of the biggest laughs in the original movie.”

Jordan has resurrected the unabashedly gay character for Shores’ sequel, A Very Sordid Wedding, which makes its premiere March 10 at Camelot Theatres in Palm Springs. Jordan and Shores will be among the cast members who will participate in a Q&A before a sold-out audience after the screening. A second appearance by the cast March 11 has been added, but Jordan has said he will not be present for that one. The film will continue to show at the Camelot for two weeks.

Jordan realizes the sequel gives him an unusual opportunity to revisit a character that helped put him on the map. Sordid Lives hit screens in 2000. By the following year, Jordan was trading barbs with Megan Mullally as the irreverent Beverly Leslie on the hit comedy series Will and Grace, a role that earned him an Emmy in 2006.

PSL: What’s it like playing this character again on screen?

Leslie Jordan: “To be able to have been around for a character that was developed for you, written for you … We took it from a 99-seat theater as a play, to the movie screen, to all those episodes on Logo, a TV series, and now back to the big screen. That’s a pretty amazing journey.

PSL: Did you ever think there would be a sequel?

PSL: What is it about Brother Boy that you really connect with? 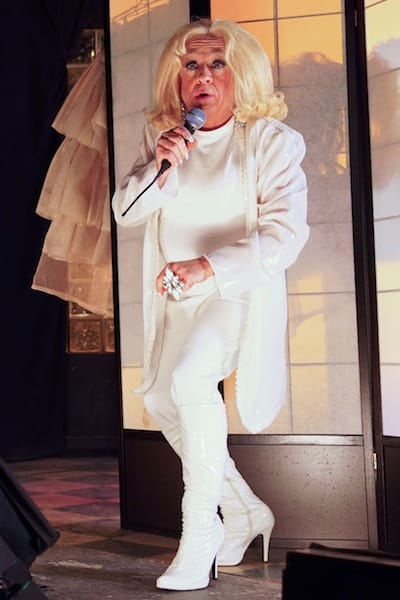 In the sequel, Brother Boy lives above a drag bar where he performs.

LJ: I think the tenacity. I know Del is writing for 10 characters and sometimes I’ll read a Brother Boy line, and I’ll think … We never fight, but I said, ‘Del, that’s too knowing. He doesn’t know that. You know what I mean? He’s been in a mental hospital, that’s his world and now he’s been above a drag bar (in the sequel). That’s his world, he doesn’t know.’ And Del said, ‘Well maybe he reads Tennessee Williams or he’s gotten to start. I said, ‘No! He doesn’t read Tennessee Williams. It’s too stupid.’ He’s not vapid because he’s real smart. But, he’s in the prison. He’s like a child to me. A little kosher 6-year-old that’s right in the present. But he wants to get out of that bar.

PSL: Does it seem appropriate to have the premiere in Palm Springs?

LJ: Rozene Supple, the owner of Camelot Theaters, is such a supporter of the arts, and such a doll. You know, put (Sordid Lives) up at the Camelot Theater, and that started it. We borrowed Olivia Newton-John’s tour bus and went out there to meet the mayor.

You know, the best compliment I’ve ever received as an actor came from that movie. I had a lady come up to me one night and unbeknownst to me, there was a club called The Gays and the Grays and they would go every Saturday at 3 o’clock and see the matinee of Sordid Lives. Then you got a lug nut, which is a line that Beth Grant’s character says. ‘They’re gonna reinforce that stool with a lug nut!’ And they got a lug nut. A lady came up to me, and this is the sweetest thing, she says, ‘I’m 83 years old and every time I get sad, I come see your movie. And I’ve got 23 lug nuts.’ She had 23 lug nuts! I just burst into tears and hugged her. I just thought, ‘You know what?’ … We just go and do as actors, and we forget the way in which things like this affect people. To be able to give the gift of being able to make people laugh, what a gift!