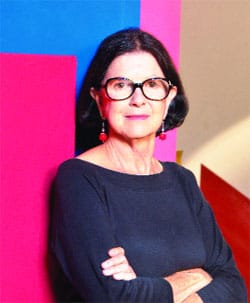 A bright yellow burst of optimism, M.H. Triptych I blossoms lyrically, enticing passersby at Florida Atlantic University to walk around and consider this abstract, painted-steel sculpture. The sun casts curious shadows off its geometric folds, and the 18-foot statement seems to encourage viewers to build a well-balanced foundation for themselves while reaching toward great heights. The experience becomes evermore absorbing from different vantage points. Keen observers appreciate the metaphor for the harmonious and meaningful coexistence of the natural and manufactured worlds.

M.H. Triptych I formed my first impression of Betty Gold, who had installed the piece a few months before I graduated from the university. Fifteen years later, long after moving to California, I began seeing her work at museums, in public spaces, and on college campuses. The artist and I finally met at the installation of Tirón VII at the Walter N. Marks Center for the Arts at College of the Desert in Palm Desert. Bright red and inspired by the crisp, angular folds of a bullfighter’s cape, the striking piece became the center’s iconic focal point and drew attention to her solo exhibition, Maquettes Made in Mallorca, consisting of the Tirón series she started in 1999 with a monumental installation for the city of Palma de Mallorca in Baleares, Spain. The U.S. Embassy in the Slovakian capital of Bratislava commissioned another large piece from the series, Tirón IV, for the garden of the presidential palace.

M.H. stands for “monumental holistic,” the largest of Gold’s series with more than 250 sculptures. The first piece, installed at the Oakland Museum in 1977, instigated her move to California from Aspen, Colo. She spent more than 12 years on the M.H. sculptures, which now reside in private, corporate, and public collections from Los Angeles to Seoul, South Korea.

A willowy former beauty pageant winner with jet-black hair and a native Texas twang, Gold hardly seems the type to cut, weld, and grind Cor-Ten steel. Yet she emerged a bona fide pioneer in a male-
dominated field and produced a gutsy body of work that spans more than 35 years.

However, her vision did not reveal itself in a New York minute. Rather, she studied elementary education at University of Texas, married, divorced, and remarried before returning to school to study art history, painting, and sculpture. She eventually apprenticed under Dallas sculptor Octavio Medellin.

The positive-negative relationships of brightly colored shapes had surfaced in Gold’s paintings and silk screens for years. “One color fit into the other color, and the shapes went into one another,” she explains. “And I thought, ‘I’m going to make sculptures like that.’ I remember seeing a painting in two sections sitting next to a chair in my studio, and it looked like a sculpture. That’s when I made my leap. That was the late 1960s.

“When I found geometry, it’s like when you find your essence,” she continues. “Working in a geometric form takes tremendous organization. This is how I live, and that’s how I express myself through my art.”

Gold’s sculptures have since broken physical boundaries, such as the contained patterns associated with Piet Mondrian, yet also encompass a minimalism akin to Ellsworth Kelly and the playfulness of Joan Miró. However, Gold mostly admires Pablo Picasso, Barbara Hepworth, and especially Alexander Calder, whose work “has humor,” she says. “It’s musical. It makes me feel joyous, like a glass of champagne.”

Her passion shines in the red, yellow, and blue glossy enamel that typically coats her own sculptures (she leaves some in a raw-steel state). A graceful simplicity also permeates her work: Gold splays two-dimensional sheets of steel and reassembles them in three-dimensional forms. They sometimes appear to be silhouettes.

Close examination, however, reveals a complexity that bespeaks the artist’s intense organization and exacting process.

“It’s exciting to just draw a rectangle,” Gold says. “It’s almost like having a blank canvas. You have to let go and make that first line across it. It has to be an organized line, because you know down the road this can be 15 feet tall.

“When I dissect a little piece of paper,” she continues, “I think how that fold, the first triangle, will look. It has to look back at me. The lines have to look balanced. When it looks good, I can’t wait to get it onto the cardboard.”
Gold then cuts the cardboard and ar-ranges the pieces into models for engineered steel structures. “I put [the models] on a lazy Susan and look at them from every possible angle,” she says. “I’m in total control.”

Her transcendent, albeit ferociously physical, experience begins when she cuts steel. “I have as much masculinity as femininity,” she says, noting that she enrolled in a trade school for welding and that her projects always passed stress tests. “I just fell in love with that process.”

The feminine dimension to Gold’s work has deeper roots: a doll that her mother gave her as a child. With no money to spend on outfits, Gold cut her own fabric and fashioned coats, dresses, and hats using a needle and thread. “To cut a piece a fabric is like cutting steel,” she says. “When you finish, you have something that fits just right.”

One of the most challenging fits was the 23-foot Redwood Moonrise–Fountain I, a commission for the atrium of the Ronald Reagan State Building in Los Angeles. After seeing the model, the client asked Gold to build her model as a fountain. “I had to think about it,” she says. “I had never done a fountain.”

One of only eight artists commissioned to create a work for the building, Gold seized the opportunity. Two years and seven tons of steel later, she had unquestionably taken her place among California’s most important contemporary sculptors.

As her career blossomed, Gold learned that her brightly colored, geometric sculptures were being recognized as the stuff of the obscure, contemporary MADI movement. In 1996, Oscar D’Amico, an artist in Albuquerque, N.M., saw Gold’s work in a magazine and contacted her for an appointment. “He walked into my studio and said, ‘You’re MADI!’” she says. “I didn’t know anything about the MADI movement. And being a Texan and a woman in the kind of sculpture I do, I try hard to stay independent.”

The acronym MADI remains a mystery. First articulated in 1946 by Uruguayan artist Carmelo Arden Quin, MADI could stand for four major art principles: movement, abstraction, dimension, and invention, or movimiento artistico de invencion. Some say it stands for MAterialismo DIalectismo. Others suggest Arden Quin might have taken the letters at random from his name. Still others say he invented the word, like the Dada art movement.
Gold was never concerned with these details; in fact, it was with ambivalence that she sent slides of her work to the MADI association in Milan, Italy. In 1997, the Reina Sofia museum in Madrid, Spain, held a 50-year retrospective on the movement, the critically acclaimed Arte MADI, consisting of 55 artists from 10 nations. Gold and D’Amico represented the United States.

“I was bowled over when I walked in opening night,” Gold says. “The complete mu-seum floor was geometric. It was a language that I understood. But it was spoken in a lot of dialects. It was a wonderful experience.”

However, dissonance among many of the artists was palpable at the exhibition. “Everybody thought they had the right idea [of MADI],” she says, dismissing it all as so much baloney. “But what they have done for me is open doors to other opportunities.” She has since shown with several MADI groups in Europe, as well as at the MADI Museum in Dallas, Texas (the only U.S. institution devoted to the movement). Reina Sofia acquired one of Gold’s sculptures for its permanent collection, and other commissions trace to her MADI alliances.

Meanwhile, Gold expanded the M.H. series and started others, typically named for the cities in which she formed the models — Sóller (Mallorca, Spain), Kaikoo (Honolulu, Hawaii), S.J.C. (San Juan Cosala, Mexico), S.M. (Santa Monica), and so on. Her newest series, Sant Elias IX, refers to the street where she lives part of the year in Mallorca, and the pieces are identifiable by their cathedral- or castle-like pinnacles.

Gold first visited Mallorca in 1999 to participate in a symposium. Commissions followed, and she fell in love with the town and its people. She purchased an atelier there in 2004.

As the Casal Solleric Museum in Palma de Mallorca mounted Gold’s 35-year retrospective exhibition, the 11-foot S.M. III-B (2005) was installed at the Vancouver Sculpture Biennale in British Columbia, Canada, and the seven white-painted steel M.A. (Mallorca) maquettes were being positioned for a solo show at Buschlen Mowatt Galleries in Palm Desert (the gallery will also show the six maquettes from Gold’s new Majestad series, which honors the king and queen of Spain). The large-scale M.A. IV (2005) belongs to the permanent collection at Palm Springs Art Museum, which now has three large pieces, including one on loan in the sculpture garden at California State University, San Bernadino’s Palm Desert campus.

The simplicity and sophistication of the geometry of these works remind me of M.H. Triptych I, that bright yellow installation at Florida Atlantic University. The M.H. series in general creates an expansive foundation for understanding and appreciating the innovations and inspirations that followed in Gold’s work. That triptych does more than stand the test of time: It represents the dynamic and compelling nature of Gold’s work — bright, thoughtful, and jutting with endless possibilities.