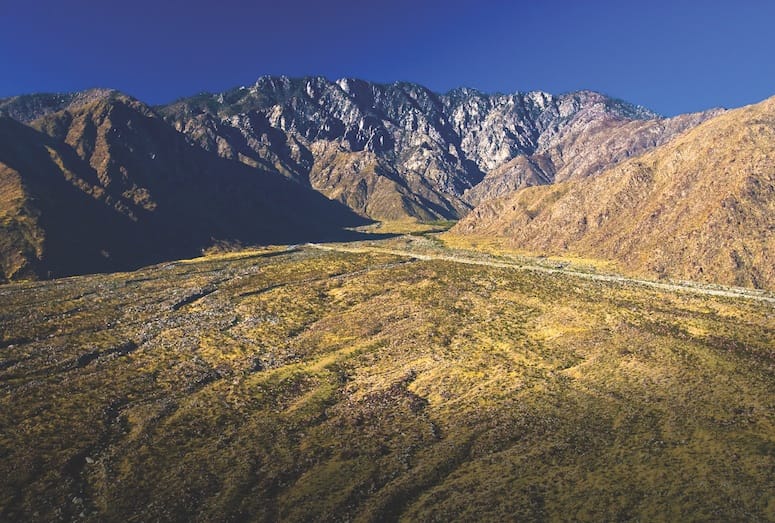 Chino Canyon, the home of the Palm Springs Aerial Tramway, has been at the center of environmental battles for more than 30 years. The prime location at the northwestern entrance to Palm Springs enticed developers, while conservationists fought to preserve the canyon’s natural state.
Photos by Tom Brewster

The Chino Canyon cone — the giant boulder field at the base of the Palm Springs Aerial Tramway — sits at the epicenter of three decades of noisy environmental fights. But now all that remains is the trill of an endangered bird — the least Bell’s vireo — floating over the peaceful area. Chino Canyon was not the only combat zone. Longtime locals used to awaken regularly to reports of lawsuits over proposed developments all over the Coachella Valley.

The peace in Chino is thanks to Friends of Palm Springs Mountains, a nonprofit that purchased parcels of open space (including 376 acres in August 2014) once slated for homes, a resort, and a golf course. Friends of Palm Springs Mountains previously acquired 209 acres, known as Angel Cove, farther down the cone along Highway 111, including the iconic monolith “Ship Rock.” valleywide are partly due to a downturn in major development since 2008, but the biggest credit goes to a peace treaty called the Coachella Valley Multiple Species Habitat Conservation Plan, adopted in 2008 (for brevity, we’ll refer to it as the habitat plan).

In response to protracted lawsuits over proposed development, a determined band of crusaders (led by the late Riverside County Supervisor Roy Wilson and Bill Havert, the first director of the Coachella Valley Mountains Conservancy) got together to craft a master plan that would streamline the process for developers, clarify where development could take place, and protect views and wildlife. It covered an area stretching from Cabazon to the Salton Sea and took 14 years to work out. The goal was to balance the needs of conservationists and developers in the valley for the subsequent 75 years.

Photo at right: Preservationists are focusing on Whitewater Canyon, which provides a vital corridor for wildlife to roam between the San Jacinto and San Bernardino mountains. This freedom to move from one habitat to another, particularly when food and water are scarce in one area, is critical to the animals’ survival.

This seems a lofty aim for a pile of paper, but remarkably the plan has achieved much of what it was supposed to.

“It took a lot of struggle to get here, but the end result is you’re going to have a livable valley,” says former Palm Desert Mayor Buford Crites. “We will not become the San Fernando Valley.”

Environmentalists have been using similar acts — known as habitat conservation plans — mostly around California, but also nationwide, in recent years. They are a response to the Endangered Species Act of 1973, a law that protected plants and animals but launched endless cumbersome lawsuits. “I lost count of the times we sued the city of Palm Springs over Shadowrock (the Chino Canyon development),” says Jeff Morgan, chair of the Palm Springs chapter of the Sierra Club and board member of Friends of Palm Springs Mountains.

The organizations that buy up open space locally — Friends of the Desert Mountains and the Coachella Valley Mountains Conservancy — now focus their efforts largely on parcels within the habitat plan boundaries. “The plans work; they’re helpful,” says Jim Karpiak, executive director of the Coachella Valley Mountains Conservancy. The former opponents are “maybe not enthusiastic, but satisfied.”

The victory in Chino Canyon gives a glimpse of what can happen elsewhere. A dramatic alluvial plain that would have been walled and gated is destined to be open to all. Instead of a private enclave, it will be known as the Chino Canyon Natural Preserve.

It’s also a victory for the Peninsular bighorn sheep, who use the canyon as a crosswalk. Now that Chino Canyon is safe, the group is planning appropriate low-impact public access, which may include trails, scenic viewpoints, and interpretative areas for the alluvial fan. The Chino Canyon cone marks a striking entrance to Palm Springs from Highway 111 and the gateway to the Palm Springs Aerial Tramway and the Santa Rosa and San Jacinto Mountains National Monument. The alluvial fan is a broad, fan-shaped slope created over thousands of years by the forces of mountain runoff sending huge boulders cascading down the face of the mountain.

The money to buy the land came from the Coachella Valley Mountains Conservancy, the California Wildlife Conservation Board, the U.S. Fish and Wildlife Service, and private lenders. This funding was available to help implement the habitat plan.

The organization is also working to conserve a remaining piece of land in lower Chino Canyon. The 300-acre section owned by a developer is across Highway 111 from the current Mountain Gate community. Next on the Friends’ agenda is tackling critical habitat in Snow Creek, a small bohemian colony nestled off the 111 northwest of Palm Springs.
Valley conservation groups continue to target land in so-called wildlife corridors — such as Whitewater and Stubbe Canyon — where animals roam between the San Jacinto and San Bernardino mountains, and from one habitat to another. When food or water is scarce in one place, the opportunity to roam is critical to survival. So instead of isolated patches, conservation groups look at the Coachella Valley map as a series of connections.

The organizations are also looking at “sand transport areas,” natural sand boxes that replenish the dunes of the Thousand Palms Oasis Preserve, home to the Coachella Valley round-tailed pocket squirrel, the Palm Springs pocket mouse, the Coachella Valley fringe-toed lizard, and other species. These sand sources, located near Edom Hill and Desert Hot Springs, are washed down in streams. “It’s the canyons and the riverbeds and creek beds we’re looking at,” Karpiak says.

As the wild lands near Palm Springs become more secure due to the habitat plan, look for new skirmishes in the East Valley and out toward the Salton Sea, areas targeted for energy development and major residential projects. Of particular note to Sierra Club leader Morgan is La Entrada, a proposed development that will double the size of Coachella, with 7,000 to 8,000 new homes lapping at the foothills of the Chuckwalla Mountains and the Mecca Hills.

The Mecca Hills area is a wildlife corridor and desert tortoise linkage (turtle crossing), where animals cross from the Salton Sea to Joshua Tree National Park. Because the Entrada site, south of Interstate 10, is mostly flat and agricultural, “it sort of slipped under the radar when the habitat plan was worked out,” Morgan says.

The development’s final environmental impact report, released Nov. 1, 2013, says, “Project construction and implementation would not interfere substantially with the movement of any native resident or migratory fish or wildlife species or with established native resident or migratory wildlife corridors, or impede the use of native wildlife nursery sites.” It notes that while the development is located “in proximity to three [Coachella Valley Multiple Species Habitat Conservation Plan] Conservation Areas” and is within the planning boundary of the habitat plan, “implementation of the project as designed would not interfere with or disturb these conservation areas,” and “would not conflict with the provisions of an adopted Habitat Conservation Plan, Natural Community Conservation Plan, or other approved local, regional, or state habitat conservation plan.”

Not far from the planned community of La Entrada, the Friends of the Desert Mountains (a separate entity from the Friends of Palm Springs Mountains) and Coachella Valley Mountains Conservancy are focusing efforts on preserving the ancient Lake Cahuilla shoreline. A lake half the size of Lake Erie once dominated the landscape of Southern California. The remaining shoreline is dotted with fish traps, camps, trails, rock rings, and rock art. It’s a blockbuster cultural resource, with no equal in the United States.
In one piece of the puzzle, the Friends of the Desert Mountains recently purchased 321 acres of land east of the Salton Sea. Animals travel the dry wash habitat corridor to reach the bountiful water, shade, and provisions of Dos Palmas Preserve near Coachella. The habitat provides food and shelter for 16 endangered or protected species, and includes — a bonus — portions of the ancient beachline.

How does this good news and cooperation sit with ’60s-style environmental activists who fought so long to preserve our desert mountains and dunes? Sierra Club leader Morgan agrees the habitat plan is an improvement over the old days, but adds that not all areas that should have been included were penciled in. The plan covers lands from Cabazon to the Riverside county line — and protects vistas and cultural resources (artifacts) as well as habitat. But there was a lot of bargaining to make the whole thing work. Some sections were simply left out. Areas such as the gateway areas of Palm Springs, north of Tramway Road, remain vulnerable to development.

So the environmental advocates and activists don’t need to retire just yet. “There’s plenty of work to be done,” Crites says. “There’ll be work to be done forever.”

How to Get Involved

Friends of Palm Springs Mountains is looking for the final funds to preserve Chino Canyon. Tax-deductible contributions will help create a permanent legacy at the entryway to Palm Springs and the Coachella Valley from the west. Visit www.friendsofpalmspringsmountains.org for more information about the organization or to donate.