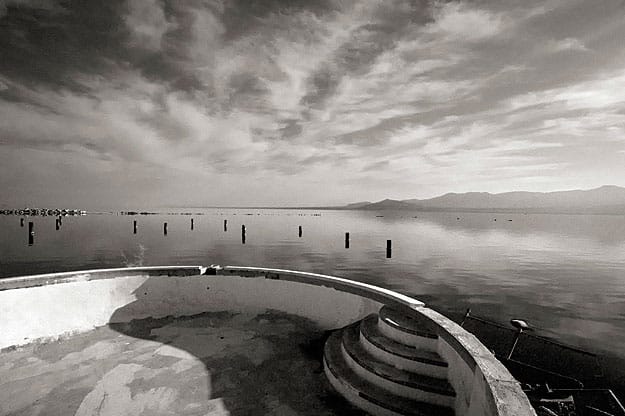 You drive in from Interstate 10 or Palm Springs, turn south at Mecca, and pass fields of peppers and the old artists’ colony called Desert Camp. When you see the first glint of blue in the distance, your spirits likely will lift. A giant lake in the desert is a miracle in light, space, and water. Enjoy that first glance at the Salton Sea.

What you see and feel next will vary. If you were raised on Sierra Club calendars and Ansel Adams panoramas, you might focus on the crumpled Mecca Hills and the big vistas of the Santa Rosa Mountains across the sea. If you grew up with Love Canal and Chernobyl, you might zero in on abandoned trailers, dying palms, and fish bones.

For decades, artists have come to the sea to put their stamp on its waters. In April, the Salton Sea History Museum in the restored North Shore Yacht Club opened its inaugural exhibition, Valley of the Ancient Lake: Works Inspired by the Salton Sea.

Curated by Deborah Martin (with historical works and memorabilia provided by Jennie Kelly), the exhibition features 10 artists who focus their work on the sea. To contextualize their paintings, drawings, and photographs, it’s helpful to know they follow the path of several generations of artists.

The first artists influenced by the sea lived around its shore and made art from the land itself. Indians carved petroglyphs in the boulders and scratched pictures in the tufa of the ancient shoreline. Native American potters made ollas from the milky-white clay cradling Agua Grande (an Indian name for the sea).

Next, expedition artists accompanied railroad surveys. In 1853, artist Charles Koppel came through with geologist William Blake and made etchings of Travertine Point and the ancient shoreline across the sea from the yacht club. For a while, the inland lake was called Blake’s Sea.

After the expedition artists, California Impressionist painters brought the style of capturing light that spread from France to the U.S. East Coast and finally to California and the desert in the early 1900s. There were no sunken trailers then, but still the desert was foreign to artists from greener places. Some saw bleakness and desolation. Others — such as Fred Grayson Sayre — saw paradise. Art collector Allan Seymour was so inspired by Sayre’s vision of “the Turquoise Sea” that he bought a home at North Shore.

As Impressionism faded, a lively and little-known era in Salton Sea art began. In 1940, one of the great Western artists, Maynard Dixon, lived in a shack along the Southern Pacific Railroad tracks near North Shore. He made a sketch for his painting Destination Unknown with fellow artist John Hilton posing as a hobo. Painters Jimmy Swinnerton and Clyde Forsythe visited him at the shack he called Desert Camp, as did Indian Wells artist Carl Bray and Desert Magazine Editor Randall Henderson.

By the time Ainsworth died in 1968, the open landscape had given way to tract housing and freeways. Flooding from storms damaged the yacht club jetty and submerged buildings along the shoreline. Agricultural runoff polluted the sea and repelled tourists. The increasing salinity of the water gummed up boats’ engines, and water-skiers decamped for the Colorado River. The yacht club became an emblem of decay. For a growing number of Americans, their only exposure to the Salton Sea came from Goth fashion photos taken at the pigeon-infested, graffiti-scarred, busted-up yacht club.

As the land changed, a new wave of artists tackled the degradation head-on. In the 1970s, the New Topographics photographers declared “an end to romantic nature.” Photographers Robert Adams, Lewis Balz, and others influenced young artists and photographers nationwide to turn toward the man-mauled, nonidealized landscape.

Valley of the Ancient Lake showcases the traditional, apocalyptic, and everything in between. Martin, a realist painter, places ruined buildings within luminous landscapes, while Eric Merrell works his canvases in the Early California tradition.

Beautifully tragic photographs by Christopher Landis, Kim Stringfellow, and Bill Leigh Brewer long to save the sea, while interventionist Cristopher Cichocki says his images of DayGlo-painted dead fish help bring forth “a new awareness of man and nature in conflict.”

Seymour found plein air artist Andrew Dickson painting one day on a ridge near his North Shore home and invited him to dinner. That’s how glad he was to see a traditional landscape painter at the Salton Sea. (Dickson has been coming to North Shore to visit his grandparents since age 7; his grandmother still lives there.)

Some art critics have foretold the dawning of a New Sublime, a return to the pastoral vision of America’s early landscape painters but with a contemporary edge we haven’t even thought of yet.

It comes back to that longing for the sea. If their longing is pure and sustained, the artists you see in this exhibition might be the ones to accomplish what politicians and environmentalists have so far been unable to achieve: to dream back Blake’s Sea, dream back Agua Grande.