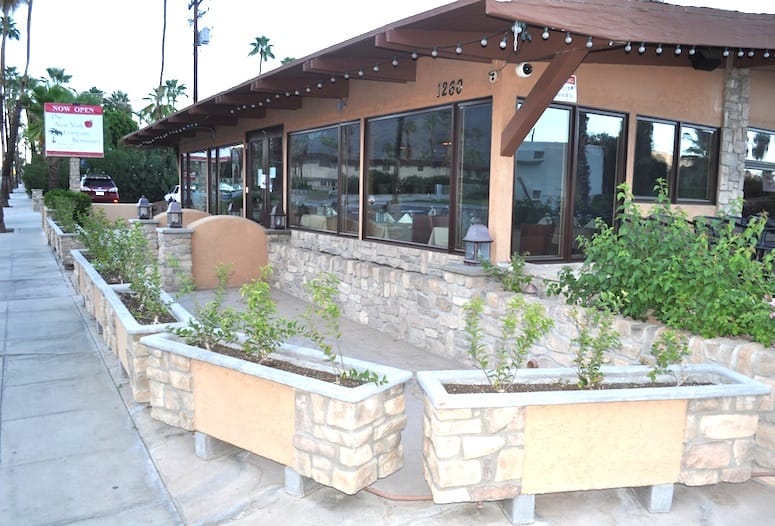 My family visited Palm Springs frequently when I was growing up.

For me, the highlight of every trip was dinner at Banducci’s Bit of Italy located on the corner of South Palm Canyon and Morongo. In retrospect, I can’t describe exactly why I loved this classic Italian place so much, other than to say it just always felt like I was visiting an old friend. (Banducci’s was also a favorite hangout of Frank Sinatra and Dean Martin.)

So it was with some trepidation that I swung open the door to The New York Company Restaurant, the newest inhabitant of the Banducci space. My fears were immediately allayed as I entered a warm and inviting room filled with people who were having a great time — kind of like they had been coming here for years.

“It was a wonderful weekend for our opening,” says owner Neil Castren. (The restaurant’s first night was Sept. 20.) “We had many friends from Los Angeles come down.”

“We feel we’ve put an exciting menu together,” he says. “We’ll have a bar menu shortly and we’re looking forward to using our pizza oven, which will be a new experience for me. Wally D'Agostino, my partner, said we had to have New York pizza and he wanted some good Italian dishes on the menu as well. I'm more traditional in taste and our chef, Alen Badzack, makes the difference with his wonderful sauces.”

With that in mind, my three dining companions and I each delved into different sections of New York’s diverse, wide-ranging menu.

It’s hard to go wrong with any dish that has the words “mac and cheese” attached to it, and the restaurant’s Lobster Mac & Cheese with braised leeks, bacon, a creamy Gruyere cheese sauce and penne pasta was no exception.

And while it’s often difficult to find a thick pork chop that is prepared just right, my friend thought his marinated, grilled pork chop in a rosemary mushroom demi-glace was cooked to perfection.

We rounded out our brief tour of the menu with an oven-cooked blackened branzino (aka sea bass) — prepared with fresh rosemary, lemon, sea salt, and olive oil — and chicken scallopini sautéed with mushrooms, capers, and garlic served in a white wine sauce over linguine.

Prior to opening, the dining room and bar were remodeled.

“My restaurant in Los Angeles had a 1950s look, and I wanted to reintroduce a semiformal feel to this restaurant where locals could still feel comfortable,” says Castren.

The restaurant’s tagline is “Where East Meets the West” and Castren explains that, “The decor for the most part has a New York theme with large photos hung on a black wall in the bar area, while the dining area is more formal with cranberry-colored walls and California-themed pictures. East meets West is carried through by having New York in the bar and a California theme in the dining area.”

Aside from the low brick and pillar wall dividing the main dining room into two sections, and the windows fronting South Palm Canyon, there wasn’t much about the space that reminded me of Banducci’s.

Nonetheless, I felt like I had made a new friend.