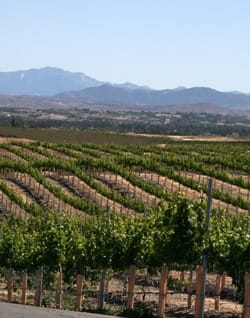 Every Tuesday from mid-April until the end of October, tour groups from France visit Bella Vista Winery in Temecula, where owner Imre Cziraki claims the viognier is better than French viogniers. After tasting it, says son Emery, “a couple of guys [in the French tour group] that were real wine connoisseurs looked at my dad funny, and they both said, ‘We agree your viognier is better than ours.’”

A baby in the world of varietals that have been around for hundreds of years (the first record of chardonnay dates to 1330), viognier (vee-ohn-yay) traces its early history to the mid-1960s in the Northern Rhone district of Condrieu. According to Mat Garretson, founder of The Viognier Guild (which evolved into Hospice du Rhone to encompass other Rhone varietals), viognier almost became extinct. “In 1970, there were less than 50 acres on the entire planet,” he says. Fortunately, viognier spread to Australia with the first commercial planting there in 1978 and to California’s Napa Valley with the first commercial planting in 1981. “In California today,” Garretson says, “there are over 3,000 acres.”

The French-born varietal could very well be the new darling of the white wine world, if Temecula Valley vintners have anything to say about it. Twenty of the area’s 31 wineries produce viognier.

Winemaker Gus Vizgirda of La Cereza Winery is so gung-ho on the grape that he says, “We sell out, and why do a chardonnay when you can do a viognier?” Sales of “the other white wine” have steadily climbed at La Cereza, which grows close to six acres of viognier grapes. “I think people are tired of chardonnay,” says Assistant Winemaker Jim Swelgin.

Don Reha, the mastermind behind the wines of Thornton Winery (which has produced viognier since 1993), says there’s about 25 times the amount of viognier grapes planted now than 10 years ago. The Department of Food and Agriculture reported 183 acres of viognier grapes in 1998 and 2,217 acres in 2004. And, Reha says, the trend has continued over the last few years.

Of course, something had to give way to make room for the blossoming varietal. Reha suspects chardonnay became the main victim. However, he adds, “Has it really hurt it any? Probably not, because overall wine consumption has grown.”

Reha attributes viognier’s growing popularity with education about the grape and that education in part to Garretson, whom Wine Spectator once dubbed “Mr. Viognier.”

As a wine retailer in the early 1980s, Garretson’s mantra was “white wine is what you drink when you run out of red wine.” In 1982, he received a bottle of Condrieu viognier for his birthday. “I said, ‘Well, gee, thanks’ and then put it away, not thinking I would even open it,” he recalls. “A few months later, I was cooking and the recipe called for a cup of dry white wine.” Remembering the bottle of viognier, he removed the cork and poured it into a measuring cup. “I smelled it and said, ‘Oh my gosh, what the heck is that?’ It became my one-bottle epiphany. It changed my mind about white wine — and even wine in general. I hadn’t tasted anything so engaging and alluring and exotic.”

Garretson became so impassioned about the wine that he took the empty bottle to Condrieu to find the winemaker and learn “what it was all about.” Now the owner of Garretson Wine Co. in Paso Robles, he has been making viognier since 1993 and continues annual sojourns to Condrieu. His winemaking philosophy is clearly stated on his Web site: “No cab. No chard. No merlot. No crybabies.”

“The thing about viognier is it has a lightness that chardonnay does not have,” Vizgirda says. That “sense of discovery” among wine lovers has propelled the popularity of viognier, he notes.

“Look for aroma,” Swelgin advises. “You will pick up the aroma of some pear, a little bit of grapefruit, and even sometimes a bit of honeysuckle. It’s fruitier without being a sweet wine.”

“Reha similarly describes the viognier profile as having “a perfumy-like quality, white flesh fruit such as pear, apple, delicate melon, a hint of cucumber, really rich on the palate with a lot of honeysuckle.”

Imre Cziraki says Temecula Valley’s viognier is fruitier and crisper than that produced in France primarily because of the area’s longer growing season.

“They have to harvest by the end of August because of the rainy season,” he says. “We have 320 days of sunshine over here. The only thing we don’t have is the rain, and we can substitute with irrigation. So when we pick our grapes, we can pick them with the right brix [sugar content]. … They don’t have the same full ripeness of the grape.

“We have all the luxuries here of California.”