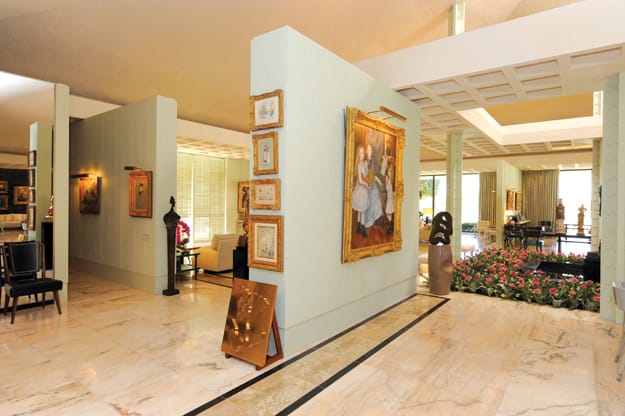 Like many of the canvases in the Annenberg collection, Seated Peasant, an image Cézanne returned to time and again over four years in the 1890s to rework as he entered his most important phase, illustrates the collectors’ uncanny eye at acquiring the established works of an era, as well as the formative ones that shed light on artists’ processes and psyches more than major titles.

This particular acumen drew four major museums together for one year in 1990 in a game of one-upmanship, with the prize being 19th century Impressionist and 20th century post-Impressionist masterpieces. Twenty years ago last March, one of the art world’s most frenzied competitions came to a climactic end when Walter Annenberg announced he was bequeathing his more than $1 billion collection to the Metropolitan Museum of Art in New York.

The Annenbergs made some of their most ambitious acquisitions in the 1980s. At one point, he and his wife, Leonore, considered keeping the paintings at Sunnylands (their Rancho Mirage estate) or, briefly, auctioning them, but ultimately decided a larger institution would better suit the public.

The Met; Philadelphia Museum of Art; National Gallery of Art in Washington, D.C.; and Los Angeles County Museum of Art vied for the prize with intensity, although everyone remained coolly aloof on the surface. There was never a formal acknowledgement the paintings were available, but everybody knew the game was on.

What was at stake — it was unofficially dubbed the “Annenberg Stakes” — was arguably 52 of the most important European artworks and the single largest gift in a half-century to any museum. The Renoirs, Degases, Monets, and van Goghs that had hung at Sunnylands since the mid-1970s formed the foundation of the Annenbergs’ vast collection. Today, digital reproductions of all the paintings adorn the same places the Annenbergs hung the originals.

“There are certainly larger private collections,” says Richard Rand, senior curator at the Sterling and Francine Clark Art Institute in Williamstown, Mass., a museum founded on another great American collection of Impressionism. “But the Annenbergs have a certain number of signature pieces and other offbeat works that explain an artist really well. [The collection’s] mix is its strength.”

The collection did receive a little criticism. Some said, “It was too soft, not tough enough,” Rand recalls. By “soft,” critics meant the collection didn’t have enough of an edge and was missing some of the seminal images transitioning from Impressionism to post-Impressionism, establishing the ever-important bridge between the 19th century and modernism. But by the time the gift was made, the Annenbergs by chance had rectified such matters — at a price — with the purchase of two paintings.

In 1987, the Annenbergs spent $40.7 million at a Sotheby’s auction for Picasso’s 1905 At the Lapin Agile (Harlequin With a Glass) — a racy, jaundiced view of Parisian nightlife with his early Cubist leanings. At about the same time, they splurged on Braque’s pioneering 1939 The Studio. “Those really made a great collection monumental,” Rand says.

Their additions bolstered such paintings as Monet’s Camille Monet on a Garden Bench, a rousing plein-air rendering showcasing the artist’s early affinity with light and gardens; Wheat Field with Cypresses by van Gogh, the close relative of his famous The Starry Night; and Renoir’s sensuous Reclining Nude, an obsession during his peripatetic existence in the early 1880s. And there are still-life paintings from the obscure Henri Fantin-Latour, whom many Impressionists credited as an early inspiration.

Of course, the Annenbergs didn’t always get what they wanted. They were reportedly outbid by an offer of $53.9 million by the J. Paul Getty Museum for van Gogh’s Irises in 1987, to which Annenberg commented in a 1991 interview, “I like my Irises better,” referring to his painting by Monet, The Path through the Irises. The Annenbergs certainly achieved what they set out to do: build a reputable collection that personally appealed to them to be showcased at their winter home.

All the museum suitors, in varying degrees, were vaguely aware the Annenbergs might donate their artworks, but it became a reality in 1990 when all four participated in a very public dog-and-pony show to ostensibly determine which one would obtain the collection. That year, the collection went on a cross-country tour. The museums staged exhibitions one after another, spending big money on marketing to attract crowds — a key element in the final decision, but not the only one. After all, these paintings were the Annenbergs’ “children,” nurtured from infancy with the same attention that created their wealth.

The couple, which gave away hundreds of millions to numerous charitable foundations, believed the collection was their most significant gift to the public. And for people who collected prestigious Chinese porcelain, Meissen jars, and Steuben glass, among other objects, the pictures were their most cherished possessions. “This is my family. I adore these things,” Walter once said.

A number of points were crucial to the final decision, including the success of each exhibit, the galleries’ attendance figures and how the pieces fit in their individual environments, a stipulation that the works in the collection never be separated, and personal considerations, as well, because each institution represented a part of the Annenbergs’ life. Philadelphia was where Walter grew up and founded his business. New York is a financial capital representing their immense fortune. Southern California was the adopted region where they chose to build Sunnylands, the center of their social life and a place where they entertained seven presidents. Washington, D.C., was the center of their political clout, reflected in Walter’s appointment as ambassador to Great Britain in 1969.

Additionally, the Annenbergs had strong ties with three of the institutions. He was a longtime trustee of the Met and a founding member of the Patron’s Fund at the National Gallery; she was a board member of the Philadelphia Museum of Art. They had given millions to each, although a 1977 falling out at the Met clouded that institution’s prospects. Others saw the Met always as the frontrunner. The dark horse was Los Angeles County Museum of Art.

“We knew we were the long shot,” says Rand, who was curator at the time. “But we put together a proposal that accentuated what the addition would do to the cultural scene in California and that it was close to Sunnylands. Our weakness in our collection was exactly the strength of the Annenberg collection.”

Philadelphia Museum of Art relied on its location as the couple’s first home and where the collection was cataloged (even today, it conducts primary research on the paintings). The National Gallery presented itself as part of a group of museums — a place with huge attendance numbers and patriotic verve. The Met, on the other hand, went all out with a museum-within-a-museum model, a half-hour movie, and mocked-up special exhibitions that would continue for years.

“We didn’t know until we got the call,” says Gary Tinterow, the Met’s curator of 19th century European art, who was involved with the acquisition. “It coincided with us looking to renovate the galleries, so we had plans already in process. It wasn’t a given. It was hard to tell; the ambassador kept things close. He was hard to read.”

These days, the collection anchors the Met’s 19th century European collection. Shortly after the announcement, the Met set to work on a multimillion-dollar reconstruction of its galleries. Given that they couldn’t be separated, the Annenbergs’ paintings maintain cohesiveness; yet the new gallery’s design encourages conversations between the museum’s established collection and the newcomers.

To see The Card Players next to Seated Peasant, as they were in an exhibition earlier this year, is to witness siblings reunited and history completed. Seated Peasant was an outgrowth of The Card Players, pushing Cézanne further toward Cubism. Historians now see the two as essentially one in the same series, though Seated Peasant is increasingly viewed as more important. Yet another offspring still calls Sunnylands home: Each work was painstakingly reproduced digitally to hang exactly where they and their guests viewed the originals.

The cost and effort to create the facsimiles illustrates how emotionally attached the Annenbergs were to the paintings and how they were an integral part of Sunnylands. They were only a small portion of what the couple acquired over the years, yet they are the primary expression of their rather visceral response to collecting based on what they liked, not value. Although inconclusive, research indicates the couple never used consultants to a large extent, if at all.

“They didn’t buy trophies,” says Anne Rowe, director of collections and exhibitions at Sunnylands. “They really saw something that they responded to aesthetically and sought it out.” Among all of the prized artworks at Sunnylands, Walter Annenberg once hung a mere poster of van Gogh’s Sunflowers in his office, writing later that even if he couldn’t have the real thing, he still wanted to be close to it.