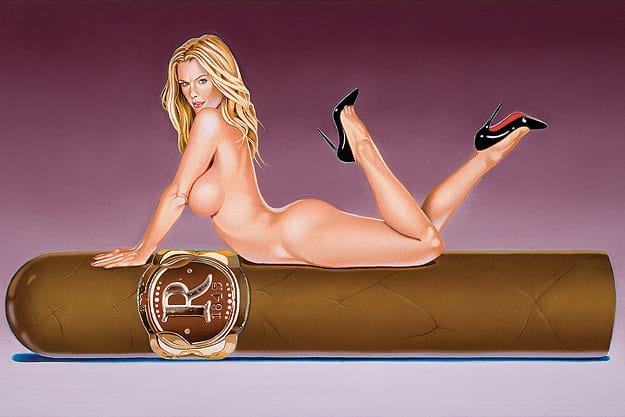 Curvaceous, idealized nude women rise from popular candy wrappers — Mounds, Junior Mints, Snickers — or from a velvety Crown Royal sack, the skin of a Chiquita banana, a can of Planters Mixed Nuts, or a glass of Coca-Cola.

The models pose, smile … you get the idea.

Just don’t call the painter of these images a pin-up artist.

“I hate that label,” says artist Mel Ramos, who, for the record, also dislikes the Pop label. “I’m a figurative painter. Figure painting is what I do. That’s how I started out as a young kid. One day I put a costume on [a figure], and then my work became associated with Pop art. But that [movement] was a bunch of artists who were doing similar things and then went off in their own directions.”

Ramos, whose star rose with his early-1960s paintings of comic-book superheroes and later for those fictive nudes, has built a robust following in the Palm Springs area. This month, Imago Galleries is showing a selection of the artist’s work in Palm Desert, as well as at Palm Springs Fine Art Fair (Feb. 14-18), which will honor Ramos with its lifetime achievement award and exhibit a career survey of his paintings and drawings.

“My paintings deal with figures and products, which was the great theme of American advertising when I grew up,” says Ramos, 77, who splits his time between Oakland and Horta de Ebro, Spain.

“I was fascinated by the way they used sexy girls to sell stuff. I chose the

because of their design quality. The brands that I use are glamorous in a certain way. Like Coca-Cola — you don’t even have to read it to know what it is. It’s a beautiful lettering font. I have no problem with stealing other people’s ideas.”

Ramos not only steals them; he also painstakingly recreates the typography. “I want it to look like it was untouched by human hands,” he says.

The works shown in the art fair’s career survey will span the early superheroes and Peek-a-boo keyhole paintings to his recent, meticulous drawings that combine black-and-white and color.

“I used to do drawings as preliminary sketches,” Ramos says. “Then I got into computers to make work more efficiently. So I stopped drawing. I really loved to draw. My heroes were Velazquez, Matisse, and Picasso. I want to be as good as them. So I decided I wanted to continue drawing — doing drawings of my paintings.”

Ultimately, “I want my work to be fun and humorous. If you don’t have a sense of humor, you’re probably not going to like my work.”

If you do, you’ll be rewarded with paintings as bright, fun, and colorful as they are masterfully executed. Galen and her late husband, Lou, built a collection of post-World War II and contemporary art, which she opened to the art fair’s VIPs last year.

The opening-night preview unfolds from 6 to 9 p.m. at Palm Springs Convention Center.