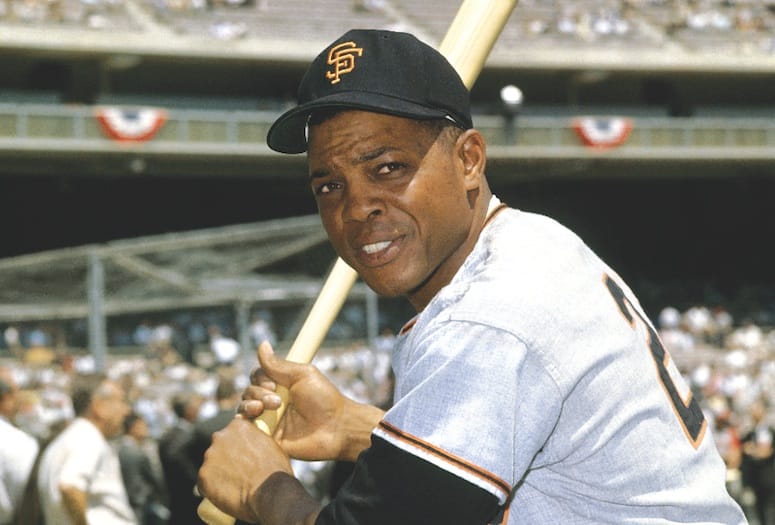 Six decades after "The Catch," the world's greatest living ball player still has a sweet spot, only this time it's not in his golden baseball glove – it's for children and the Coachella Valley.

“The Say Hey Kid,” as Willie Mays was nicknamed in his illustrious athletic career, headlines the Champion Honors Luncheon at the Hyatt Regency Indian Wells Resort & Spa on Jan. 14. The event benefits the Barbara Sinatra Center for Abused Children.

As part of the event, Mays will conduct a rare and intimate conversation dubbed “Say Hey, Willie.” The center will also honor Mays for his “great contributions to sports, his dedication to children, and the deep connections he has made in the Coachella Valley through his support of charity pro-ams over the years,” says the center’s executive officer, John Thoresen. Philanthropist Gary Hall, head of the Wells Fargo Bank Foundation, is also an honoree. More than 700 supporters attended last year’s event, which raised more than $200,000 to help local children. Willie Mays and Joe DiMaggio, a pair of Hall of Famers.

Willie Howard Mays Jr. first got Palm Springs sand in his cleats in the 1960s. At that time, he was a regular at San Francisco Giants spring training and exhibition games at Palm Springs Stadium, known then as Angels Stadium.

“I liked Palm Springs because it was quiet,” Mays remembers. “I always felt I could retire here.” He became one of the first sports celebrities to buy a home in Palm Springs and still owns the desert abode he purchased from Lon Simmons, the longtime team broadcaster known as the “Voice of the Giants.”

For more than four decades, Mays has conquered local golf courses with other celebrities — he was a 4 handicap for many years — and fondly recalls hitting the greens with Joe DiMaggio, whom he calls “the player I watched as a kid,” and Johnny Bench. “I still see Johnny all the time,” he says. Other fellow golfers include pro-am pals Fred “The Hammer” Williamson, Jim Brown, and the late “Voice of the Mets” Ralph Kiner, who attended the 2014 Champion Honors event. Introduced to Frank Sinatra by future Hall of Famer Leo Durocher in the 1950s, Mays became friends with Frank and the rest of the Rat Pack. Mays met Bob Hope in the Bay Area and was invited to play in the Bob Hope Chrysler Classic throughout the 1980s, teeing up with Doug Sanders, Chi Chi Rodriguez, Jack Nicklaus, and Arnold Palmer.

Dinah Shore invited Mays to play in her first two LPGA events, and later brought him along to play with Nancy Lopez. “We had more fun with the lady golfers,” Mays recalls. Vern Alden, a Colgate executive, befriended Mays, connected him to other events, and helped him get work after Mays retired from active play with the New York Mets.

“I played in the Sinatra tournament for years with Dean and Sammy — all the guys,” Mays recalls. “What fun! Sometimes, in the Sinatra, I would pay my dues out of respect, even if I wasn’t playing. Frank always took care of me, too. I’m glad I can come down to help out Barbara with the center.”

“It is hard to build an institution,” Mays says. “Barbara was way ahead of her time on such a sensitive need and was blessed to have a husband who could raise lots of money.”

The Roots of Success

For anyone who needs a refresher on Mays’ greatness, The Catch came in the 2-2 eighth inning of Game 1 of the 1954 World Series at the old New York Polo Grounds.

Mays, the 23-year-old New York Giants center fielder, chased a 460-foot line drive by the Cleveland Indians’ Vic Wertz from shallow center all the way to the back wall, snagging it in a superhuman, over-the-shoulder basket grab. He then spun around, hurling the ball to the infield to prevent the base runners from scoring, completing what may be the most famous defensive play in baseball history. The Catch fired up the lagging Giants to defeat the Cleveland Indians in an extra inning and go on to win the Series.

His mastery of every facet of the game — which earned him a spot in the Baseball Hall of Fame in 1979 — supercharged his career with the New York Giants (1951–1957) and San Francisco Giants (1958–1972). His stunning stats include 3,283 hits, 660 home runs, 12 Gold Gloves, and appearances in a record two dozen All-Star Games. Baseball player and manager Ted Williams famously said, “They invented the All-Star Game for Willie Mays.” But growing up during the Great Depression in Fairfield, Alabama, Mays, now 83, saw hardship that sensitized him to the need for children to live in nurturing environments, and helped forge his lifelong passion for helping those in need.

He credits his phenomenal success to his father, Willie “Cat” Mays Sr., and baseball — both of which allowed him better opportunities than those offered to many of his fellow African-American children in the steel town near Birmingham where he grew up. While workplaces were integrated during Mays’ childhood years, residential sections were still segregated. (To learn more about Mays’ background and the socioeconomic conditions of his youth, check out his authorized biography, Willie Mays: The Life, The Legend by James S. Hirsch.)

Cat Mays was an optimist, an avid baseball player, and an astute coach who taught his little boy to play every position. Mays Sr. had more spending money than other Fairfield fathers thanks to his job at the U.S. Steel mill and the ballpark admissions he shared with fellow Industrial League teammates from playing night and weekend games.

He also gave his son a sense of fun and humor. Mays remembers being in the stands when his father told him he could perform magic by making hundreds of people stand up and sit down at will. Impressing his son with his prowess, Cat didn’t explain the seventh-inning stretch wasn’t magic at all until young Willie finally caught on. The joke became a fond memory for both of them.

Even as a child, Mays was so athletic and well coached that street teams all over town — regardless of ethnicity — vied for his talents. When the sheriff showed up to enforce segregation, the children would scatter. The other kids in his own segregated Fairfield neighborhood, on the other hand, had no mobility and rarely had any spending money.

“I go back to the South and my roots,” Mays explains. “When you know from your own experience that so many kids have so little, you want to help. You don’t have to think about it. You just know what you want to do.” The Say Hey Foundation: "It Was Automatic"

Concern for less-advantaged kids began to truly motivate Mays when he started on the road with the Birmingham Black Barons (1948–1950) and was able to stay in hotels and make a little money.

“This was a big change for me, since I never had much of anything before,” he says. “So when I was able to give a little back and help kids in my hometown to get something they wanted, it was automatic for me to do it.”

When he decided to set up a foundation, Mays was told he had to have a mission statement, one that it turns out perfectly fits helping the Barbara Sinatra Center for Abused Children.

“I knew the mission statement for my Say Hey Foundation would be helping kids and those who help kids; it was just automatic,” Mays says. “Every time we help a kid or a family, it feels good all over again. This is one of the things I enjoy, and I’m going to keep doing it as long as I can.”

For information on tickets to the Champion Honors Luncheon at Hyatt Regency Indian Wells Resort & Spa on Jan. 14, which will benefit the Barbara Sinatra Center for Abused Children, contact Laura Rogers at 760-773-1636.