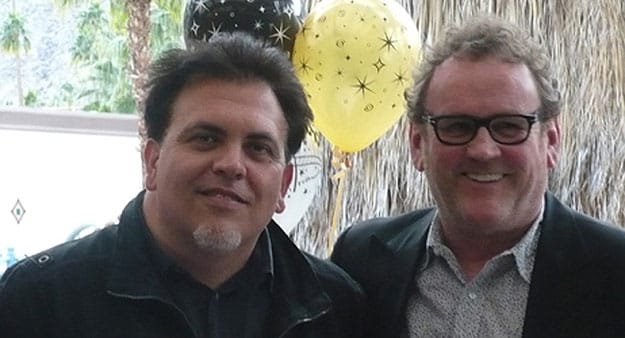 When Mark O’Reilly turns on the faucet, the light fixture buzzes and the bulb goes out. When he shuts off the faucet, the bulb comes back on. With wonderment, he tries this water-and-light show a few more times.

Reaction to this early scene in El perfecto desconocido (The Perfect Stranger) is Spanish director Toni Bestard’s clue to the success or failure of the rest of the movie, he said at a reception following the Jan. 14 Palm Springs International Film Festival screening. Fortunately, the audience at the Annenberg Theater laughed, which he considered a good sign. “You are the first American audience, and I am sure you will be the best one,” he said from the theater stage.

Reactions, in fact, are at the core of Bestard’s film. Colm Meaney stars as Mark O’Reilly, who comes to a small Mallorcan village in search of a resolution to a life-altering event in his past. Because O’Reilly does not speak Spanish, Meaney’s facial expressions are key — and therein lies much of the charm in this comedy-drama.

Meaney (who, like the character he plays, does not speak Spanish) was provided with an English translation of each draft of the script. But he did not review the final script before each scene to understand exactly what the characters were saying. “I found it was better not to know,” he said during a post-screening Q&A.

The actor, perhaps best known as Chief Miles O’Brien on Star Trek: Deep Space Nine and Star Trek: The Next Generation, was Bestard’s first choice for the lead, so it seems amazing that he discovered Meaney had purchased a house in Mallorca and was living 10 miles up the road from him.

What also seems amazing is that The Perfect Stranger is Bestard’s first feature film (his short films have been nominated for Goya Awards (the Spanish equivalent to the Academy Awards) and that the two actors who play troubled teens that bond with O’Reilly — Natalia Rodriguez and Guiem Juaneda — are new to film (though Rodriguez has acted on television).

There is much to appreciate about The Perfect Stranger. Primarily a comedy, it also encompasses mystery in its back story and drama (particularly in the last portion of the movie). Most of all, it is about humanity and the connections people make. Thanks to Bestard’s skillful directing, a wonderful balance of humor and pathos, spot-on characterizations by each of the film’s actors, and an ultimate message of hope, The Perfect Stranger could be considered a perfect picture.

Scheduled to premiere in Spain on March 23 (Bestard was still seeking distribution for a U.S. release during the Palm Springs International Film Festival), The Perfect Stranger was voted by audiences among the Best of the Fest, earning the film a third festival screening.