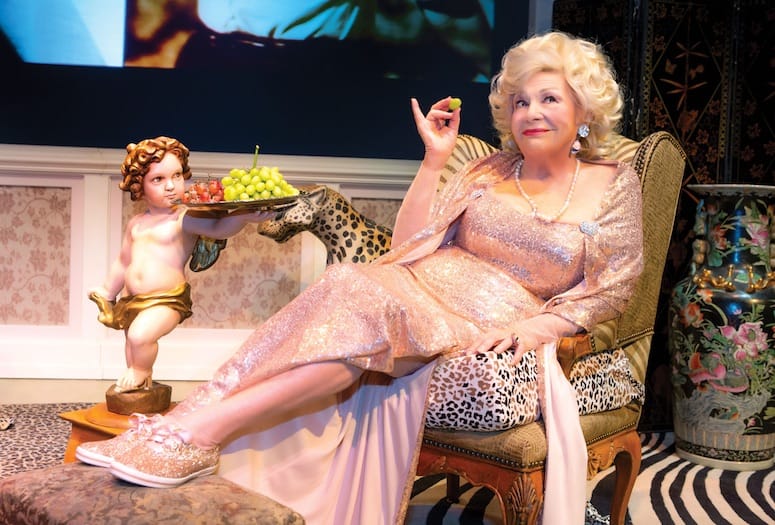 Disastrous opening nights and fad diets. On the surface, neither topic would seem to provoke unbridled hilarity. Then again, you may have never seen the Broadway smash hit comedy, The Play That Goes Wrong or the uproarious one-woman show, My Life On a Diet starring stage, screen and television legend Renée Taylor. Both shows are coming to the McCallum in late January. And both may induce mild to severe cases of the grins, giggles and guffaws.

Described as “a hilarious hybrid of Monty Python and Sherlock Holmes,” The Play That Goes Wrong won the 2015 Olivier Award in the U.K. for Best New Comedy. It arrived on Broadway in 2017 to rapturous reviews, snagging a Tony Award for Best Scenic Design in a Play, and causing venerable theater critics like Ben Brantley of The New York Times to call the play a “gut-busting hit,” adding “the audience roared as loudly as the crowds at any wrestling match.”

After 745 performances on Broadway, the show closed in January 2019, only to re-open a month later at the New World Stages theater off-Broadway where it continues its inspired silliness to this day. The original London production is still wowing audiences seven years after its premiere.

The play introduces audiences to members of the Cornley University Drama Society, which has received a substantial bequest and is putting on a performance of The Murder at Haversham Manor, a 1920’s murder mystery play similar to The Mousetrap. During the play within a play, countless disasters befall the cast, including doors sticking, props falling from the walls, and floors collapsing. But that’s just the beginning.
Cast members are seen misplacing props, forgetting lines, missing cues, breaking character, mispronouncing words, stepping on fingers, being hidden in a grandfather clock, and, well, suffice it to say, things do not go well…all to the joyful delight and howling laughter of audiences worldwide.

The Play That Goes Wrong has been translated and licensed for productions in over 20 countries from China to Iceland to South Africa and Russia. When it originally opened in London, the critic from The Daily Mail gave it five out of five stars and exclaimed, “as it all goes awry, it becomes hard not to gas yourself with laughter. At one point I feared I was going to hyperventilate.”

Celebrities have made seeing The Play That Goes Wrong high on their personal bucket lists. Among the show’s biggest fans are Neil Patrick Harris, Will Ferrell, Stephen Colbert, Rami Malek and Christian Slater, who signed the show’s guestbook with, “What a phenomenal train wreck!! I couldn’t take my eyes off this incredible horror <3.” Nathan Lane wrote to the cast, “You all have my deepest sympathy. Much love and I hope you all find something worthwhile to do with your lives. Cheers. XO.” And the elegant, two-time Academy Award-winning actress Cate Blanchett commented simply, “I actually peed my pants….thank you?”

The Play That Goes Wrong comes to the McCallum for three performances on Jan. 21-22. The Jan. 22 evening performance is presented through the generosity of Henry and Carol Levy.

It takes a bit of a smart aleck to ask a genuine comedy Hollywood icon how her diet is going. Especially when said icon has confessed in a book and one-woman play that her lifelong attempts at shedding pounds have met with less than fruitful results. Gratefully, when questioned, Renée Taylor laughed and said “which one?” And she was on the phone, so she couldn’t hit me. 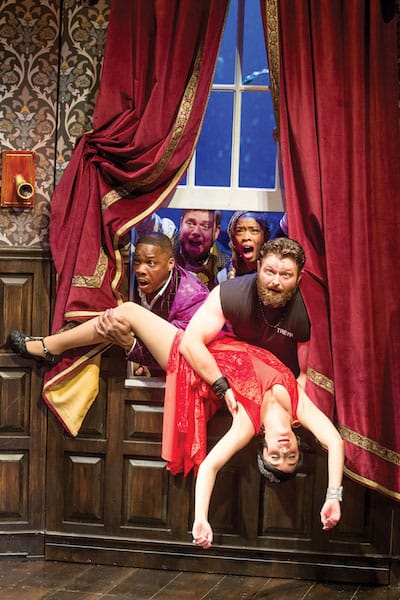 The Play That Goes Wrong comes to the McCallum for three performances on Jan. 21-22.

If you can’t place her name, you certainly know her face and, uh, body of work. At 86 years young, she has had a storied and prolific career on stage, screen and television. Best known for playing Fran Drescher’s mother, Sylvia Fine, on the hit television sitcom, The Nanny, Taylor is an actress, playwright, producer, director, and Academy Award-nominated screenwriter for co-writing the film, Lovers and Other Strangers with her late husband Joseph Bologna, who passed away in August 2017.

Born in The Bronx, Taylor graduated from the Academy of Dramatic Arts and acted with improv groups in the 1950s. She worked as a comedian in the early 1960s at such New York nightspots as Bon Soir where her opening act was the then-unknown Barbra Streisand.

She played Eva Braun in Mel Brooks’ original film version of The Producers and appeared in major roles in such memorable movies as Last of the Red Hot Lovers, A New Leaf, and Made for Each Other, which she also co-wrote with Bologna.

Her TV credits are quite astounding, appearing on shows including The Defenders, St. Elsewhere, The Love Boat, Tales from the Darkside, Thirtysomething, Dream On, Law & Order: Special Victims Unit, 2 Broke Girls, How I Met Your Mother, and Happily Divorced, among countless others.

In 1987, she wrote an autobiographical and self-help book called: My Life on a Diet: Confessions of a Hollywood Diet Junkie, which Kirkus Review describes as “a humorous tour of actress Taylor’s life with food, with her bathroom scale as the guide.” They called it “a diet book with a difference.”

My Life On a Diet, the one-woman show, was co-written by Taylor with Bologna, who also directed the original version which marked its New York premiere in 2018 for an acclaimed, extended Off-Broadway run. Ms. Taylor will perform the play twice in one day at the McCallum at 3 p.m. Jan. 26  and again at 7 p.m. The evening performance is presented through the generosity of Sally St. John.

"I’ve seen many shows at the McCallum so I’m thrilled to get to perform on that stage. And I have lots of friends who live in the Valley. I hope they come to see my show."

Taylor said she was inspired to turn My Life on a Diet into a play when she was appearing in a production of Love, Loss, and What I Wore by Nora and Delia Ephron. “In that show, the characters remembered their lives from what they wore on various occasions,” said Taylor. “I remember my life from what I was doing and what diet I was on.”

It all started when she was a little girl, she said. “When I met someone, I would ask them what diet they were on. I figured if I ate like Marilyn Monroe or Grace Kelly, I would look like them.” Marilyn had her grape diet. Red, green, black. I gained weight on it.”

“When I look back on my life, my career, my marriage, unhappy love affairs, I always thought if I only lost weight, my life would be different,“ said Taylor. That led her to some crazy diets. Along the way, she’s tried the Rockefeller Spaghetti Diet, the Royal Queen Mother’s Diet, Joan Crawford’s Kelp, Vinegar, and B-6 Diet and Joan Collins’ Le Regime Parisian, among others. She recalls trying a Champagne diet which called for two glasses of Cristal before each meal. “It cost $250 a day and I just got drunk,” she says.

When pressed, Taylor couldn’t remember the best diet advice she ever received but talked about several other sketchy pound dropping schemes she tried. “There was the Army/Air Force Diet which consisted of six hard-boiled eggs a day,” she recalled. “Of course, the Grapefruit Diet; the Lord Bryon Diet which, among other things, required two tablespoons of apple cider vinegar on everything and The Hadassah Diet (four kosher chicken legs a day).” She tried The Scarsdale Diet too. People of a certain vintage may recall that the book’s author was rather infamously murdered. “I think the reason she shot him was because she wanted to get off his lousy diet,” quipped Taylor.

Through it all, Taylor is a firm believer in having a positive body self-image. “Just love your fat,” she says. “Accept your fat and love yourself the way you are.”

Taylor’s show is filled with juicy anecdotes and weight loss tips from Hollywood legends. She also shares hilarious and poignant stories about Bologna, her partner in life and work for 52 years. “He was so loved. Wherever I go, people tell me how much they loved him,” said Taylor. “He was also so supportive of me. When Fran Drescher asked him if he wanted to play my husband on The Nanny, he told her he wanted to play my love interest instead!”

Although not a newcomer to the stage by any means, Taylor has spent most of her professional career in film and television. But, she genuinely loves live performance. “Live audiences are emotionally responsive,” she said. “They not only laugh, but sigh and ooh and ahh. It’s wonderful to get that responsiveness from an audience.

Taylor is eager to return to the desert. “I’ve always loved going there,” she says. “I’ve seen many shows at the McCallum so I’m thrilled to get to perform on that stage. And I have lots of friends who live in the Valley. I hope they all come to see my show.”