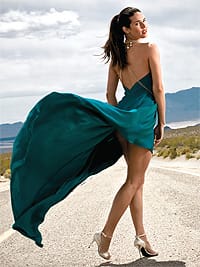 Clothes, Eduardo Lucero says, give women “superhuman powers. They can make her taller, leaner, more alluring.” The Los Angeles couturier believes clothes can infuse a woman with confidence and change her personality.

Lucero, this year’s Fashion Week El Paseo featured designer, is a natural resource for soignée women who live and party in the gala-ridden Coachella Valley. And they have impressive company. Madonna, Catherine Zeta-Jones, Jennifer Lopez, and many others have walked the red carpets wearing Lucero creations. “We dressed Eva Longoria way before she became a huge celebrity,” Lucero says. “And you know on Desperate Housewives when she mowed the lawn in a ball gown? That was ours.”

In Paris, collections flash down the catwalk for instant press. However, no one but a 6-foot genetic miracle or a museum mannequin can don some of these fantasies in real life. Lucero contends that fashion should be relevant. He’s slightly amused at Bravo’s Project Runway “challenges” of dressing “a size 2 to 4 with no breasts.” Would he make double-digit fashions, like a size …10? He laughs. “Size 20.”

Not yet 40, Lucero has been in the business for 15 years. His approach to glorifying his patrons often incites an emotional response. At his Beverly Boulevard boutique, a client, upon seeing just how good she can look, burst into tears.

“Fashion is definitely an art,” Lucero says. “But I don’t like to consider clothing as a piece of art. It should be worn by a real woman.” And she should wear it, not the other way around, he believes.

As for style, Lucero refuses to be pigeonholed. His fall 2006 collection, he says, “was inspired by old Westerns — fringe, saddles, leather tooling, whips!” Last fall, it was futuristic, robotic, sometimes battery-powered. For the spring 2008 line, which will appear March 29 on the Fashion Week El Paseo runway, the mood is split. “The first half is austere and tailored; the second half is draped and ethereal,” he reveals.

A common thread running though the collections, by Lucero’s definition, is “classic, but not traditional.” He has solid grounding in time-honored techniques, having studied at Otis College of Art and Design. Like Picasso, he had to learn the rules before breaking them. Lucero calls his niche “‘special occasion.’ And most special occasions are After Five. This could mean a birthday party, a first date, or the Oscars.”

Artful draping, sometimes even twisting, distinguishes Lucero silhouettes. Shapes are distinctly modern, but they inherit vintage characteristics, such as trains. Often the back is bared. He finds the 1930s fashion era appealing (“It was all about the body flow, a fluid line”) and would have liked to dress the screen goddesses of the ’30s and the ’40s, such as Marlene Dietrich and Ava Gardner. He admires the late cinema designers Adrian Greenberg and Edith Head. He also also admires the 1950s fashions, which he says were about the body, “but creating an hourglass.” He doesn’t have a contemporary muse, but he leans toward women of any age “who have a solid sense of who they are, who don’t get threatened, who are comfortable in their skin.”

As for workmanship, garments that are beautiful on the inside separate class from crass. Lucero hews to the discipline of the great designers, from Chanel to Galanos, who have always been obsessed with interiors.

Seeing his fabrics online or on the page doesn’t tell the story: tactile matte jersey in navy, not black; elaborate textures with pieces snipped out and then re-embroidered with jet beading; raffia ribbon used on a ball gown. Cotton makes a dramatic black evening dress less serious, the scooped-out back centered with equestrian hardware. Style lashed with a sense of humor is his forté.

Born in Mexico, Lucero spent his early years in “a very isolated, desert area, segregated from the rest of society,” he says. “You had to generate your own world with creativity and imagination. … That has to do with being theatrical, maybe.” If you look for a Latin influence, you can find it. For spring 2008, it could be in the sheer polka dot-patterned top with the saucy black bubble miniskirt.

Lucero moved to Chicago with his family when he was almost 8, then on his own to Los Angeles at 17. He never set out to be a couturier. “No one in my family was an artist,” he says. “And I was already accepted at pre-med school.” But a teacher, insisting he was an artist, encouraged him to win a scholarship to Otis. “I thought I’d try one semester. I might have been a plastic surgeon, cutting skin instead of fabric. And women would’ve asked me for the same things: ‘Make me taller, make me thinner, make my arms look better.’”

The designer’s diversified background fuels his ultimate career. For about five years, he performed as a dancer in clubs and music videos, so he understands that clothes need to move. One of his first jobs out of college was as an assistant costume designer for Siegfried & Roy. “In Las Vegas, I learned such tricks as lining lace with nude [material],” he says. As a fashion illustrator and graphic designer, he envisioned how to make a woman taller and slimmer. As a photographer, he could find a way to make clothes the camera loves. It remains part of his ritual to take pictures of clients in his creations. They may trust the photo more than the mirror. “She can’t secondguess a photo,” he says.

As a couture designer, Lucero sometimes swims in snarky waters, but he has a reputation for being pleasant and cooperative. “We try really hard,” he says. “In the beauty industry, we have to be selfinvolved, so we can get into believing our own gospel.” He adds that snobbery shuts off input essential to renewal.

The designer’s plans include more menswear. “Men are beginning to wear ties again. They’re not afraid to look polished in a fresh way,” he says. And he’ll expand his accessories line. He already makes special additions to enhance his outfits, such as separate white cuffs floating above the wrists to accent one of his black dresses for spring 2008.

His companion at the atelier is Booba, a 4-year-old Chihuahua-pug mix. “Booba earns his keep,” he says, explaining that when he is busy with one patron, the little dog entertains the next.

“I wouldn’t want to get bored,” he explains.