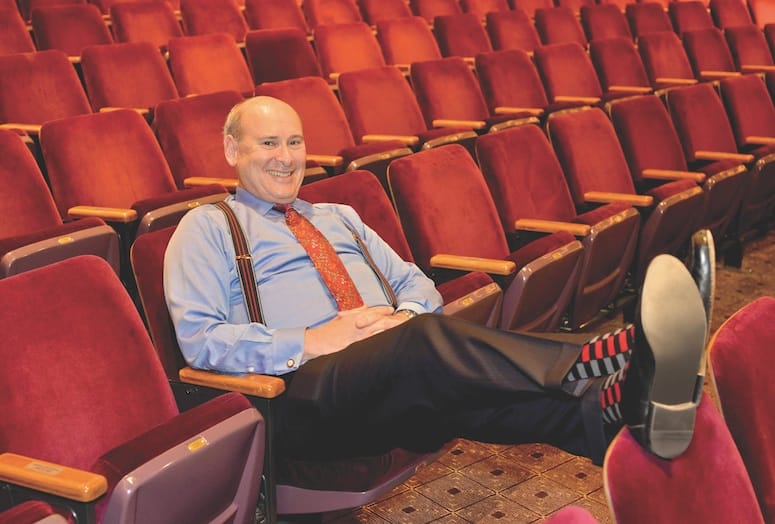 A maestro in his own right, McCallum CEO/President Mitch Gershenfeld bets he booked five awesome programs that will surprise and delight audiences this season
Photo by David A. Lee

In his mid-20s, Gershenfeld — who performed professionally while on the faculty of UW-Madison — realized that there were “a lot of good tuba players in the world but not many great arts administrators.”

He changed careers and never looked back. “A lot of people who go into the administration side of the arts have no background in performing and being on stage,” he says. “Having had that background put me in a much better position to understand what artists need and how to put together a show so that the artist is treated well and the audience gets the best experience.”

Gershenfeld, 57, joined the McCallum in 2000 as director of programming and theatre operations, and the industry publication Pollstar has for 10 consecutive years named the venue among the world’s top 50 theatres. Since taking the top job at McCallum in 2012, he has continued to play a leading role in its programming.

With his success on and off the stage, it should come as little surprise that Gershenfeld feels at ease signing five acts this season that his audiences might not know — but he’s sure they’ll love.

He calls them “Mitch’s Picks,”  a title meant to promote curiosity and invite audiences to experience more obscure gems.

“If we didn’t do something to try to make these shows special, I don’t think we would have sold the tickets,” he says, pointing to actor/singer Cheyenne Jackson, who has never performed a solo engagement in the Coachella Valley. “He’s a fairly recognizable name in the Broadway community but not a household name. I think he’s a magnificent singer, and so I thought he really deserved to be on this list.” Formed in 1985, this virtuosic (and amusing) ensemble has become an institution in the United Kingdom. “They don’t just play, they sing,” says Gershenfeld of the group’s eight members. “The music ranges from Tchaikovsky to Nirvana. It’s all done in a sort of understated British humor. It’s almost like Monty Python meets the ukulele.” Rodney Mack fronts one of the globe’s best brass ensembles, but his name has yet to become as known as that of his first cousin, trumpeter Wynton Marsalis. The group’s theatrical “Brothers on the Battlefield” pays homage to the 150th anniversary of the end of the U.S. Civil War and features six musicians performing everything from John Philip Sousa and Francis Johnson to Elvis Presley, The Beatles, and Earth Wind and Fire. “It’s really the African-American experience in music from the Civil War through civil rights,” Gershenfeld says of the multimedia production. “It’s not told with only music. There are images and an actor. Besides the fact that I was a brass player and I like brass music, it seemed like a really interesting program.

MONA GOLABEK
in The Pianist of Willesden Lane
Feb. 25, 8 p.m. Gershenfeld calls this piece — based on the book The Children of Willesden Lane by Mona Golabek and Lee Cohen, and adapted and directed by Hershey Felder — “a very intense drama, a very serious play.” Set in Vienna in 1938 and in London during the Blitzkrieg, the story revolves around a young Jewish female pianist whose ambitions are crushed by the Nazis and features Golabek performing haunting piano music as she imparts her mother’s captivating survival tale. “This couldn’t be more different than the ukulele,” Gershenfeld says. “Non-musical theatricals are kind of a hard sell, so I thought we should give more promotion to this.” 2Cellos are 27-year-old Luka Šuli and 28-year-old Stjepan Hauser, two classically trained musicians who met as teenagers in a master class in their native Croatia. They burst onto the global music scene in 2011 when a video of them performing their cover of Michael Jackson’s “Smooth Criminal” went viral on YouTube, scoring 3 million hits in the first two weeks. “In Eastern Europe, they sell out stadiums; they’re huge stars,” Gershenfeld says of the pair, who opened for Elton John for a yearlong tour. “It’s one of those things that’s hard to describe, which is probably why they belong on ‘Mitch’s Picks.’ It’s not Yo-Yo Ma cello. These guys play [Guns N’ Roses’] ‘Welcome to the Jungle’ on the cello. They play Aerosmith. They play all kinds of different things. It’s a new kind of way of understanding music that the cello can play.”

Visit www.mccallum-theatre.org for information and tickets.