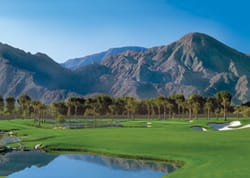 We sit on our sofas and watch the golf pros on television hit shot after shot, drive after drive, putt after putt, and we think, “I could do that.” So we drive to our favorite municipal golf course filled with ego and will and a perfected stance … and we shoot 106. In most parts of the country, we’d take our 106 home and go on dreaming. While the likelihood of becoming one of the legends of golf is still farfetched, opportunities exist throughout the Coachella Valley to challenge them on a more even playing field: the manicured greens and fairways designed by the sport’s most acclaimed golfers.

Want to tee it up with LPGA Hall of Famer Amy Alcott? Think you could run through a mulligan-free round against Gary Player? Imagine that you could whip Nick Faldo into a frenzy? Certain that you could take on Jack Nicklaus and earn at least one par? Positive that there’s no possible circumstance under which you could be bested by Arnold Palmer? All five are waiting for you. Here’s where to find them.

The good news about the immaculate Toscana Country Club in Indian Wells is that if you’re fortunate enough to live within its exclusive gates, outside your window are two golf courses that Jack Nicklaus calls “distinctively challenging, yet playable.” read more

It doesn’t take long to figure out how three-time Masters Champion Nick Faldo influenced the design of the 6,923-yard course at Marriott’s Shadow Ridge Golf Club. Absent the heat of day and clear blue skies, you’d swear you were in Australia. read more

Even those who don’t know golf know Arnold Palmer. He’s part of our collective cultural DNA to the point that his name alone stands for a certain brand of quality — an aspect that didn’t escape the City of La Quinta when it was looking at bids from course designers charged with turning the former Ahmanson Ranch into a premier golf destination. read more

In her prime, Amy Alcott was considered one of the most driven and focused golfers in the LPGA. Her ability to perform in the clutch resulted in 29 tournament victories, including her 1991 victory at the Kraft Nabisco in Rancho Mirage, punctuated by her subsequent dive into the murky depths aside the 18th hole. For her first outing as a course-design consultant, she teamed with course architect Casey O’Callaghan, who recently completed another course with Tom Lehman in Mission Viejo. read more

There’s not much in the world of golf that Gary Player hasn’t achieved since his professional debut in 1953: nine major championships, nine senior major championships, 163 tournament victories, and more than $12 million in career earnings. So it’s no surprise that when Player turned to golf course design in the early 1980s, he quickly became one of the premier players in his new field. read more