The Pros of Nonprofit 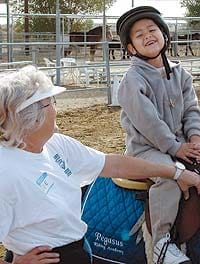 But even with those noteworthy life experiences, Hochberg never received the kind of comment he got from Jim Lewis after shooting a 6 1/2-minute documentary for the Coachella Valley Rescue Mission.

“Joel, you’re a blessing,” said the mission’s executive director, adding that the documentary, Success Stories, captured the essence of what the mission is all about.

Hochberg conducts interviews, shoots, edits, lays down a soundtrack, and burns DVDs for nonprofit organizations out of the goodness of his heart. Lewis’ comments are symbolic not of what he heard after winning awards for McDonald’s and Bud Light commercials, but from the charities he helps in the Coachella Valley.

“That pretty much is the psychic reward that I get from doing this. They are well received, and I feel proud of them,” Hochberg says. In addition to helping the rescue mission, he has provided gratis documentary coverage of the La Quinta Arts Foundation’s Plein Air Festival, the City of Hope Cancer Center’s Hike for Hope, McCallum Theatre Institute’s Choreography Festival, and Les Dames d’Escoffier’s L’Affaire Chocolat.

“I love doing it,” he says. “I love the valley, the meeting of people, the exchange of ideas, and equally I love the fact that [the documentary] is usable.”

Noting the number of worthwhile charities in the desert, he adds, “Obviously, I can’t make a video for all of them.” In addition to the constraints of so many hours in a day, he points out that some events, such as golf tournaments, “just don’t make interesting film.”

Like many retirees after a couple of trips to Europe, Hochberg found himself searching for a fulfilling pastime. When he and his wife were moving to the Coachella Valley in 2003, a friend informed them she had lost her eyesight. Her courage so impressed them that Hochberg decided to shoot a documentary about her experience. When the cameraman he hired became unavailable, he bought his own professional camera to do the job himself. Now he had expertise and equipment in need of purpose.

In the desert, I was looking to do something creative,” he says. Applying his passion for filmmaking with nonprofit projects provides that outlet. “It allows me to give back and participate in the community in a way that uses my particular talent. Anybody can give money — and should give money,” he says. “I enjoy giving part of myself.

“If I charged for my time, it would be substantial, but it’s my time, and I do enough of playing tennis and racquetball and going to dinners.”

Hochberg believes he is but one example of how retired professionals and nonprofit organizations can enjoy a symbiotic relationship.

“There’s an amazing resource of brain power and talent, I think, waiting to be tapped. And the reason I am confident in saying that is that even in my small group of friends who are retired, in conversation they say they would love to participate in something.”

In addition to a number of people who enjoyed careers in Hollywood, former CEOs of international companies, and people with expertise in accounting, construction, law, and marketing populate the desert communities. Creative marketing, in particular, can increase fundraising efforts. When Hochberg was working for a large ad agency in Chicago, the classical music lover was involved with the Orchestra of Illinois. After winning a fund-raising auction bid to conduct the overture of his choice, he came up with a way to increase the orchestra’s revenue on that item. Using his connections with other ad agencies, he sold them opportunities to have their clients’ jingles included in an overture of advertising music. The result was another $20,000 in the orchestra’s till.

“I think if an organization were smart enough, they would reach out to these people, depending on their needs,” Hochberg says. “It is incumbent on those organizations to find out who are these people.” For starters, he suggests, they should look to their own boards and ask, “Do you know anybody who used to …?”

“The chances are that network produces a number of names for them to contact,” Hochberg says. “And to the individual who is giving part of their expertise, it is very flattering.”

At the same time, retirees need not wait to be called upon. Hochberg suggests, “Find your passion and tap into it.”

That’s what photographer Maile Klein did after a 15-year career as a firefighter and public information officer for the San Diego Fire Department. Having retired on disability after falling through a roof while fighting a fire, Klein planned to make her way to Los Angeles to learn filmmaking (she had a degree in photography from the City College of San Francisco and had shot stills and video for the fire department), but instead found herself going through a healing process in the Coachella Valley. When she saw an ad for a lab technician at College of the Desert, she applied.

“I just can’t sit still,” she says. “I was 40-some years old. I was retired, but not tired.” She subsequently became a freelance photographer and a volunteer for Pegasus Riding Academy for the Handicapped.

“I started walking the horses, walking with the kids, and that’s when I realized they could use a lot of publicity photos,” Klein says. She started bringing her camera when she visited the academy, then photo-graphed their fundraising polo match — all without charge.

“If you are lucky enough to work in this town, you need to give back,” Klein says. “That’s really what this town is about. Our No. 3 industry is fundraising. … This is like finding a home with Pegasus. This is how I am going to help.” Now she wants to film a documentary on Pegasus with her new camera, sound, and editing equipment. But her good deeds don’t stop there.

“A lot of kids involved with Pegasus are also involved with Angel View [Crippled Children’s Foundation],” Klein says. She contacted the charity’s publicist, met some of the children, and began photographing Angel View’s fundraising luncheons, award ceremonies, thrift stores, and the children.

Klein also took pictures of the children at the Angel View camp in Joshua Tree, and Leanna Bonamici agreed to make her Casablanca Studios in Desert Hot Springs available without charge for more photographs.

“I’m trying to give them a big cache of photographs that they can use for PR work or whatever they need to help the cause,” Klein says. Pictures from both Pegasus and Angel View are posted on those organizations’ Web sites.

Though Pegasus and Angel View are Klein’s pet charities, she drastically discounts her services for any charity.

“People tell me I’m not a good businesswoman,” she says, referring to the small amount of money she gets for a lot of time and effort. “It’s probably because I love what I do so much, and I find all of these causes very worthy.” She also believes the good she does returns to her.

“It all comes back,” she says.