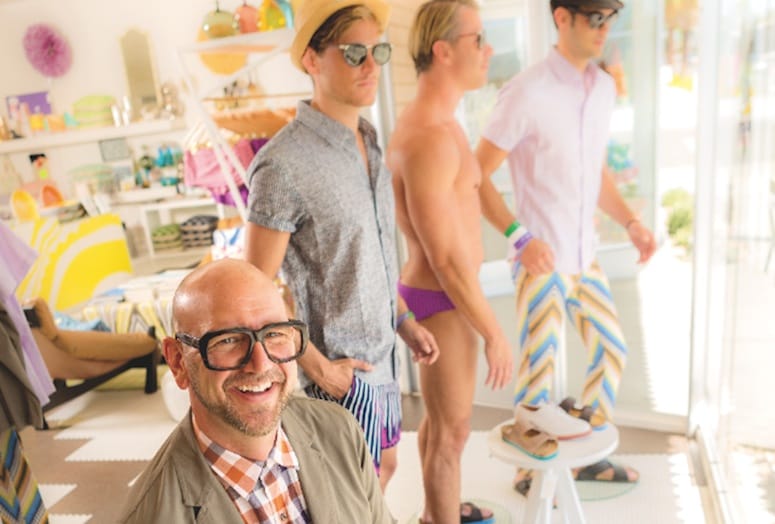 The creative force behind Palm Springs–based menswear label Mr. Turk is not, in fact, “Mr. Turk.”

He is Jonathan Skow, husband of designer Trina Turk. Since its inception in 2002, Mr. Turk has cannonballed into the resortwear scene with a splash — of color. With florals, plaids, and stripes aplenty, the line is like an edgy Lilly Pulitzer for men.

Tailored, trim-cut blazers are paired with paisley pants swirling in pink, marigold, and blue. Whether it’s the country club or the nightclub, Skow says that decked in Mr. Turk, you’re sure to turn heads.

You were a noted fashion stylist and photographer. What motivated you to transition to designer?
I always wanted to be in fashion; my main motivation in life was clothes. I met Trina at the University of Washington while she was in the fashion design department, and I started photographing her clothes. We moved to L.A., and I worked as a stylist for 14 years. Then, from 2001 to 2007, I was a photographer. While doing this, my contribution to the Trina brand became more important and less about photography. The whole reason I wanted to be a photographer is because I wanted to be a designer. But being a designer seemed so bold. Being a fashion photographer seemed more realistic.

How did Mr. Turk come to be?
It started when we opened a men’s store in Palm Springs in 2002. Back then, we were primarily using women’s fabrics that we thought would work for men and cutting them into men’s silhouettes.

Do people think your name is Mr. Turk?
Yes [laughs]. The name actually started as a joke. As Trina became more famous, people would assume I was Mr. Turk. And it would just crack us up.

What draws you to the desert?
The weather, the archi-tectural heritage, that you can see all these intact midcentury homes is a constant inspiration. It’s our home away from home that has started to feel more like home than home.

What’s next?
This spring is the first season we are selling to other stores. We are slowly trying to build awareness of the brand. I’m really enjoying using social media as a tool for marketing. It’s a whole new way to express the brand. I’m excited to be at the forefront of such an exciting new way of selling and marketing clothes even at my age.