The Return of the Pink Panther - Paula Creamer, the LPGA’s rookie phenom, at the 35th annual Kraft Nabisco Championship. 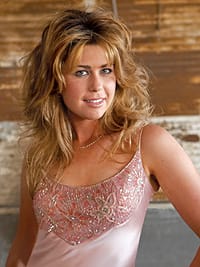 Paula Creamer, the LPGA’s rookie phenom, intends to cut her way through the “quick and thick” and plunge into Champions Lake at the 35th annual Kraft Nabisco Championship at Mission Hills

Meet a  professional golfer who actually beckons rain and wind. But then, Paula Creamer is not your typical golfer. Nicknamed the Pink Panther for the way she prowls courses and for her fondness for the color pink, Creamer embarks on her sophomore season at the LPGA’s first major of the year — the Kraft Nabisco Championship at the Mission Hills Golf Course in Rancho Mirage from March 27 to April 2. Showers or clear skies, this 19-year-old looks forward to her return to this historic course and sets her sights on being the one who takes that traditional victory plunge in the waters surrounding the 18th green.

Mission Hills is a golf course that I feel very comfortable at,” says Creamer, named Rolex Rookie of the Year in 2005. “It’s a great course that has gotten longer over the years with more par 5s. When the wind blows, the shots can be very difficult. You can count on the greens always being quick and the roughs being very thick.”

Last year, Creamer tied for 19th and watched LPGA leader Annika Sorenstam leap into the water with her sister, after snaring a comfortable eight-stroke win over Rosie Jones. The par-5 18th ends with an island green sitting right in front of the clubhouse.

"Mission Hills features one of the best finishing holes," says Creamer, who will travel with her parents, Paul and Karen, and some other relatives to this year’s event. “I love walking across the bridge to the final green and having people in the stands clap for you. This is such a famous, prestigious event that I want to win. To be able to jump in the water after winning would be so awesome.”

Yes, awesome — sincere speech from a youngster who wowed the crowd at her last visit to the desert. She finished second behind Sorenstam last October at Bighorn Golf Club in Palm Desert during the invitation-only Samsung World Championship featuring the world’s 20 best women golfers.

“The wind was blowing, making play very difficult, but the wind and rain bring out my mental toughness, one of the strengths in my game,” she says. “I love coming to the desert to play. The mountains are so pretty and the sunsets are beautiful.”

For Creamer, her professional life is on the rise. She became the youngest player ever to be named to the U.S. Solheim Cup team. She rewarded team captain Nancy Lopez by turning in a 3-1-1 performance as the Americans reclaimed the cup from European-born LPGA players last September at the famed Crooked Stick Golf Club in Carmel, Ind.

Creamer claimed four wins on three continents last year. Age was anything but a deterrent when her birdie on the par-5 18th hole at the Sybase Classic in New Rochelle, N.Y., last year spotlighted her as the youngest player to win an LPGA event in 53 years at age 18 years, nine months.

Did we mention that she earned nearly $1.5 million on tour — second only to Sorenstam? Or that she tied for first in the lowest putt-per-hole average?

Crowd-pleasing performances by the crop of teens, led by Creamer and Michelle Wie, are gaining notice — and respect — by all, including Sorenstam.

“I think Paula Creamer should get credit for winning,” Sorenstam told reporters covering the McDonald’s LPGA Championship at the Bulle Rock Golf Course in Havre de Grace, Md., in early June. “The young ones have great attitudes. They’re not afraid of anything. They’re ready to take that big step. That’s exciting for me to see.”

Despite having graduated from high school last May and her 20th birthday being in August, Creamer sets her sights on surpassing Sorenstam.

“Annika has raised the bar in women’s golf,” Creamer says. “But my goal is to be the No. 1 player in the world by the end of this year. I like to play with Annika, because she is the best. I want to be there and watch what she does and how she competes and how she hits her shots. But on the course, I am playing my game and she is playing her game. I focus on what I have to do because I know I can’t control what others do.”

To accomplish this, Creamer intends to follow the advice of her caddy, Colin Cann, and stick to her winning game plan.

“We have a good chemistry, we both want to win, and we’re both competitive,” she says. “He has caddied great players like Annika and Grace Park and knows what it takes to win on the golf course. He reminds me to stick to my routine, to what works."

Creamer shared her rookie season with fans by posting her ups and downs in a series of blogs posted on the LPGA Web site. Yes, she did lose her golf clubs at airports — twice. She dined on sushi (one of her favorite foods) in Japan, met President Bush in the White House with the rest of the U.S. Solheim Cup team, shared that she is a big fan of singer Jessica Simpson, and did some “serious shopping” at Caesar’s Palace in Las Vegas. Oh, she also loved the 10-minute ride in a red Ferrari driven by The Donald.

“Donald Trump is so cool — a very genuine man,” Creamer says. “He picked me up in his Ferrari outside the hotel to drive me to the golf course 10 minutes away. He offered to let me drive, but I said, ‘No thank you.’”

She recognizes that her decision at age 12 to scrap plans to become an acrobatic dancer and to focus on golfing is paying off. She offers words of wisdom for pre-teens looking to follow her path.

“If you are truly serious about golf, then you need to give up a lot of things,” Creamer says. “Do not expect to live a normal teenage life, because this game takes up so much of your time. But it is a game you can play forever, and you get to travel all over the world and meet so many wonderful people. Believe me, it’s a great life.”

AT A GLANCE: PAULA CREAMER

Born: Aug. 5, 1986
Height: 5 feet, 9 inches
Education: 2005 graduate of Pendleton School in Bradenton, Florida
Nickname: Pink Panther
Golf Milestones: Began playing golf at age 10 with her dad, Paul, at Northern California courses. At 12, she quit acrobatic dancing to devote full attention to golf. In 2003, she was named American Junior Golf Association Player of the Year. In 2004, she was named Amateur of the Year by both Golfweek and Golf Digest. Turned pro and joined LPGA in 2005 at age 18.