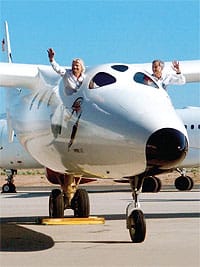 Jim Sheehy’s lifelong interest in space landed him an elite position in the travel industry: a partnership in Palm Desert-based Protravel International, which has gained accreditation as one of the country’s 45 Virgin Galactic space agents (1,000 applied). This means Protravel can book slots on Sir Richard Branson and Burt Rutan’s commercial SpaceShip Two (shown with the two at right), which could begin operating in 2011.

“I was interested in travel, but I also had an interest in space,” says Sheehy, a former Boy Scouts merit badge counselor in astronomy and current member of Virtuoso, a luxury travel provider consortium.

After Virgin Galactic selected him, Sheehy traveled to Florida for training on NASA’s suborbital experience and to learn how to sign up clients. He has since taken $20,000 deposits for the 2.5-hour getaway from two men on the East Coast.

After the July 28 unveiling of Virgin Galactic’s mother ship and the resulting media coverage, Sheehy says, “We noticed a big increase in the number of people that went to our Web site for information, and we also got a good number of calls coming in — about 10 calls and 150 hits on the Web site,” which could turn into deposits.

Sheehy, who joined other accredited agents at Mojave Airport in August for a firsthand look at the mother ship (no cameras allowed), thinks he might get an opportunity to ride in SpaceShip Two. “If they say there’s space on one of the trips, I’d take it,” he says.