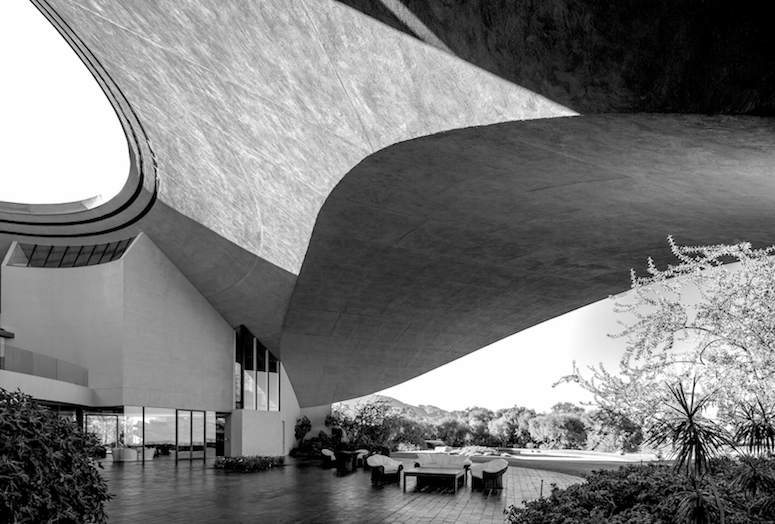 Lovers of irony should appreciate Dennis Yares pointing out that the first house to be built over the past 25 years in Palm Springs’ Southridge neighborhood sits on the hillside perch of the community’s original sales office. The gallery owner and his wife, Molly, hired Lance O’Donnell’s O2 Architecture to create on their lot “an environment where art and architecture are integrated in a modernist, minimalist setting.”

“There is an evident vibrational and majestic aura [in Southridge] that exudes integrity and reflects longevity, magnified by the preservation of a pioneering midcentury modern thrust that began in 1962 with the first home and has been further substantiated by our home built 55  years thereafter,” Yares says.

The Steve McQueen House designed by Hugh Kaptur, as well as an adjacent lot, ended up with four suitors this year. Under the homeowners association’s CC&Rs, current community residents have first right of refusal within 30 days of an offer to purchase a property. With a potential buyer in escrow, three Southridge locals stepped forward.

Patrick Jordan and Stewart Smith of Patrick Stewart Properties use words like “renaissance” and “resurgence” when talking about the activity that has swept the hillside.
“It’s like a shining star,” Jordan says. “Important architecture is being renovated. It took 15 years, but the tide is flowing back in.”

“For a number of years, there were several properties with deferred maintenance, and now all of that is changing,” Smith says. “With that comes new interest in Southridge.” 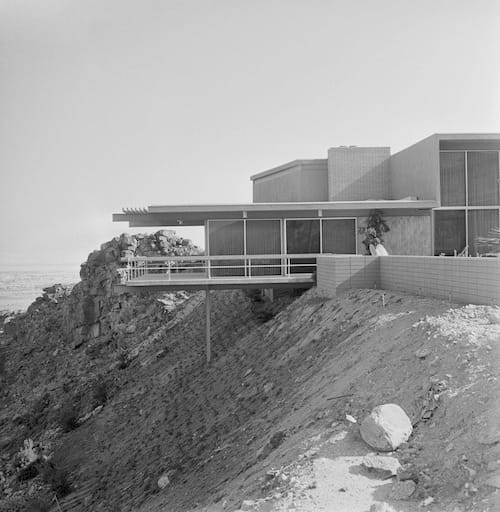 Patrick Stewart Properties held the listing for the Hope property, which billionaire Ron Burkle acquired in November for $13 million.

“I love architecture. And when I see something that I have known or admired or think is amazing and it is in bad condition, I enjoy buying it and putting in back to where it looks like it once did — or closer to the architect’s intent than it ended up,” says the investor and philanthropist.

This marks his second Lautner property in Southridge: He owned the Elrod House from 1995 to 2003 and renovated it during that period.

“I always thought Frank Lloyd Wright and John Lautner were architects with whom everybody connected,” says Burkle, who also owns Wright’s Ennis House in Los Angeles. “The Elrod House was in a state of disrepair when I bought it. I never had any intention of living there; I bought it for its beauty. I did that with the Ennis House, which took five or six years to renovate.” He estimates restoration of the Hope residence will take about 18 months.

“The Hopes changed the house more attuned to the lifestyle of somebody who didn’t want the original intent of the house,” he says.

Burkle admits to having seller’s remorse over the Elrod House, which celebrity designer Jeremy Scott bought in September for $7.7 million. In fact, he considered trying to get the property back after he learned about the sale, but changed his mind when he met Scott and realized their shared passion for great architecture.

“John Lautner is my favorite architect. I love the world he created, and living in his works of art makes me happy,” says Scott, who lives in Lautner’s Sheats-Goldstein House in Los Angeles. “The Elrod House is one of his best works, and I had been fascinated with it since before I even realized or understood architecture or John Lautner. I plan to enjoy it immensely and create new memories in this icon of design.” 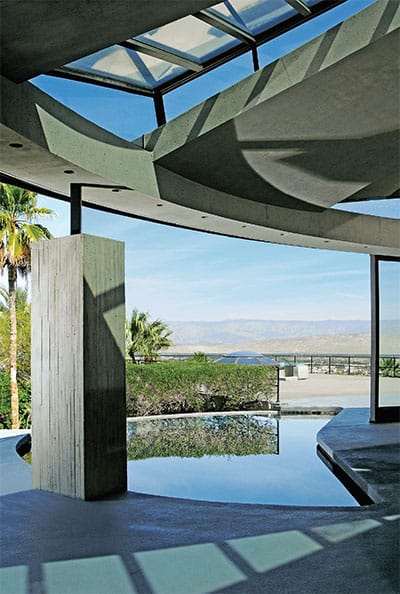 PHOTO BY DAN CHAVKIN
The Elrod House has been through a number of owners, including Ron Burkle, who painstakingly restored it. He now owns the Hope House.

Completed in 1962, the community’s first home was heralded in a 1961 article in The Desert Sun as being “designed by Beverly Hills architect George MacLean, with interiors by Palm Canyon Interiors of Palm Springs.” The newspaper did not identify the homeowner as Swiss industrialist Max Stoffel.

It took a few more years before a handful of architects joined the challenge of taming the rugged landscape to unlock the majesty of the hillside’s sui generis views. Among the projects, in 1964, were Cody’s house for Goldberg and Kaptor’s creation, whose first owner was music publisher Edwin H. “Buddy” Morris. Lautner’s Elrod House capped the decade in 1968.

The onetime Holden residence designed by Buff & Hensman FAIA, the Hope residence, and Edward Giddings’ residence for David Janssen built in the 1970s and ’80s added cachet.(Janssen died three years before his home was completed in 1983.) Until the Yareses, the last dwelling built on the hill was the 1992 Boat House, whose architect doesn’t like what his late client did to it.

“As that project was being completed, Jeffords had a girlfriend who was an interior designer,” says Johnson, who maintains a design studio in Phoenix, Arizona. “That started mucking things up and I walked away from it. I don’t really claim the house, because he made a lot modifications.” Still, he notes, “Southridge was always intriguing to me as a young man and architect.” 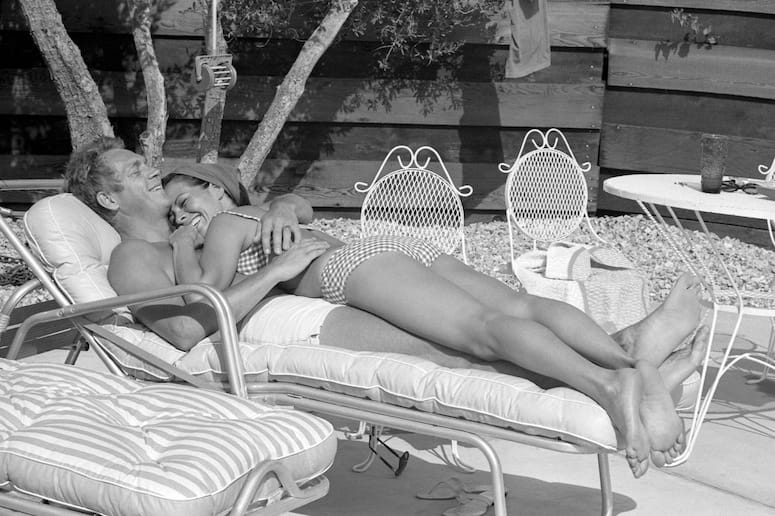 PHOTO BY JOHN DOMINIS/GETTY IMAGES
Steve McQueen and his first wife, Neile Adams, get cozy in the privacy of their yard.

Pedigree, unfortunately, does not immunize communities from intruding factors, such as individuals invested less in the integrity of a property than in making money through rentals for vacations and parties. When an investor defaulted on mortgages that included the Elrod, McQueen, and Boat houses, Lloyds Bank took possession in 2016 and Nelson-Moe Properties became the listing agent for those homes, as well as two adjacent lots.

‘“I have toured the Elrod house a couple of times with the contractor and Jeremy,” says real estate agent John Nelson, “and it’s going to be incredible.”

“The house has not been lived in for many years and is in desperate need of many repairs,” Scott says. “It had been let fall into neglect and had poor choices made by the former owners. I have gone back to original blueprints and images of the house held by the Getty [Research Institute], which has John Lautner’s archives. All this is being lovingly guided by Mark Haddawy, who is the undisputed Lautner expert when it comes to bringing [the designs] back to life. He has demonstrated this so deftly with his own Lautner home [the Harpel House] in the Hollywood Hills. As great work takes time, I would say we still have another two years [of work on the Elrod House].”

According to Nelson, CBS news correspondent Barry Petersen and his wife, Mary Nell, bought the Boat House as a winter home and are investing in pool renovation and cosmetic work. The Colorado couple had been looking at houses in Palm Springs for a while.

“Everything they looked at,” Nelson recalls, “Barry said, ‘I don’t feel like I am in Palm Springs.’ The minute he walked into the Boat House, he said, ‘This is Palm Springs.’ ”

The allure of Southridge also struck designer and builder Michael Johnston and lyricist/director David Zippel when they visited Cody’s Goldberg House in 2003 while it was being rented by one of Johnston’s design clients from New York. For the past six years, Johnston and Zippel have lived in another Cody creation: the 1967 Palm Springs Glass House in Old Las Palmas. The couple won Palm Springs Modern Committee’s 2010 Architectural Restoration Award for its renovation. Their purchase of the Southridge property gives them a new mission.

“We are doing a complete restoration,” Johnston says.

“[The Cody house] needs a lot of love,” Zippel adds, noting that it needed work even when they saw it 14 years ago.

“I think [the renaissance of Southridge] has finally hit momentum,” Johnston says. “Some of the houses up here exemplify the Palm Springs modern lifestyle. Our love is restoring and preserving the great architecture and history of Palm Springs.”

“[Southridge residents] seem so upbeat because of all the new buyers coming in with the intent of bringing grandeur back to spectacular versions of midcentury architecture,” Zippel proclaims. 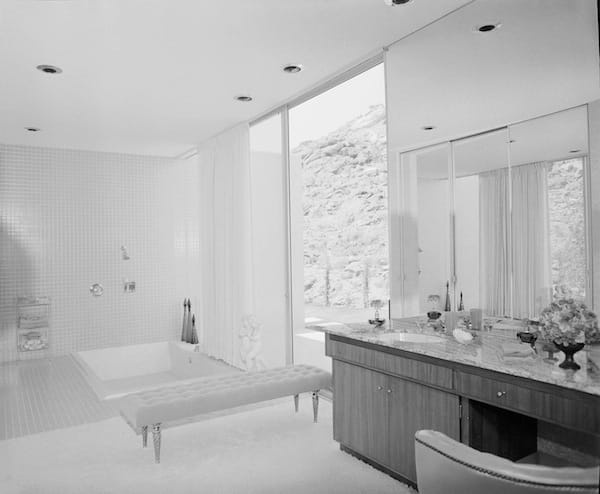 “What attracted us to the Southridge site primarily,” Yares says, “was the exclusivity of the community and the underlying historical aspects of an iconic neighborhood aside from the foundational architectural contributions. A seed was planted with the first major renovation executed a few years ago and completed prior to construction of our residence. And what has followed rather expeditiously is a renaissance — a rebirth where homes that had sat dormant for years have been acquired and are undergoing transformations while sustaining the original intention of the visionaries who collaborated in creating a diverse community that, at the same time, strives for continuity. The influx of new ownership is determined to bring Southridge back to its level of elegance and importance.”

“I am excited about what’s going on out there,” Burkle says. “Palm Springs has always been a great place for architecture. Jeremy and I are taking turns getting archives out of the Getty so we can look at every iteration [of plans] to see what Lautner was thinking.” “I’m flattered if in any way my purchase of the Elrod House has helped revive interest in Southridge,” Scott says. “I absolutely love Palm Springs, and I could not imagine a better place to live than Southridge. I was thrilled last year when Ron told me he was planning to purchase the Hope House, which is an extraordinary property. Plus, he has a tennis court, and it’s always good to know a neighbor with a tennis court!” 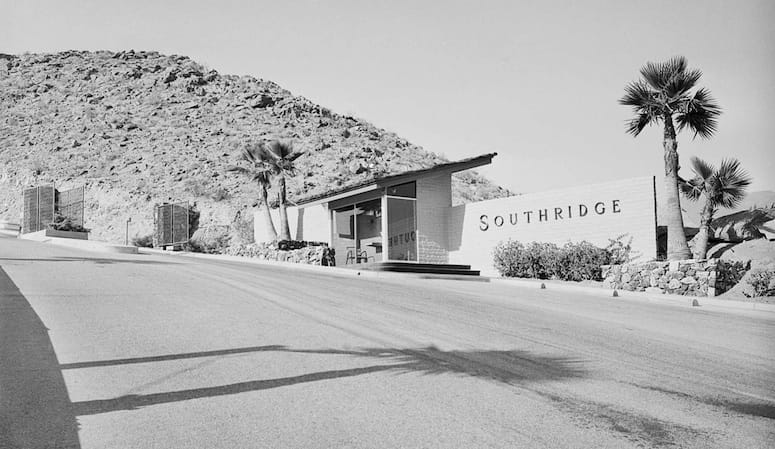 “Southridge Provides New PS Landmark,” announced a headline in the Oct. 27, 1961, edition of The Desert Sun.

According to the newspaper, the plan for a community on the hillside called for 46 lots along a lighted, palm-lined roadway. “All the lots in the development have been valued by the developers at some $2 million, but improvement on the land will raise the value up to ten times this figure,” Fred Weigel wrote. At the time of his article, one house was nearing completion.

Although the neighborhood’s first homeowner was anonymous at that point, his name had been published in another context in a Sept. 5, 1956, Desert Sun article titled “Personalities at Biltmore Over Labor Day Weekend”: “Max Stoffel from St. Gallen, Switzerland, was on his first trip to the desert and hopes to return next year with his family. He is the head of Stoffel and Co., outstanding  in the textile world.”

Stoffel’s name also appeared in the newspaper on July 23, 1965, above the Desert Sun nameplate. “Bob Hope ‘Ready to Go’ on New Palm Springs Home” noted that the celebrity comedian’s neighbors would be Stoffel and Morris.

Others ready to jump on the bandwagon could look at three properties for sale at press time: the David Janssen House, listed for just under $7 million, and, listed for closer to $8 million, the Modern Round House. The 1978 permit on the latter names Dr. Harold Katzman as owner and describes the project as a “seven-room, two-story, circular residence.”

Dr. Todd Katzman, an orthopedic surgeon in Anaheim, does not recall the name of the individual who designed his parents’ Southridge house, but says it was someone in the desert “who had built some round things before.”

He notes that his parents, who used the house as a weekend getaway, were attracted to Southridge for its combination of privacy and views.

The Janssen and Katzman properties have their own site (www.palmspringshills.com) in a rebranding campaign initiated by Will Fuller and Josh Reef of Beverly Hills–based Hurwitz James Co. The name is a twist on the renown of Beverly and Hollywood Hills.

“We are not changing the name of the community. It’s always going to be Southridge. It’s just rebranding,” Reef says. “They have new blood, new buyers who are passionate  about the hill.”

“It is in good shape, but somebody will probably spend $400,000 to $500,000 to polish it and make it spectacular,” says Randy Roy, who holds the listing for HK Lane/Christie’s International.

“What’s happening in Southridge is so amazing,” he continues. “Many of the properties have languished, but now people are ‘getting it.’ They know you can’t find a location like that anywhere else.”