Palm Springs | architecture - The Shape of Something to Come 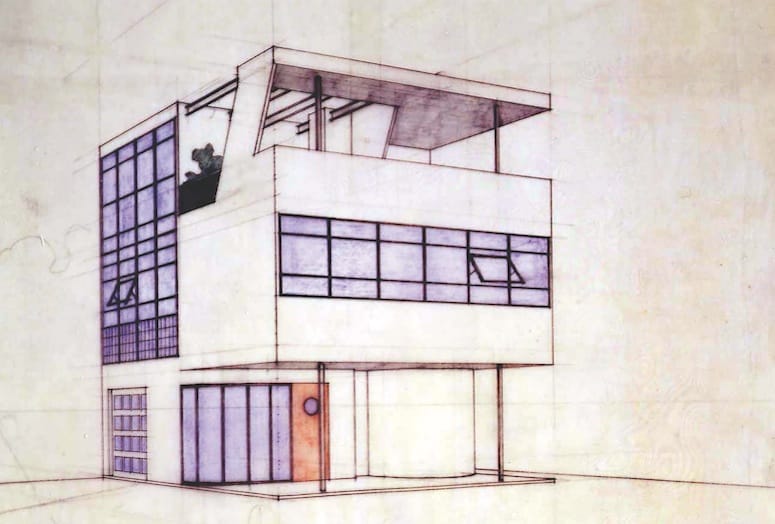 Plans are now firm for the next big attraction for Palm Springs, an installation that may rival the Marilyn Monroe statue, at least for architecture fans. It is the famous Aluminaire House, designed by iconic Palm Springs architects Albert Frey and A. Lawrence Kocher.

The idea of bringing the Aluminaire House to Palm Springs resulted from a lecture given by New York Institute of Technology professors Michael Schwarting and Frances Campani during Modernism Week 2014. In the audience were Tracy Conrad, CEO of Smoke Tree Ranch, board member of the Palm Springs Historical Society, and advisory board member of the Palm Springs Preservation Foundation; Mark Davis, Modernism Week board treasurer; Brad Dunning, a designer and well-known modernism preservationist; Elizabeth Edwards Harris, architectural historian, writer, critic, and preservationist; and William Kopelk, a landscape architect, former president of the Palm Springs Preservation Foundation, and former chair of Modernism Week. The architectural movers and shakers cooked up the scheme to bring the house to Albert Frey’s almost-hometown. Eventually they sold the concept to Palm Springs Mayor Steve Pougnet, who is now solidly behind the project.

When it finally arrives, your out-of-town guests will want to see it and expect you to know all about it.

Here are some facts to impress them:

The house’s architects, Albert Frey and A. Lawrence Kocher, who later created so many of Palm Springs’ iconic structures, designed the Aluminaire House as their entry at New York’s Architectural and Allied Arts Exposition in 1931. (It didn’t win the top prize. That went to the Empire State Building.) By the way, the “A” in A. Lawrence Kocher stands for Alfred.

During the seven days of the 1931 exhibition, more than 100,000 people toured the three-story structure, the first all-metal prefabricated house in the U.S. Who wouldn’t be curious about this simple tin box in the middle of the rococo ornate Grand Central Palace?

The house is 23 feet by 28 feet, built of aluminum and glass. It stands three stories tall and comprises 1,100 square feet. The floor decking and the windows are steel, but the exterior and the interior walls are unanodized aluminum. The floor is linoleum.

The entire house, once it is taken apart, will fit into one 45-foot container for shipping. It has five rooms.

The word “aluminaire” is a mashup of “aluminum” and “luminous.” Architect Wallace K. Harrison bought the Aluminaire House for $1,000 and moved it to his Long Island estate in the 1930s. (Above) The house was relocated and rebuilt on New York Institute of Technology’s Central Islip campus beginning in 1988.

The Aluminaire House is known for its Bauhaus aesthetic. Turns out “Bauhaus” is German for “building house.” It is also known as an excellent example of the International Style.

The house stands on pillars that remind many of Le Corbusier’s Villa Savoye in Poissy, France. It ought to: Frey studied with him before coming to America. And architects call those pillars “pilotis.”

According to architecture blogger Greg Allen, “Frey compared the house more to a refrigerator than to a building. It was … bolted together with nuts and washers and skinned in corrugated aluminum and ribbon windows.” (Ribbon windows are windows set side by side.)

The fabric used inside the house for the furnishings and walls is no longer made. It was a DuPont product called Fabrikoid, an imitation leather made out of cotton soaked in nitrocellulose. Fabrikoid, DuPont says without irony, was “one of the company’s first non-explosives products.”