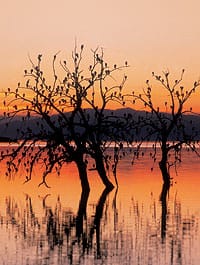 An ill wind blows in from the southeast. Sunbathers leave their patios and head indoors, closing their sliding glass doors behind them against the assault on their nostrils. They shake their heads and mutter disparaging words about the Salton Sea. For many residents of the desert resort communities, the state’s largest lake is something that comes to mind only when the air turns foul. Conversation turns for a while to algae blooms and fish die-offs until the wind changes again and the subject is forgotten. But for others, the sea is worth keeping in mind.

“I wish people would take the time to get out there and explore what I call the real Salton Sea,” says Kurt Leuschner, associate professor of natural resources at College of the Desert and founder of the Desert Cities Bird Club. “It’s a place with beautiful sunsets and fantastic wildlife viewing opportunities. There’s another side to the sea.”

The sea, in fact, drew Leuschner to the area as it draws 400 species of migratory birds. At one time, it also drew more tourists than Yosemite National Park. In recent years, however, the lake has lost much of its attractiveness to outsiders and locals.

The modern history of the Salton Sea began 100 years ago, when the Colorado River burst out of an irrigation canal and created a new lake. By now, it would have evaporated in the desert sun if not for the conversion of much of the Imperial and Coachella valleys to farmland, which supplies the sea with agricultural runoff.

But the waters that have fed the Salton Sea and kept it alive the last 100 years have slowly poisoned it. Unlike most natural lakes, the sea has no outlet. No waterway carries away the salt and other minerals delivered by the New and Alamo rivers and left behind by evaporation. Its salinity has increased steadily and now exceeds that of the Pacific Ocean by 30 percent.

“If nothing else happens, rising salt levels are going to reach the point where fish won’t reproduce,” Leuschner says. “Since many of the birds who use the sea depend on the fish, that would of course be devastating.” But the looming diversion
of water to metropolitan areas, mandated by recent legislation, makes the situation even more urgent.

Several options for saving the sea have been considered, including a pipeline connecting it to the Gulf of California. That’s a solution Leuschner would like to see become a reality, although it may remain a pipe dream.

“There aren’t enough people right now who feel strongly enough about saving the sea who have the political will and the money and all that behind them to accomplish those huge projects,” he says. “For now all they’ve got is a smaller pile of money and a few ideas like creating two separate seas. I guess that’s better than nothing, but I see that as the lesser of two evils, not an ideal solution.”

Dividing the sea in order to save makes ecological and economic sense, according to Ron Enzweiler, executive director of the Salton Sea Authority, a joint powers agency chartered by the state of California and uniting federal, state, county and tribal agencies.

“Years of work by the local community here, led by my predecessor Tom Kirk and the Salton Sea Authority Board and Mary Bono, led to the idea of building a barrier across the sea,” Enzweiler says. “To have a realistic project, you have to think of a smaller but healthier Salton Sea. Our concept is to shrink the lake portion to about 150 square miles in the north end, which would then be a sustainable water body both ecologically and in terms of water quality and shoreline. You would let the south end shrink over time based on the reduction of inflows and manage that as wetlands in a salt sink.” Enzweiler says the ecologic and economic benefits of the project would outweigh the $750 million cost, some of which would be borne by the various agencies involved.

Although the current sea resulted from human intervention, it fills an important niche in the region’s ecology. The site is an ancient seabed that has undergone cycles of flooding and dryness and would have continued to do so if not for the damming of the Colorado River. And with the disappearance of more than 90 percent of California’s wetlands, it has become a vital habitat for several million birds. State law requires steps to mitigate the effects that the looming water transfer will have on wildlife.

The Salton Sea continues to lure recreational boaters, fishers, and campers who contribute to the local economy, although many potential visitors shy away from the area because of odor and fish die-offs. Filtration of the water flowing into the lake could help remedy the situation.

“We can design the lake so it has a natural flushing action just like a native lake would have, and our thinking is a restored sea would have no more of an odor problem than any other lake you’re familiar with,” Enzweiler says. “The same effect that causes the odor problem is what causes the fish to die, in part because of the lack of oxygen in the water. A healthy sea that is designed properly would support a thriving fishery. The Salton Sea has the potential to become a significant resource for the area. It could be the equivalent of Lake Tahoe or Lake Havasu.”

Who will pay what share of the cost remains a subject for negotiation, as the Salton Sea Authority attempts to build  support in other parts of the state and beyond.

“One of the ways we can do that is to design our project so that there’s potential for desalinating some of the drain water
and exporting it,” Enzweiler says. “We’re trying to put together a plan that has multiple potential political supporters. Clearly  the local interest is paramount and the idea that we can do a  balanced project and have it well supported at all these levels.”

These efforts are not without opposition, however.

“Some other Colorado River water users would like to see even more exports of water. So we’re working to convince
people that the merits of our project far outweigh the gains that can be made if you just took the view that the Salton Sea
is a mitigated agricultural drainage dump,” Enzweiler says. “We want to see the water stay in the valley and be put to use for the benefit of the residents of the desert communities.”

Change is in the air. Will the next wind bring the stench of a dying sea or the sweet smell of success?