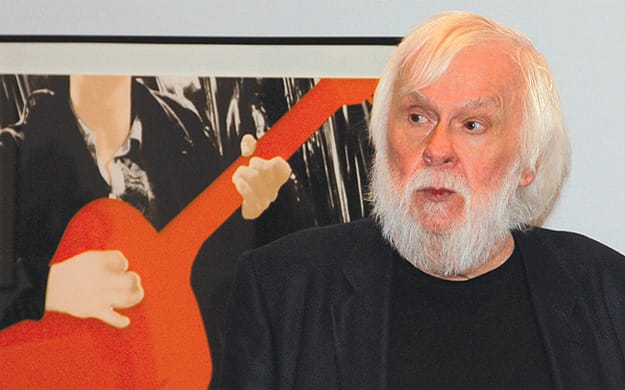 Irony even infuses the title of his retrospective, “Pure Beauty” (organized by Tate Modern and Los Angeles County Museum of Art), on exhibition at The Metropolitan Museum of Art in New York. A cursory glance turns up nothing especially beautiful about the 79-year-old artist’s work — that is, until you realize that each piece seems desperate to speak or utter a sound. Baldessari allows the viewer to fill in the blanks — voids that made him an icon. And 40 years of teaching at CalArts and UCLA made him a legend. He greatly influenced an impressive list of contemporary artists, including James Welling, David Salle, Tony Oursler, Jack Goldstein, and Matt Mullican.

“Teaching is about communication,” Baldessari said in an interview for the PBS series “art:21.” “You have to see the light in the students’ eyes. When you don’t see the light, you try something else. [My] art affected my classroom teaching, trying to be inventive there — to teach students how to look. When you’re looking at two things, look between them. The space between is very important.”

Baldessari started painting abstract landscapes from photographs in post-Depression-era National City, near San Diego, in the 1950s. He had a career-altering experience in 1963: viewing a retrospective of works by French Dadaist Marcel Duchamp at Pasadena Art Museum. By 1967, Baldessari was using photographs not as references for paintings, but for paintings themselves.

In an interview with Tate Modern’s Jessica Morgan, curator of “Pure Beauty,” for Tate Etc. magazine, Baldessari explained he was trying to be “artless” in using found images. “I thought the more I’m involved with art, the more artful I’m becoming, so how do I get myself out of that? Well, have other people do things for me — or just use other people’s imaging.”

Early on, he projected negatives onto a photo emulsion spread on stretched canvas and titled each painting by the location of the image — “Econ-O-Wash 14th and Highland National City Calif.,” for example — and had a commercial painter apply lettering. “I would say, ‘Don’t try to make it decorative,’” he said in the Tate Etc. interview. “I got them to use all the colors that I liked — some are gray, some are kind of icky pale green, pink, or yellow.”

In 1970, Baldessari set fire to all the paintings he made between 1953 and 1966. “I was getting more and more doubtful that only painting was art,” he told Morgan. “The fun of it was doing it, and I thought I really don’t have to own these things; nobody’s ever going to buy them. And I had a slide record of everything.” The audacious “Cremation Project” sent him into uncharted territory: that space between paintings and pictures.

By this time, Pop art — from Andy Warhol’s Campbell’s Soup cans to Ed Ruscha’s photographs of apartment buildings and gas stations — was turning the art world in new directions. Baldessari moved to Los Angeles to teach Post-Studio Art, a new course based on the idea that some artists needed no studio.

His own work continued an exploration into text and photographic images. “What interests me in life is the absurdity in life,” he said in the art:21 session. “Art making is about making a choice. For me, it was you choose one thing over another — this color over that color, this object over that object, and on and on. You have to make a choice.”

One choice Baldessari made was to pursue printmaking, even though he was initially reluctant because of its commercial perception. And although he never fully engaged the technical process, he embraced it and became prolific in the medium. On Feb. 26, 2011, Palm Springs Art Museum opens “John Baldessari: A Print Retrospective From the Collections of Jordan D. Schnitzer and His Family Foundation.” The exhibition continues through June 26.

Schnitzer — “the most significant print collector in this country today,” according to John Buchanan, director of museums at the Fine Arts Museums of San Francisco — began collecting Baldessari graphics in the early 1990s. “I remember the first piece I bought of his: ‘Two Sets (One With Bench),’” he says, referring to a photogravure and color aquatint (opposite page). He has since collected the majority of Baldessari’s prints and multiples, many of which appear in the Palm Springs exhibition.

“I saw his work at museums and was intrigued,” Schnitzer says. “I saw it a few more times and began noticing it in auction catalogs. Then I started bidding on some of his work and buying it. What intrigued me was that I couldn’t stop thinking and wondering what this artist was thinking and trying to convey to me — the odd, cutout photographs with faces blocked out. It was very peculiar.

“John has taken the work of the surrealists to another level,” he continues. “That’s why I think he’s recognized as the most important conceptual artist in the world. He brings me such joy. I love how he teases and toys with me and makes me smile and laugh.

“I like the thrill of reacting to the work without knowing what the critics think. As I collect a lot of the work, it’s exciting to learn about the artist, read critical material, and add more depth of knowledge to my intrinsic reaction.”

The print exhibition debuted in 2009 at the Fine Arts Museums of San Francisco Legion of Honor. After its four-month run in Palm Springs, it moves to San Diego’s Museum of Contemporary Art for an early-2012 opening.

Baldessari’s preoccupation with outlines, silhouettes, and cutouts surfaced in his 1976 “Raw Prints” series.

“I started using stills from movies because I could get the pictures cheaply,” he told art:21. “For me, it’s using this databank of images that people carry around in their head and rearranging those images for them. I bought the pictures from newspapers — celebrities, the mayor, people shaking hands and pointing. They were photo ops. I was attracted but repulsed by them. I was isolated in my studio, and these people were making decisions that probably affect me.

“I was using these price stickers, and I just put them over their faces, and I just said, ‘Wow.’ The phrase I used was that it ‘leveled the playing field.’ All of the sudden, [the people in the photos] had no power over me.”

Baldessari applied the circles to his printmaking, using colors only from the spectrum of the color wheel, typically with meaning (for example, red for danger). He exerts many formalist qualities, but quickly softens that classification: “Not so much structure that it’s inhibiting, but not so loose that it can be anything. It’s a corral around your idea so that it does not move too much.”

“Baldessari once quipped that every artist should have a ‘cheap line,’ in reference to other art forms available in the marketplace,” Karin Breuer, curator at Achenbach Foundation for Graphic Arts, Fine Arts Museums of San Francisco, wrote in the book accompanying the Schnitzer collection. “But his comment belies the serious commitment that he has made to printmaking over four decades.”

Besides, in conceptual art, the idea often trumps the final artwork.

“It’s not like he’s a painter’s painter,” Schnitzer says. “He’s taking all these images and he does things to them. He forces us to deal with this collision of images and languages. We want to understand everything around us. I think it’s our biological nature. We’re threatened and insecure about things we don’t understand. We’re driven to figure out what we don’t understand so we can feel secure.

“We’re so blessed today to be living in the age of information, but it also has driven us into a frenzy,” he continues. “We expect to understand everything all the time. We’re so busy reacting [that] we have no time to contemplate.”

All Images Courtesy The Collections of Jordan D. Schnitzer and his Family Foundation.