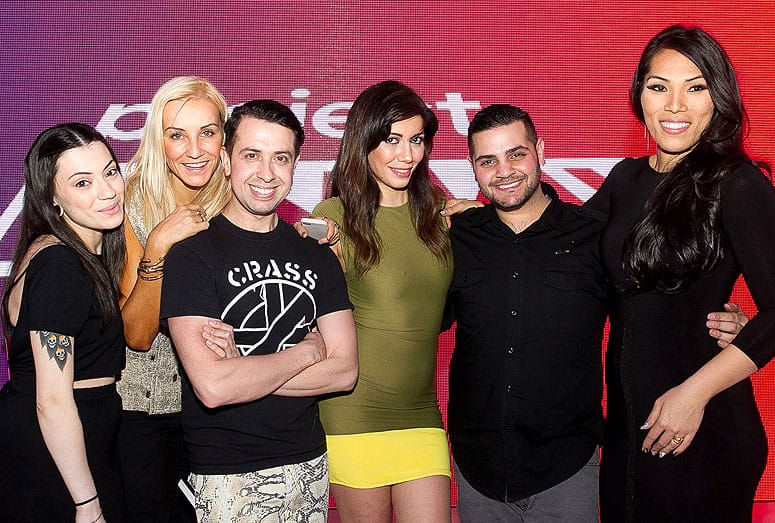 Simmering anticipation for the Superstars of Project Runway came to a bubble on the evening of March 19 as current fashion’s leading “it” man and Coachella Valley darling Michael Costello brought five fellow alumni to share the runway under the Toscana Country Club Runway Tent in Palm Desert.

The buzz at the preceding reception was nothing short of spectacular as the eager audience sampled appetizers courtesy of Trio Restaurant of Palm Springs and readied for a night of glamour.

Costello opened the show with a filmed profile reminiscent of a Project Runway reality show real, introducing one of his two collections, MT Costello, a new collaboration with his cousin and business partner, Stephanie Costello.

Raising the level of beauty and sophistication, the MT Collection dramatically overtook the runway with gorgeous gowns in gothic, empire silhouettes with a hard rock edge. Black lace and velvet patterns united with deeper plums and red colors for a dark romantic perspective.  High collars juxtaposed with plunging necklines evoked an overall fee that was simultaneously feminine, and fierce.

In what seemed to pay homage to mid-modern chic and ladylike style, Helen Castillo put a contemporary spin on refined social attire. Featuring bold canary and cobalt colors as well as pastels in softer yellows and blues, her intricate craftsmanship was evident in the application of lace overlays and sheer paneling woven into constructed tulip forms.

Cheers erupted when Michael Costello returned to the stage to reflect his signature collection, inspired by New York in the winter, with a 1960s Valley of the Dolls vibe, for the finale. Sculptural arrangements with architectural elements were tastefully sharp and infused with Victorian overtures to define the feminine form. Guests rose to a standing ovation as Costello and fellow designers bid good night, and an exhilarated crowd departed raving about the show.

American couture fashion designer Michael Costello was born with talent. The father of two was only 14 years old when he made his first couture collection with Los Angeles’ Lipstick Productions…

Passionate for couture design particularly eveningwear, ready-to-wear, and bridal. Interned for Vivienne Westwood in the summer of 2011 in London, United Kingdom in the Sample Room/Design Studio…

Germany-born Uli Herzner’s love for fashion began when she was a child. She began creating her own clothes at age 11. Best known for her colorful, bohemian resort wear collections…

Viktor Luna’s path from Guadalahara to Los Angeles was just the first leg of the journey for the FIT trained designer who will, once again, be premiering a new collection during…

Designer Irina Shabayeva is quickly becoming a big name in fashion. Born in the Republic of Georgia and raised in Brooklyn, N.Y., Shabayeva graduated from Parsons School of Design…

A finalist on the eighth season of Project Runway, Ari Southiphong — formerly known as Andy South — has been trailblazing her career as a fashion designer and entrepreneur…