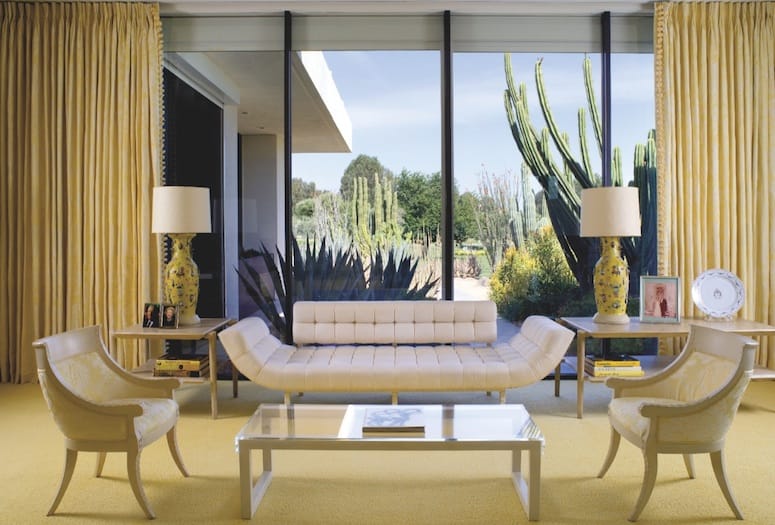 When Ann and Jack Warner finally decided to buy a place in Palm Springs in the early 1960s after years of house-guesting or staying at the Racquet Club, they didn’t opt for a typical midcentury modern house filled with furniture and lighting from the Knoll catalog. Instead, they enlisted their longtime friend and occasional Palm Springs host, Los Angeles designer William (Billy) Haines, to oversee their new spread and infuse their glamorous desert house with classicism and Old World elegance.

Billy Haines was a significant interior design force in Hollywood for decades. The Virginia native rose from a silent film bit player to a megastar with the release of Brown of Harvard in 1926. His film career ended after Haines chose his lover, Jimmie Shields, over a forced “lavender marriage” pushed by the studio. He and Shields went on to bigger stardom in the design world — their firm and their relationship lasted another 50 years, until they died in 1973, within a short time of each other. Photo courtesy of The Annenberg Foundation Trust at Sunnylands

Villa Aujourd’hui. The rare, scenic wallpaper was bought by Haines and Mrs. Ann Warner on one of their many trips to Europe together.

Haines completed many projects for the Warners over three decades, including their 10-acre Beverly Hills estate, bought by David Geffen in 1990 for the astounding price of $47 million. Haines was a consummate diplomat and successfully maneuvered a minefield of “difficult” clients, including Joan Crawford, Carole Lombard, Gloria Swanson, George Cukor, Betsy Bloomingdale, Ronald and Nancy Reagan, Walter Annenberg, and Frank Sinatra — and they all loved him. His clientele expected bespoke decoration, and Haines designed custom furniture and lighting for every project. The Haines look? Sophisticated, spare, and quietly opulent.

In 1958 the Warners found land in Old Las Palmas with two small shabby houses on it. “Mother and Billy assured my father it would be a simple, fast renovation. Nothing major,” their daughter Barbara Warner Howard explained to me recently. “Cheap and cheerful.” Billy Haines, promoted by MGM as a man of style and taste, knew how to act the role in this 1926 publicity shot taken at his Hollywood home.

It was cheerful, but with Billy nothing came cheap. Haines maintained high standards and a certain level of taste that he never delivered with a bargain-basement price tag. Two years later the property was complete — a compound of five buildings and two swimming pools designed in Egyptian Revival style. Maltese falcons flanked the gateway, cleverly referencing the film that was then a jewel in the Warner Bros. crown.

Modernity met antiquity at the Warner estate, fitting for a house built by a studio head during the Hercules/Ben Hur/ Spartacus heyday. The Warners’ Villa Aujourd’hui had understated thin black metal columns supporting deep flat overhanging roofs. The main pool sported classical Roman-style urns equipped with gas flames at each corner, while a bronze Greek maiden poured water into a series of descending fountains. Scattered around the grounds were marble and bronze copies of Greek statues such as a fallen Gaul statue in a pool and a discus thrower at the end of an alley of olive trees. Referencing a classical klismos, the “Conference Chair” was a quintessential William Haines design. This example, one in a suite of eight made for Sunnylands, maintains the chair’s signature inverted-D-shaped cushion and curved back while incorporating splayed legs.

The furniture, however, was classic Haines. His signature low hostess chairs allowed the Hollywood royalty ladies to perch and pivot with their ankles demurely crossed. Long low sofas joined round game tables for entertaining, and any metal on the furniture was sure to be patinated bronze or verdigris. Even the hinges on the toilet seat in the master bath were verdigris. No one ever accused Billy Haines of not having an eye for detail.

Across the desert in Rancho Mirage, Billy Haines was perfecting another grandiose vision, working with Los Angeles architect A. Quincy Jones to create Ambassador Walter and Leonore Annenberg’s Mayan-inspired palace known as Sunnylands. The Annenbergs had even bigger plans for their desert refuge than the Warners. Their retreat would feature a nine- hole golf course, nine acres of gardens, and a mile and a quarter of walking paths under the gaze of 10,000-foot San Jacinto Peak. Like Haines, his well-heeled clients favored big, bold ideas.Sunnylands clocks in at 25,000 square feet. The 6,500-square-foot living area is full of light and air. From their home base in Philadelphia, the Annenbergs brought their extraordinary collection of Impressionist and Postimpressionist paintings, their Chinese ceramics, and their Steuben collection to fill the space.

Sunnylands was well used and much loved by the Annenbergs. Both their art collection and their roster of fancy guests — including royals and heads of state — never stopped growing.

For Sunnylands, Haines created a bright, inviting home in the huge spare spaces that might be unkindly described as retail. He was able to humanize the scale of Sunnylands by arranging small seating groups of comfortable sofas and chairs of his own design. The jewel-like Impressionist paintings in their rococo Louis XV gilt wood frames are beautifully juxtaposed against the lava stone walls.

Billy Haines lamps are design legend. The Annenberg’s collection of subtly colored Tang Dynasty pottery and vivid Chinese cloisonné enamels played nicely with the French art. Wonderful works of art were mounted on tall bases or even low columns and were lit with taut, silk drum lampshades. The lamps are dramatic and elegant, providing beautiful illumination for the artifacts.

It took three years, but when Sunnylands was completed in 1966, Haines and the Annenbergs had created a home of great charm as well as true elegance. Anne Rowe, the director of collections and exhibitions at Sunnylands, explains that the rapport Haines had with the Annenbergs continued long after Sunnylands stood in all its decorated glory. “Haines became a true friend,” she says. “The creative relationship lived on as well. Haines wowed the staid English when he redesigned the American embassy in London, Winfield House, ahead of their residency there from 1969 to 1974.”

Billy Haines and his team brought urbane sophistication to the desert. He understood that when clients escaped to their desert hideaways they didn’t intend to abandon the cosmopolitan quality of life they had spent decades cultivating. Mass-market midcentury modern was economical, practical, and available. Yet Haines’ midcentury modern was none of these things. The contemporary, cutting-edge architecture purchased by his lofty clientele brimmed with custom furnishings, fine French décor, Asian accents, and great art.

Both aesthetics have not only survived, they have thrived.