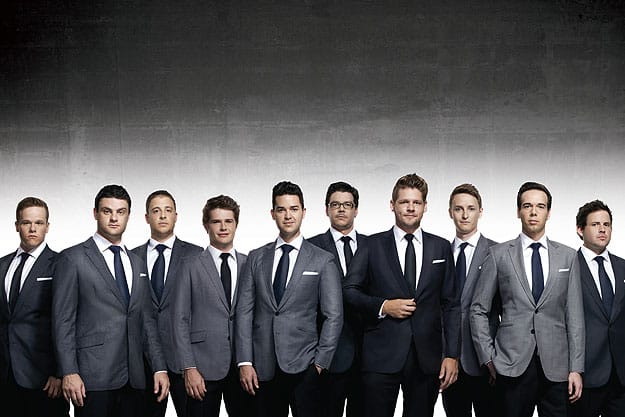 You will know The Ten Tenors by its bold incorporation of contemporary style, rock ‘n’ roll musical influences, and the time-honored traditions of opera. That’s right: The Ten will rock you. Although opera has been gaining a loyal fan base throughout the world with the help of breakout stars like Andrea Boccelli and Luciano Pavarotti, The Ten Tenors emerges as one of the few ensemble acts within the classical genre to achieve long-term, crossover success.  With a total of 10 studio albums peppering its roster, The Ten’s latest, Double Platinum, debuted at #7 in New Zealand. Its previous efforts have earned the group two platinum-selling CDs, four gold CDs, and even the attention of Oprah Winfrey.

How does The Ten Tenors keep its fan base engaged? Credit a combination of changing its young lineup every few years since forming in 1998, reaching out to men and women through touring and social media, and recording well-known hits by some unlikely sources of inspiration. The ensemble has performed covers ranging from Queen’s “Bohemian Rhapsody” to Leonard Cohen’s “Hallelujah.” The result is an unforgettable concert experience, filled with surprises.  See The Ten Tenors perform at the McCallum Theatre, Feb. 22-24, 2013