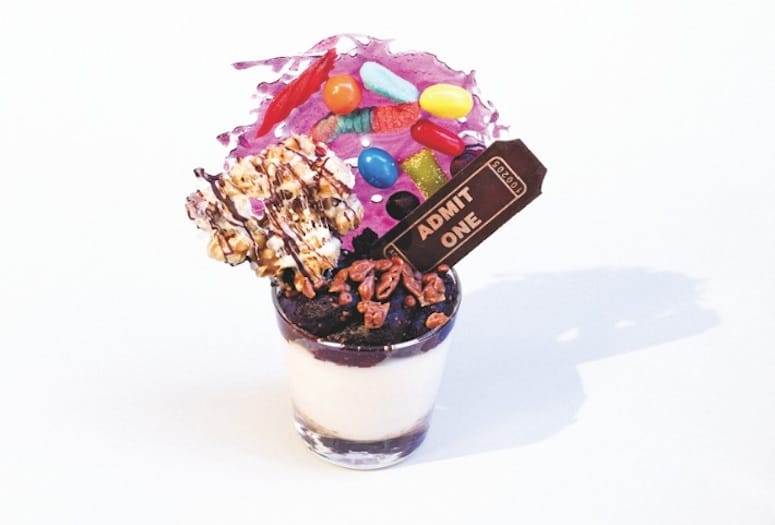 Hostess may be the mostest when it comes to convenience desserts, but even during the humble first year of the Palm Springs International Film Festival (PSIFF) Awards Gala dinner in 1989, Twinkies à la mode were never considered a dessert option.

“Sonny Bono was in charge, and it was a first-class affair from year one,” says Shari Kelley, creative director and owner of Shari Kelley Events, who was there at the debut. “Sonny had a restaurant here. He knew food.”

Sonny also thought big. Mary Bono, former wife of the late mayor, congressman, and PSIFF visionary, recalls that Sonny “went right to the top from the get-go. He thought our festival should rival Cannes. He knew close proximity to Hollywood elite would help, and he relied on some big names — Billy [William] Friedkin, George Hamilton, Jack Valenti, and the Sinatras, among others, including the late Dick Van Patten, who held a fundraiser tennis tournament — to make it all happen.” 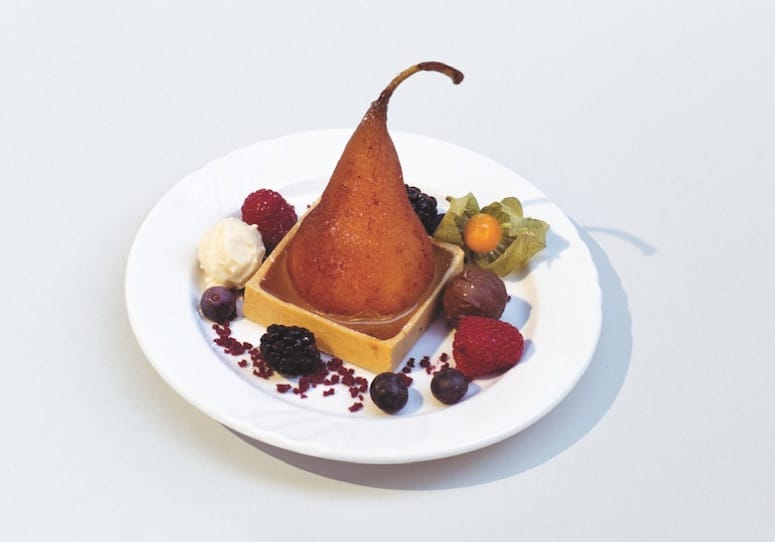 The runner-up … is cinnamon and Grand Marnier poached pear with ginger crème brûlée and fruit.

The former Mrs. Bono confesses to a case of nerves when it came time for that first gala dinner. “I can’t remember what the dessert was, but I know it was well done and presented. Let’s just say I was very thankful for the dinner chairs and the caterer.”

The caterers are the gala’s tastemakers. They determine what’s going to be on your plate each course of the meal. After Sonny’s passing, the torch was handed to Harold Matzner, now festival chairman, and Earl Greenberg. From there, to Jim Houston and his late wife Jackie Lee. Houston now serves as a pre-gala taster in tandem with Matzner and Kelley.

Chef Brad Toles and his wife, Lynne, of Savoury’s Catering hold the catering contract for the Palm Springs Convention Center and have catered the gala for 20 years.
Dessert preparations for the upcoming year begin almost immediately after the previous gala ends. “I’m working all year on dessert,” says Toles. “Research and development, coming up with ideas, testing new flavors and textures, working up recipes.”

Houston’s personal preferences also come into play — he’s a man, says Toles, who tends toward earthy, comforting desserts. Those factors combine with the real point of consideration: functionality and practicality. “At the end of the day, whatever it is has to speak to a very specific audience that’s 2,400 people strong.”

As the holidays near, Toles works to streamline all of the ideas he’s had through the year into three dessert options for the tasters to sample before the big day. While the objective is to select just one dessert, there have been years where the three tasters simply couldn’t agree, so two sweets were served — alternating one to every other plate at the event. 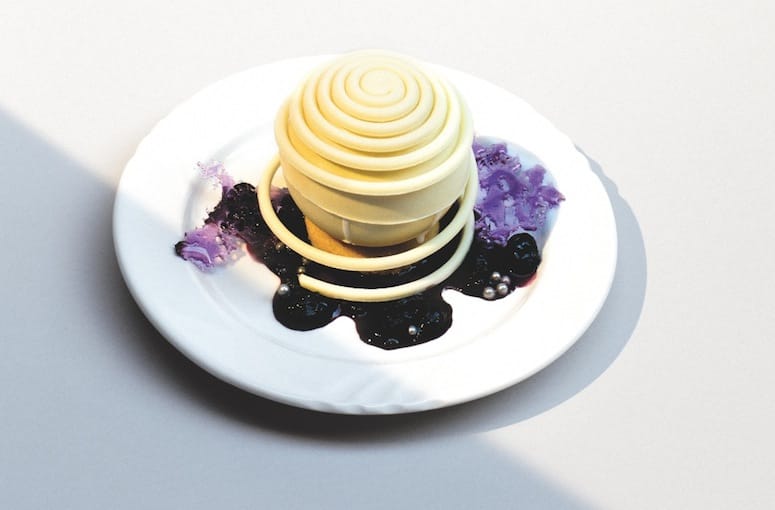 And an honorable mention to … Lemon thyme capsule, lemon cake and curd in a white chocolate sphere.

For this year’s gala, Houston, Matzner, and Kelley assemble on a November afternoon in an anteroom of the Palm Springs Convention Center. Kelley fashioned a table to resemble the actual gala table design, down to the exact number of orchids in the centerpiece.

While Toles perfects plates in the kitchen, Lynne sits with the tasters and a team of servers present his three recommendations for starters: baby hearts of romaine salad with Boursin cheese; baby iceberg and romaine salad; or (the winner) chopped vegetable salad with diced green beans, jicama, celery, chayote squash, grapes, dried cranberries, and feta, with papaya and Israeli couscous and a juniper berry tarragon vinaigrette.

A server clears the table and Lynne runs down the list of entree selections, all of which revolve around short ribs. The artichoke-and sun-dried-tomato-stuffed beef short ribs is a hit, the macadamia nut-crusted beef short ribs are both crunchy and succulent, and the boneless beef short ribs are superb. But Houston, Matzner, and Kelley settle on the sherry demi beef short ribs forestière. The dish is accompanied by dauphinoise potatoes, butternut squash, asparagus, zucchini, and roasted red pepper.

“There’s a large L.A. crowd,” says Lynne, “so we’ll have plenty of vegetarian entrées made to accommodate those with special diets.”

At last, the tasting segues into the dessert round. This year’s meal-ending candidates include “At the Movies,” vanilla bean panna cotta over a crushed sugar cookie, topped with crunchy Milk Duds chocolate mousse, caramel corn, and movie candies; “Cinnamon and Grand Marnier Poached Pear,” filled with ginger crème brûlèe and served atop a caramel dulce de leche–filled shortbread tart; and “Lemon Thyme Capsule,” a lemon and thyme cake with lemon curd and lime icing encased in a white chocolate sphere, served over blueberry coulis.

As the tasters look at each of the desserts’ visuals and then sample, Toles thinks back on past favorites.

There were the early years — 1999’s “Hollywood Trio,” a lemon tart, chocolate ganache, and génoise with Godiva chocolate, and almond nougatine with fresh berries and crème anglaise. There was the finely attenuated “Tiramisu Mousse” in 2005 that packed a decidedly filmmaker punch — a martini glass filled with tiramisu mousse, topped with powdered chocolate and fresh berries, and garnished with a white chocolate comedy mask and filmstrip.

Toles also recalls a personal favorite — the “Lemon Flambé” of 2013, a shortbread cookie topped with lemon cream and a golden meringue, served with a sugar-dusted Linzer cookie.

“In 2014 he [Houston] was leaning toward apple pie,” says Toles, who took that preference and amped it up. “We wound up with a modern take on apple pie, an apple caramel tart in a pool of vanilla bean sauce garnished with raspberries.”

The three tasters don’t take long to tell the catering couple that they found a winner: “At the Movies.” The Milk Duds mousse crowned with candy, caramel corn, and an “ADMIT ONE” chocolate ticket particularly appealed to Houston. “I always think the dessert should be something people will look at and enjoy — and even want to take home,” he says. “But above all, it must taste good.” And it does.

Houston usually stops by two to three days before the event to check on progress, but it’s more of a formality. Like Mary Bono, he, Matzner, and Kelley are more than happy to trust the prepwork to Toles and his team. As Houston says, “Leave it to the professionals. They know how to do it and how to get it done.”

“At the Movies” Dessert by Numbers