The Thrill of the Grill - With a little practice, you too can be a backyard-cooking master 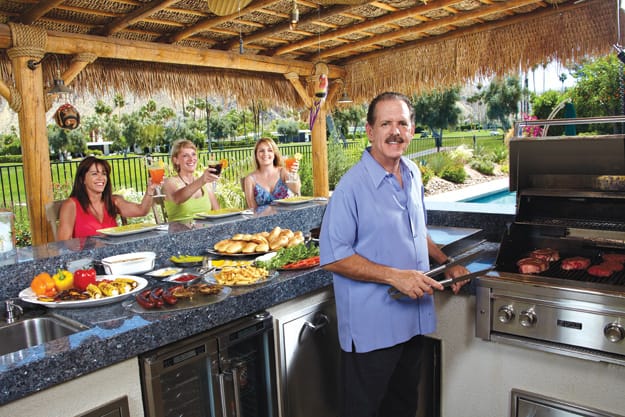 “Want to know the secret to grilling really great hot dogs?” Scott Aaronson asks. “You boil them for 10 minutes on the kitchen stovetop before placing them on the grill for the finishing marks. Boiling keeps in the moisture.”

Aaronson, one of the most respected plastic surgeons in the Coachella Valley, has become known among his peers for grilling prowess.

“I love the entire grilling experience. Experimenting with different woods, seasonings, and rubs helps me get creative and further my knowledge of what works and what doesn’t,” he says. “For me, enjoying great-tasting food straight from the grill in the comfortable surroundings of my home is a great way to unwind and connect with family and friends.”

For Aaronson, grilling is more than a favorite American pastime.

“To the majority of Americans, barbecue and grilling are terms often used interchangeably,” he says. “Barbecue, in its purest form, is the slow smoking of food over a low flame or heat source for an extended period of time. I have an electric smoker in which I smoke the meat for hours before it’s done. Grilling, on the other hand, is cooking the food over a high heat source — such as a live flame, flat top, or sealed grill — for a much shorter period or time.”

A fan of the Cooking Channel and Food Network, Aaronson notices that the experts on television often use the touch-and-appearance technique for determining when the food is done.

He relies instead on a battery-operated, Thermapen digital thermometer with foldaway probe.

“It gives me a reading on the food’s readiness in a few seconds,” he says. “It costs about $90, and it’s a grilling enthusiast’s best investment,” he says of the tool used in commercial kitchens.

“Grilling can be quite a daunting proposition if you’ve never done it before,” Aaronson continues. “However, it’s definitely not a mystery or rocket science. It’s about learning the basic techniques that work. There’s trial, error, and experimenting. More importantly, it’s about having a good time.”

THE HEAT IS ON
Grilling is classified by two main cate-gories: direct heat and indirect heat. For chicken, steaks, hamburgers, fish fillets, or any piece of meat, poultry, or fish that is small enough to cook inside before the outside burns, grilling directly over the heat source is recommended. Indirect heat, where food is placed on burners that are not over direct heat or a flame works best with roasts, pork shoulders, turkeys, and ribs.

“Remember to preheat your grill with all the burners turned on and set to high with the lid closed,” Aaronson recom-mends. “When you cook, you’ll want to season the grill with vegetable oil or olive oil to prevent the meat from sticking. In most cases, you will grill with a closed lid.

“As you experiment, you’ll become acquainted with what works for you. There’s a host of great books and websites you can turn to for information,” Aaronson says. “For me, hamburgers are done medium when the Thermapen reads 140 to 145 degrees. If it reads 100 degrees, the meat is raw.

For chicken, white meat is done perfectly at 165 degrees, and dark meat is done at 175 degrees. London broil is absolute perfection at 135 to 145 degrees.”

BRING OUT THE FLAVOR
“Always make sure your meat is at room temperature before you place it on the grill,” Aaronson says. “And if you want a reading of 130 degrees, pull the meat off at 120 degrees. It will continue to cook for a bit after you take it off the grill. Just as you play with the seasonings and flavors, play with the temperatures.”

Other tips for grilling success include manipulating the food as little as pos-sible. In other words, avoid smashing down hamburgers and pushing out the juices that make the meat moist and flavorful.

“To control the flame, keep a spray bottle filled with water next to the grill,” Aaronson advises.

“One of my favorite marinades is Kikkoman teriyaki sauce,” Aaronson says. “Season the meat with the teriyaki sauce and set it aside for at least 10 minutes (or overnight in a plastic bag). Just before you’re ready to grill, sprinkle the meat lightly with garlic powder or chopped fresh garlic, onion powder, and freshly ground black pepper.”

Other great seasonings for grilling include chili powder, cayenne, paprika, and mustard, all of which can be incorporated into a “mop” to be brushed or drizzled onto the meat.

“It’s best to apply any sauces with sugars, including those that are ketchup-based, to the meat just prior to taking it off the grill. Otherwise, the sugar content in the sauce will burn the meat on the outside before it cooks inside,” Aaronson says.

Brines and rubs add flavor and moisture to grilled meat and fish. Brines are soaks of salts, herbs, and spices and are best when used for dry cuts of meat like turkey, chicken breasts, and pork chops. Rubs come in two varieties: wet or dry. Dry rubs are made with herbs and spices and are either literally rubbed on the food or sprinkled over it. A wet rub contains a liquid ingredient (usually oil), which is coated over the surface of the food.

“Grilling with hickory wood chips adds amazing flavor to the food,” Aaronson says. “There’s also apple, cherry, and a variety of other woods. If there isn’t a compartment for wood chips on your grill, then that great smoky taste can be obtained by using a smoking tray or wrapping wood chips in aluminum foil. To release the flavor, simply poke a few holes in the foil, and place the package on the preheating grill. Make sure the chips start to smoke prior to placing the food on the grill.”

Knowing your grill and some basic tips; selecting tools of the trade; choosing the right cut of meat, poultry, or fish; and developing your sense of what works in seasonings and temperature bring forth grilling mojo.

“You don’t have to be perfect right off the bat,” Aaronson says. “Investigate, read, and experiment. Grilling should be a joyful, playful, and creative experience.”

One hour prior to grilling, take the steaks out of the refrigerator. Set steaks aside on a plate. It’s important to grill
the meat when it is at room temperature.

Preheat grill about 20 minutes until the temperature stabilizes at 450 degrees.

When the steaks reach room temperature, spoon Kikkoman teriyaki sauce generously on both sides of the meat. Set aside steaks on a plate for 10 minutes.

Sprinkle garlic powder, onion powder, and pepper on both sides of the steaks.

When the grill temperature reads 450 degrees, spray the grate with cooking spray or brush with oil and place steaks on the grill.

After approximately 5 minutes, use a meat thermometer to determine how fast or slow you’re grilling the meat.

Always keep an eye on the grill. If a flare-up occurs, move the steaks to a different part of the grill and spray the fire with water.

The steaks will take approximately 10-15 minutes to cook. Turn them once after about 7.5 minutes. For medium-well steaks (slightly pink inside), the meat thermometer should read 145 degrees. Remove steak from the grill and let it sit about 5 minutes before serving.