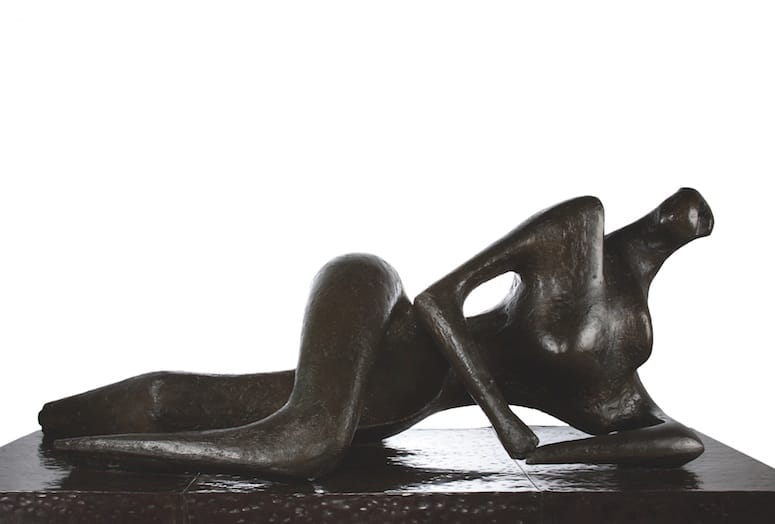 A Passionate Eye: The Weiner Family Collection, which opens Oct. 3 and runs through Jan. 31, 2016, has a expansive number of amazing pieces to view.

But make sure you see these 10.

Jean Arp, Growth (1938, pictured at right)
One of the artist’s best-known works was shown for the first time at the Museum Drive current location in the 2007 exhibition, Picasso to Moore: Modern Sculpture From the Weiner Collection.

Alexander Calder, The Lizard (1968)
Gwendolyn Weiner picked this playful, painted steel stabile as her favorite among the artist’s works exhibited at Fondation Maeght in Saint-Paul de Vence in the south of France.

Roger de La Fresnaye, Landscape With Woman, Cow, and Dog (Marie Ressort avec ses Vaches, La Bergère) (circa 1913)
Gwendolyn began traveling with her father when she was 8 years old. On a visit to Knoedler Gallery, art dealer Harry Brooks led them up a staircase and the cubist painting was hanging to their left. She recalls her father leaning over her shoulder and saying, “I’m going to buy this.”

Jacques Lipchitz, Draped Woman (1919)
This is an excellent example of work the artist did while he explored Pablo Picasso’s groundbreaking principles of cubism. He constructed the cloaked figure in the classic geometric fashion. He created many nudes in the cubist style.

Amedeo Modigliani, Head (1911-13)
While visiting Knoedler Gallery in New York, Weiner allowed his daughter to choose between the Modigliani and a horse head by Georges Braque. Gwendolyn was later reunited with the Braque through a Dallas collector.

Henry Moore, Reclining Figure (1956)
Weiner collected some artists in depth — especially Moore, who is represented in the exhibition with nine sculptures, including two classic reclining figures. Reclining Figure captures the artist at his best.

Pablo Picasso, Angry Owl (1951)
Father and daughter spotted the Angry Owl on a visit to Curt Valentin Gallery in New York. Ted saw the piece up high, looking down on them. The piece, Nash says, “seems most likely to represent for [the artist] a petulant domesticated” bird, noting that Picasso had a pet owl.

Henry Moore, Stringed Figure (Bowl) (1939)
This surrealist work was in storage for more than 20 years before museum then-Executive Director Steven Nash had it restored for a 2007 exhibition.

Eugenio Pellini, Judas (1906)
Nash found this piece, inspired by Auguste Rodin’s Eve, in poor condition after years outside with improper care. “It needed a lot of work on its patina, a thorough cleaning, and rewaxing,” he says. “It looks fantastic now.” Gunther Uecker, Light Disc (1961)
This work, constructed of nails on canvas on white-painted wood, was briefly installed at the Palm Springs Art Museum in Palm Desert. “This was not an easy piece [for conservators] to clean,” Nash says. “A few hundred nails pounded into wood with little spaces between them required tiny sponges and toothbrushes.”