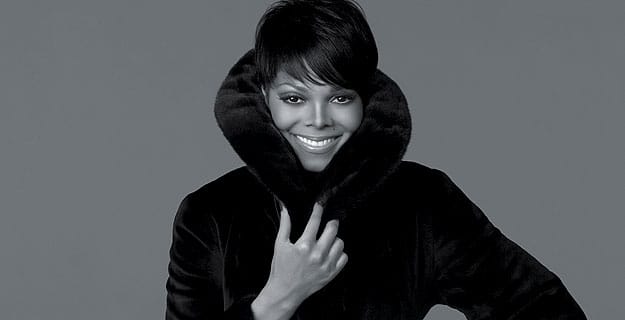 Your ring tone may be Janet Jackson’s “Nasty Girls,” “What Have You Done For Me Lately,” or “Rhythm Nation.” But hers is a standard one that came with her phone.

It seems surprising for a pop megastar whose entire life has been steeped in music. The youngest sibling of the famed Jackson Five brothers, however, is something of an enigma. Her singing, dancing, and glam photos exude confidence, power, and control. Yet in her book, True You (Karen Hunter Publishing/Gallery Books, 2011), she reveals that she has suffered from insecurity about her body and that she began her musical career only reluctantly. Clearly, the Jackson persona belies the person inside.

Millions of people are seeing a new, intimate side of the soft-spoken but hard-driving singer on her Number Ones: Up Close and Personal tour. Typically, you’d find her performing in an arena seating 10 times or more the capacity of 1,127-seat McCallum Theatre. Yet the Palm Desert venue secured Jackson for its 2011 anniversary gala.

“It all started from a private show I did in New York at Radio City Music Hall,” she says. “I had never done anything like that. Being able to see each and every face, the energy I felt being close to people — I really enjoyed it.

For Jackson, fans and friends are often synonymous. “A lot of friends [in Europe] … would ask, ‘When are you going on tour?’ They hadn’t seen me in 12 years, so I knew I wanted to do something different than what I had done before, not knowing what that would be. Then I did that private show and realized this is the way I want to present the next project, which is the Number Ones package.

“It’s more than what I thought it would be. I truly think — I know — this is the most fun I have had on any tour. It’s really been fulfilling.” Some venues, she notes, have lacked air conditioning. “It feels like we’re in a sauna. But we’re still enjoying ourselves,” she says. “I get the opportunity to really be close to the fans. … I can see each and every face. … The energy is even greater; it’s much more intensive — in a good way.”

Jackson’s Dec. 1 McCallum appearance will be her first concert in the Coachella Valley, but not her first performance in the desert. She recalls being here when she made the music video for “You Want This” (from the 1993 album janet). In the song, Jackson’s girlfriends tell her that a boy is watching and wanting her.

The pop star has only been in Palm Springs once since then: “I was there a few years ago,” she says. “I drove down with a friend. We had lunch and drove back to L.A. … I was surprised how much [the desert] was developed.”

For more than three decades, I’ve struggled with yo-yo dieting. Some of my battles with weight have been very public. But most of them have been internal. Even at my thinnest, when my body was being praised, I wasn’t happy with what I saw in the mirror or how I felt about myself. (Excerpt from True You, reprinted with permission)

“I think everybody has insecurities, and it’s something I continue to work on,” Jackson says. “The public has a certain perception. We all, especially artists, are incredibly insecure. People put us on a pedestal. They think everything we do is so glamorous. We are just like everybody else. There’s another side to the story.”

Jackson divulges her own insecurities in True You, just as her fans have confided to her private details of their lives. Skeptics would suggest a star of Jackson’s caliber wouldn’t care. But she does, and she thinks would-be strangers — these fans she considers friends — disclose things to her about their lives because they trust her music. “They see the truth and what I feel,” she says. “The songs, the albums, are my diaries; and I think the way I open up in the work is very vulnerable. … I think they feel it’s safe for them to open up to me.”

As a result of my success on Good Times, I was beginning to develop a small amount of self-esteem. I had accomplished something on my own, apart from my family. I had proven that I could act. The problem, though, is that the self-esteem was overwhelmed by self-doubt. I still did not see myself as attractive or especially talented. I figured I had gotten a lucky break. (Excerpt fromTrue You, reprinted with permission)

Though she had performed with her brothers at the MGM Grand and on The Jacksons TV show, Janet’s career in entertainment began in earnest with her role (at the age of 10) as Penny on the sitcom Good Times. Four years later, her father, without her knowledge, secured a contract for her with A&M Records. When MTV and VH-1 reigned as the go-to sources for pop culture, her combined talents in singing, dancing, and acting made her music videos mainstays on award shows.

Her future, she says in her book, includes more records, films, dancing, television, and books.

“I will definitely do more acting,” she says.” I’m going back in the studio and recording more music. I was going back this year; but, with the tour, we have been so busy and it’s been going so well I haven’t had the time to do that.”

The tour began last February and ends in February 2012. Meanwhile, Jackson has been reading scripts since signing a deal with Lion’s Gate to produce a film: a project she says has been a dream of hers. She’s considering a variety of genres — from romance to drama to science fiction. “It has to hook me from the gates,” she says. “I would love to do something interesting and thought-provoking. I love realism, real stories.”

As for another book, she hasn’t decided exactly what it will be, but it would be similar to True You (subtitled A Journey to Finding and Loving Yourself) in one regard: “It’s just about helping people,” she says, “because I have been really blessed, and it’s just trying to give something back in the way I know I can.” Jackson recognizes that her career in music has opened the door to that opportunity. The book even includes health-conscious recipes from local chef Andre Carthen that helped her lose weight. “I have a few ideas [for the next book],” she says. “I would love to do something for children as well.”

Jackson’s keen interest in children led her to add a 20 Under 20 component to her Number Ones tour, recognizing up to 20 young people for contributions to their communities in each of the cities on her tour by giving them two tickets to her show and an opportunity to meet her backstage.

“It’s really been great going to different countries and cities, seeing kids from different walks of life, different backgrounds,” she says. “It’s just been really amazing to see what these kids have done. … They’ve started their own companies, started small financial community groups … some as young as 6 years old making jewelry and sending the money to orphanages in Honduras.”

Also at each of the stops on the tour, Jackson dedicates a song from the top 35 hits she’s performing at each show. For Palm Desert, she selected “Love Will Never Do (Without You).”

“For one very brief moment, I was going to dedicate ‘You Want This,’” because we shot the video there. But I thought, ‘I don’t know if they would really enjoy that.’” Her choice of “Love Will Never Do” is “for the boys that are out there,” she says. “I know from fan mail it’s one of the videos [gay men] really love.”

Jackson’s albums have, thematically and in their titles, followed where she’s been in her life mentally. While she says she won’t know what her next music will be until the tour ends, “It will probably be something that’s uplifting, celebratory.”

Meanwhile, she wakes up every morning mindful of her life philosophy. “The first thing I do is pray. It’s really about trying to be true to myself and living every day that I possibly can to its fullest, because you never know what tomorrow brings — and to live with no regret.”