"The View UpStairs" Hits All the Right Notes in Ambitious Musical

Now playing at the Desert Rose Playhouse in Rancho Mirage, The View UpStairs is a musical based on actual events that took place in 1973 at the UpStairs Lounge, a gay bar in the French Quarter of New Orleans. The second floor location, which had bars on the windows and evidently no emergency exit, was the scene of a vicious arson attack that trapped and killed 32 people — the largest massacre of gay people until the 2016 Pulse shooting in Orlando.

While a mass killing seems an odd topic for a musical, the show manages to be both funny and moving with intriguing, well-thought-out characters and some pretty relatable situations. (There’s even a gimmick regarding time travel that provides its share of laughs, including some jabs at our current president.) As a musical, there are plenty of lively songs that keep the action upbeat while providing backstory on the characters or furthering the plot. Robbie Wayne’s choreography is inventive and fun, especially in the group numbers.

At times the show is a delightful camp fest. At other times, it grows dark, taking the audience back to a time when gay clubs were frequently raided by angry, anti-gay police, being in drag could get you arrested, and there was a lot of self-loathing among the out and proud. It’s a fun show with its share of heavy moments, and it was beautifully executed all around.

The ensemble cast is very strong, and the camaraderie among the group is palpable. As Freddy, a Latino drag queen, Anthony Nannini hits all the right notes (including some unfathomably high ones). When he comes out as Aurora Whorealis, his alter ego, he commands the stage. His mother, Inez, is movingly played by Siobhan Velarde. Her anthem about her acceptance of her son (“The Most Important Thing”) was beautifully performed and is a highlight of the score.

Van Angelo is terrific as Wes, an outsider who falls for one of the patrons. His character has a legitimate arc in the show, which Angelo pulls off masterfully, peeling back the layers as he takes Wes from a cocky, full-of-himself hipster to a real person with real emotions. 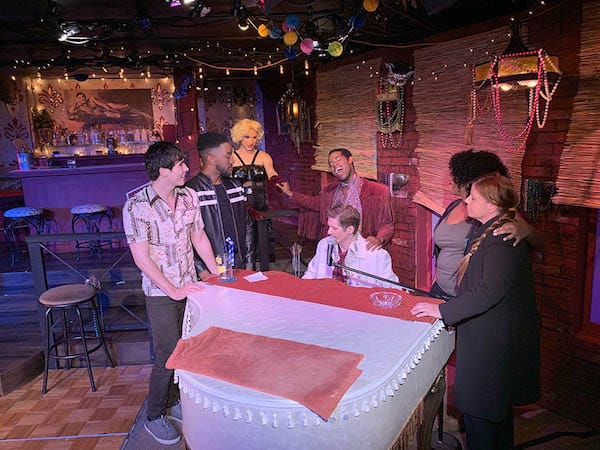 The behind-the-scenes crew is top notch. Bruce Weber’s set design is exquisite; the club looks appropriately run-down and is filled to the hilt with tacky decorations. Director Robbie Wayne’s insightful staging keeps the action going at all times, while the costumes (by Wayne and Ruth Braun, who is wonderful as priestess Rita Mae) are beautifully over the top, effortlessly taking you back to the early 1970s.

The only issue was the sound. Wayne mentioned in his curtain speech that they were working with a new system, and it seemed there were a few bugs that still needed to be worked out. In solo numbers it was often difficult to hear the performers, especially if they were upstage or not facing you directly. Beyond that, this is a flawless production with great performances all around that takes us back to an important event in LGBT history. Highly recommended.

The View UpStairs plays at the Desert Rose Playhouse through March 31. For more information or tickets, call 760-202-3000 or visit desertroseplayhouse.org.