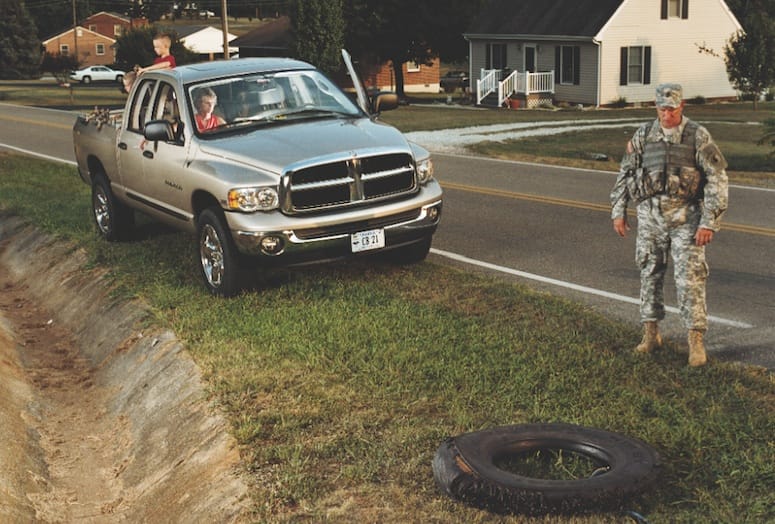 Staff Sergeant Kyle Winjum, U.S. Marine Corps explosive ordnance disposal technician, stands on a swath of raw desert in Twentynine Palms, outfitted in the gear he wore while serving in Iraq, and re-creates the IED explosion that seared his mind — and the moment in a San Diego bar that triggered the memory.

His metal detector hovers over the sand while his eyes stare up in another direction. Behind him, a comrade kneels to closely examine the area near a plume of smoke rising from a detonated IED. To his left, four casually dressed men drink and socialize at a makeshift palapa bar while a woman with a camera snaps a photo, causing a flash that pierces the scene.

On this crystal-clear spring day in the High Desert, Winjum became the subject of a photograph, a work of art so rich and poignant in narrative and choreography that the photographer, Jennifer Karady, pairs it — and all of her other 4-foot-square color prints in this series — with text to give viewers a fuller understanding of the action.

Jennifer Karady: In County, Soldiers’ Stories From Iraq and Afghanistan — an exhibition opening Dec. 13 and continuing through March 29, 2015, at the Palm Springs Art Museum — serves up striking photos that restage service members’ most pivotal, often traumatic moments from the war. The artist interviews her subjects at great length, allowing these intensely unsettling and emotional memories to surface organically.

“We’re building an image slowly over time,” she says. “The photo shoot is the final culmination of the process.” In one photograph, former Army Sgt. John Holman ascends a stairwell at Palo Alto University holding his books as if he were aiming a rifle. In another, former Army Ranger Staff Sgt. Andrew Davis sits by the water with fellow soldiers washing blood off their clothes and joking to cope after one of his mortar gun leaders was hit by enemy fire that caused his eye to pop out of his head. And in another, former Marine Corps Sgt. Jeff Gramlich barricades himself inside a suburban Buffalo, N.Y., house fortified with sandbags and appears to look out the window as if on alert.

Karady fuses the memories, the visions, and the adaptive behaviors into her photographs, often set in suburban neighborhoods and common locations, including schools.
For the Palm Springs Art Museum, Karady’s exhibition fulfills a goal for Deputy Director of Art and Senior Curator Daniell Cornell. “I was looking for a long time for an exhibition to address the U.S. wars in the Middle East,” he says. “I didn’t want it to come down on one side or the other, but to open a space for dialog.”

Karady has no family in the military, and she’s too young to be affected by Vietnam. But her parents were raised in Eastern Europe during World War II, so Karady grew up hearing war stories. “When we invaded Iraq, it felt momentous,” she says.

Another catalyst for this series of photographs was the news in 2004 about soldiers returning home with post-traumatic stress disorder. “It really struck me,” she says. “I spent about a year researching PTSD and talked to veterans about staging the moment that affected them most. They responded positively.” Karady produced the first picture in 2006, and her process has evolved over time.

“Every experience is slightly different,” Karady says. “The process is really collaborative. I go home and listen to all of those hours of interviews. I take copious notes. And the next time we meet, I might have questions or want to go deeper. Sometimes in the process of talking, people will put things together themselves. They’ll reveal a connection, an adaptive behavior. That’s really satisfying.”

When Karady came to the High Desert, on a commission from Palm Springs Art Museum, she specifically sought to photograph an explosive ordnance disposal specialist. She interviewed five veterans in the area, including three active-duty Marines from the base in Twentynine Palms. “I do a pre-interview on the phone,” she says. “They read the stories and see the pictures, and some [of the soldiers] know what they want to tell me. A key ingredient is the person’s enthusiasm [for the project]. If they have a reservation, that’s a deal-breaker.

“I chose Kyle because of his clarity and understanding of this moment and how it came home with him,” she continues. “The photograph is about a particular [improvised explosive device] explosion. There were four IEDs planted in the area, and they were walking around on foot with metal detectors looking for the bombs. They found two and detonated them. Then another one was remotely detonated close to his team leader. Time slowed down, and he said he could see things in the explosion he could never see before. It was a visceral experience. The team leader was OK, but the explosion stuck with him. “A year later, he was back in San Diego with friends in a bar. People were taking pictures on a dance floor. The flash triggered his memory of that explosion, and he walked around the bar to make sure everyone was safe. I’m interested that photography did that.”

To produce the photograph, she set out to provide a safe, comfortable place for Winjum to create a positive experience. “It’s really intense,” Karady says. “I always ask, ‘What is going to make you feel safe?’” she says. “The most common response is a spouse or family. They have a lot of control over the process.”

For Winjum, she set up strobe light in the corner of her studio at the Joshua Tree artist residency and exhibition space BoxoProjects. Here, she tested the flash with him on several occasions. “I asked if he was up for it, and he was,” she says. “He knew it was coming, and it was fine.”

When casting characters in the photograph, Karady tries to use people who her subjects know. The men at the palapa bar in the Winjum image are also EOD Marines. “It’s a commitment for [her subjects] and their families,” Karady says. “It becomes a way to share the story with family and others, who are really grateful that they open up. They get to know their son, or friend, a little better.”

For the artist, hearing her subjects’ stories can be the most difficult part of the process. “The interviews can get really emotional, and it affects me,” she says. “There are sleepless nights. But, in the end, everybody feels good about it.”

Once she and her subjects define the action in the scene they’ll photograph, she says, “I sketch it out and talk about the relationship between the people and the narrative. I show them the props. We rehearse it privately, with no crew, and I shoot Polaroids so they can see what it looks like and what works best. “I have to tell a story in one frame instead of a time-based medium like film,” she says.

Karady’s process is also rich with good intention. “I wanted to make this picture in a way that can be helpful to a person,” she says.

This approach distinguishes her from other photographers, and that’s what appealed to Cornell when he pursued the exhibition for Palm Springs. “The generous degree in which she opens up her creative process to the soliders” is extraordinary, he says. “Oftentimes [with other artists], what we get is the artist’s voice, and the subjects are either excluded or spoken for — and so [Karady’s process] became a way of investigating a very long art-historical issue in photography: the relationship between the subject and the object as it is captured by the camera.”