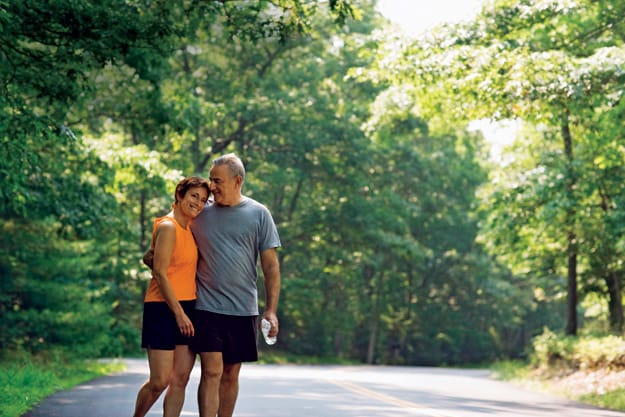 Unlike computers, our brains possess an unlimited capacity of memory. However, the machines often do a better job of storing and/or recalling information entrusted to them than our gray matter does. Fortunately, we can use computers to maintain data so our neural network doesn’t have to spend its time remembering our third cousin’s phone number or any other detail we don’t need on a regular basis.

Despite the fact that computers are now portable (and, indeed, ubiquitous), we like to think we can think for ourselves most of the time. As we age, however, our ability to dig into the vast treasure chest of knowledge we’ve accumulated seems to become more difficult.

If you consider lapses in memory disconcerting, you won’t like what G. John Andersen has to say. According to the professor in the department of psychology at University of California, Riverside, cognitive ability begins to decline when we reach the ripe old age of 25.

“The area of the brain associated with problem solving and reasoning is the prefontral cortex,” he explains. “If you look at the data on brain-imaging scans, you see declines in the size of that area: 1 to 2 percent every five years starting at 25.”

Change Your Way of Thinking
In his late 80s, Raymond Cattell was forced to abandon his love of sailing due to navigational challenges (despite his lifelong experience on the water) — an ironic circumstance, as it was the renowned psychologist (1905-1998) who developed the concepts of “fluid” and “crystallized” intelligence.

“Generally, if you set aside clinical disorder, crystal intelligence stays intact, and it’s the fluid intelligence measures that typically decline,” says Anderson, who is studying visual perception and task switching in his lab. “The rate of decline varies. There doesn’t seem to be any one factor responsible for that. Some factors that affect the rate of decline are genes, exercise, and diet.” The measurements he refers to include decision-making speed.

“The two areas where we see the largest changes, independent of diseases, are the prefrontal cortex and the hippocampus, which is associated with memory,” he says.

But Anderson offers more than a crumb of optimism.

“There’s lots of good news on this end — lots of good news,” he says. “The best evidence for interventions to improve brain function is that regular, moderate exercise demonstrated improved cognitive ability for individuals over age 65. When they did brain scans, they found the pre-frontal cortex increases in size. Whether it’s an increase in neurons or connections is not clear.” Particulars aside, the increase is noteworthy: a 12 to 14 percent increase resulting from six months of regular exercise.

In light of four recent studies, Senior Helpers, a company that provides the services of professional caregivers to seniors in their homes through 300 franchises (including one in the Coachella Valley), urged seniors to stay active (i.e., gardening, walking, and partaking of seasonal activities). The studies — reported in Harvard Women’s Health Watch, Archives of Internal Medicine, and Archives of Neurology — revealed the following:

Women who exercise regularly (categorized as walking briskly five to six hours per week) at age 60 were almost twice as likely to live beyond 70 with no cognitive, physical, or mental-health limitations.

Men and women 55-plus who exercised at least three times per week were half as likely to develop dementia later in life compared to those who did not exercise regularly.

Women, age 70 and up, with mild cognitive impairments who engaged in aerobic exercise four times per week showed significant improvements over a control group in all administered cognitive and physiological tests over a six-month trial.

Get Tough
Funded by the National Institute on Aging, Anderson’s lab is developing tests and training procedures to improve visual function.

“The interventions in my lab challenge people to improve their abilities in visual perception,” the professor says.

By now everyone’s heard about the supposed benefits of “brain games,” and more than a handful of companies are capitalizing on our collective fear of losing our minds, so to speak.

“Reading or writing or puzzles engage the brain at some level,” Anderson says. “The question is whether that is enough by itself or does it need to be challenging. You need to present people with tasks that are challenging.” In other words, while reading is certainly better for your brain than watching television, reading Proust or Tolstoy is probably better for your brain than reading a Harlequin romance or People magazine.

And while crossword puzzles and sudoku can be challenging, Anderson says the benefit of solving them (brain-function wise) depends on how much it actually engages the brain in a non-automatized activity.

“If I am a concert pianist and I retire, it’s not difficult to play a concerto,” he says by way of offering an example, “but if I played piano for six months as a teen and at 68 pick it up again, it would be very challenging.”

There’s also good news in that our ability to maintain focus is “malleable,” Anderson says. Thus, individuals can improve their spatial attention — and that leads to another skill set: performing multiple tasks within a given amount of time.

“Multitasking is a bit of a misnomer,” Anderson says. “They probably are switching very quickly [from one task to another]. The data on one’s ability to switch seems to suggest that, overall, older people might be slower at re-sponding.” In other words, the ability itself does not disappear; switching may just require more focus.

If your brain is functioning properly as you read this, then it can recognize the take-home message as little more than common sense: Eat a healthy diet, exercise, and challenge yourself mentally.

The Mouse Connection
In 2010, researchers at the Center for Brain Science at Harvard determined that caloric restriction, as well as exercise, countered the debilitating effects of aging by maintaining and rejuvenating connections between nerves and the muscles they control.

As people age, nerves can shrink, causing the intersection of nerves and muscles to break from a continuous network into clumps, which can result in the eventual death of muscle fibers. The Harvard professors of molecular and cellular biology divided elderly mice into two groups: the first had been on a restricted-calorie diet their whole lives; the second was put on a one-month exercise regimen.

The diet group largely avoided age-related deterioration of neuromuscular junctions; the exercise group reversed some of the deterioration, but not all. Given the limitations of the experiment, the researchers cautioned against drawing conclusions. But the evidence at least suggests that both diet and exercise play a role in synaptic well-being.