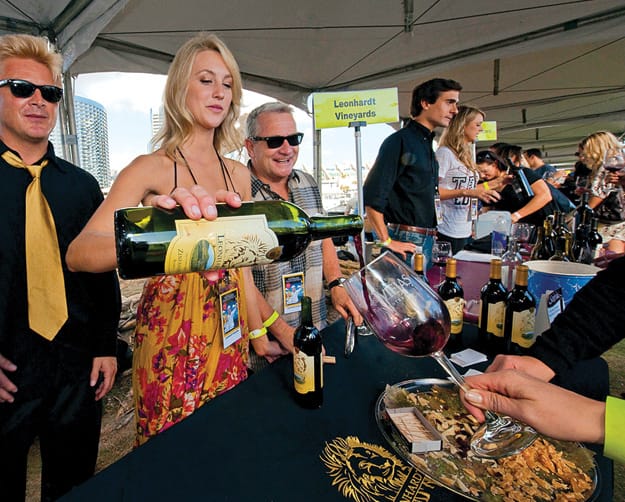 With little effort, you could taste a thousand wines over the next 365 days. Trust me. I’ve done the math.

In May, the Paso Robles Wine Festival grand tasting alone featured more than 400 wines, though I’m not suggesting you taste that many wines in one marathon session.

The point is that festivals offer an efficient, centralized way to learn about different wineries and their wines in a convivial atmosphere. California blesses its residents with multiple opportunities to discover wines they might not find in their local stores or without extensive traveling. Better still, festivals often include live entertainment (i.e., music and chef demonstrations), winemaker dinners, auctions, new release and reserve tasting receptions, and auxiliary celebrations. You can find festivals most of the year, which makes it easy to pace a thousand-wine mission.

If you missed President Reagan’s second inaugural luncheon, you could have tasted the Schramsberg crémant demi-sec the White House served by attending the inaugural Fashion Food & Wine grand tasting in Palm Desert. Hugh Davies, head of Schramsberg, poured four sparkling wines at the March event, explaining that the crémant blends chardonnay, gewürztraminer, and flora (a sémillon-gewürztraminer cross that Davies said is only grown in the United States by his winery).

On the heels of that event, the Coachella Wine Festival in April focused on boutique wines and included a winemaker dinner with Olympic skater-turned-winemaker Peggy Fleming Jenkins and her husband, Greg Jenkins (Fleming Jenkins Vineyards & Winery).

Farther afield but still within driving distance from the desert, Paso Robles showcases its wineries with a couple of annual fests. In March, zinfandel fans indulge their passion at the very popular Zinfandel Festival, featuring zins, zin blends, and zin-friendly foods. In May, the field grows to include the whole alphabet of varietals in the simply named Paso Robles Wine Festival.

In April, the four-day Pebble Beach Food & Wine event takes advantage of its famed golf links, kicking off with a celebrity chef and winemaker golf tournament. Multiple educational tastings, luncheons, and dinners (mostly at The Inn at Spanish Bay) precede the grand tasting in a 60,000-square-foot tent on the lush Monterey Peninsula.

California’s longest-running wine festival, the Monterey Wine Festival takes place in Monterey. This year’s event (June 10-12) marks the 33rd iteration — and the venue is unlike any other, with a grand tasting in the Monterey Bay Aquarium. Check out the oyster bar and more than 400 wines.

As of this year, the California Wine Festival takes place twice: beachside in Dana Point at the end of April (2010 marked the first Orange County outing) and beachside in Santa Barbara in July (15-17). This year’s Santa Barbara fest adds a Spanish-flavored celebration with tapas, Santa Barbara County wines and Spanish imports, Spanish music, and flamenco dancing (July 15) as a precursor to the grand tasting on the 17th.

Sonoma Wine Country Weekend  (Sept. 3-5) boasts two highlights: a grand tasting and a wine auction, during which winemakers entice you to bid with song, dance, and comedy. At the grand tasting on MacMurray Ranch, you can sign up for a free wine seminar, have a sommelier lead you through a 30-minute guided tasting tour through the grand tasting tents, watch the Steel Chef Competition, or wander through the tents designated for Sonoma’s 12 appellations.

The San Diego Bay Wine & Food Festival reserve and grand tastings have sold out the last couple of years, so purchase tickets well in advance of the Nov. 17-21 event. Another beachside fest (behind Seaport Village), this one includes a Wine Rave (featuring 25 of the “edgiest” wines on the market), cooking and wine-tasting classes, and a celebrity chef luncheon with a big-bottle auction.

These are by no means the only festivals out there, but they should be enough to convince you that you could taste a thousand wines and live to tell about it.