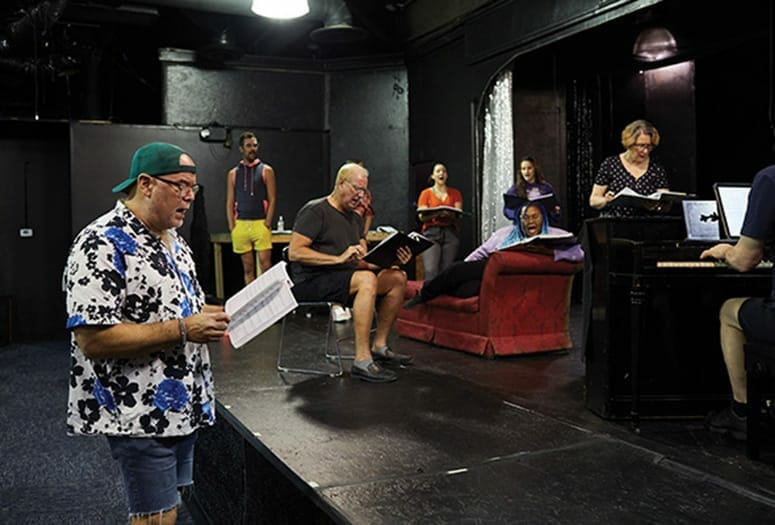 2–4, 9–11/Do Not Remove Label
In 1966, 12-year-old Tommy and his newly widowed mother, Tammy, are making latkes to celebrate Hanukkah. A missing label on the sofa triggers an FBI visit, turning the holiday upside down. Can the neighbor, Cookie Balinsky, save the day with rugelach and good cheer? desertensembletheatre.org

2–18/Palm Springs Getaway
This nostalgic romp with familiar and original songs features glimpses of the history, celebrities, and icons who made Palm Springs famous. The show transports audiences from the early desert landscape to the vibrant, inclusive community we know today. palmcanyontheatre.net

6–18/Fun Home
Adapted from Alison Bechdel’s 2006 graphic memoir of the same name, this musical follows Alison as she uncovers secrets through three different ages in her life. cvrep.org

9–23/Irving Berlin’s White Christmas
In this stage adaptation of the 1954 film, veterans Bob Wallace and Phil Davis, who have a song-and-dance act after World War II, follow a duo of singing sisters to their Christmas show at a Vermont lodge. With a score featuring well-known standards — including “Blue Skies,” “How Deep Is the Ocean,” and the title song — White Christmas bursts with yuletide cheer. dtworks.org 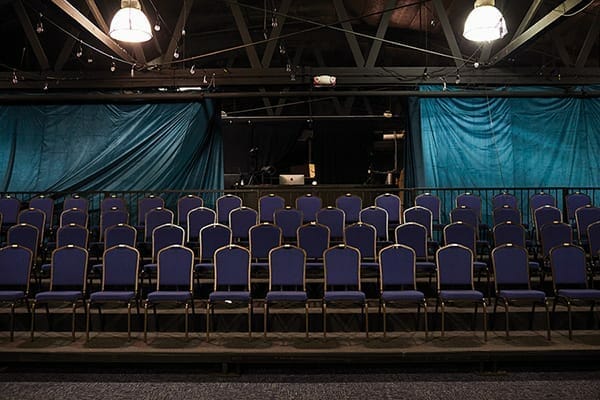 13–22/A Bright New Boise
Will flees from his northern Idaho hometown after tragedy strikes his Evangelical church. Working at a Boise Hobby Lobby, he seeks to rekindle a relationship with his estranged teenage son and connect with new coworkers. As Will gets to know the goofy group of employees, the truth about his past and true motivation for returning to Boise is revealed. dezartperforms.org

13–Feb. 5/Nunsense
The Little Sisters of Hoboken are … men! When five members of the convent learn that 52 of their sisters have been accidentally poisoned by food prepared by their cook, they’re tasked with raising money to pay for the burials. They decide to perform a musical-comedy variety show to secure the funds. dtworks.org

17–29/Dirty Blonde
This hit comedy tells a story that is as unlikely, outrageous, and fascinating as Mae West herself. The iconic actress connects two lonely fans, ultimately leading to a fresh, funny, and sometimes bizarre romance. cvrep.org

27–29/Kill the Editor
Ben is hired to edit a documentary for the Cannes Film Festival. With only one week and a filmmaker who doesn’t want to touch a frame, can he cut a five-hour version down to size? When the previous editor demands her position back, what will Ben do? desertensembletheatre.org

10–March 5/The Mousetrap
In Agatha Christie’s thrilling mystery, news spreads of a murder in London, and seven strangers find themselves snowed in at a countryside guesthouse with a killer in their midst. Which one is the murderer? Who will be the next victim? Can you solve the mystery before another “mouse” succumbs to the trap? dtworks.org

10 –March 5/The Scarlet Pimpernel
This swashbuckling action/adventure musical is based on Baroness Orczy’s 20th-century novel. The wealthy, snobbish Sir Percy Blakeney leads a double life, keeping from his newlywed that behind the mask, he is the master of disguise — an escape artist rescuing aristocrats before they are sent to the guillotine in an effort to preserve liberty, equality, and fraternity during the French Revolution. palmcanyontheatre.net

17–19/South Pacific
During World War II, an American nurse stationed in the South Pacific falls in love with a middle-age expatriate French plantation owner but struggles to accept his mixed-race children. A secondary romance, between a Marine lieutenant and a young Tonkinese woman, explores his fears of the social consequences should he marry his Asian sweetheart. The Rodgers & Hammerstein classic includes well-known songs such as “Some Enchanted Evening,” “Nothing Like a Dame,” and “Younger Than Springtime.” desert-theatricals.com

21–March 5/Once
Once tells the story of Guy, an Irish songwriter who spends his days fixing vacuums in the Dublin shop he runs with his father. While on the verge of giving it up altogether, along comes a girl who convinces Guy to believe in love, music, and the courage to carry on. cvrep.org

24/Cozy Murder
When a guest turns up dead, the others must ask, “Was it murder? If so, whodunit, how, and why?” script2stage2screen.com 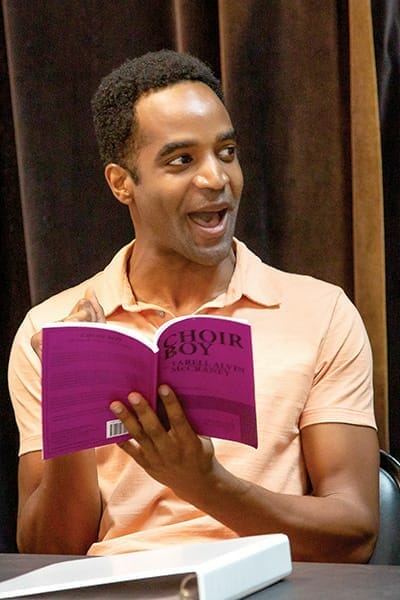 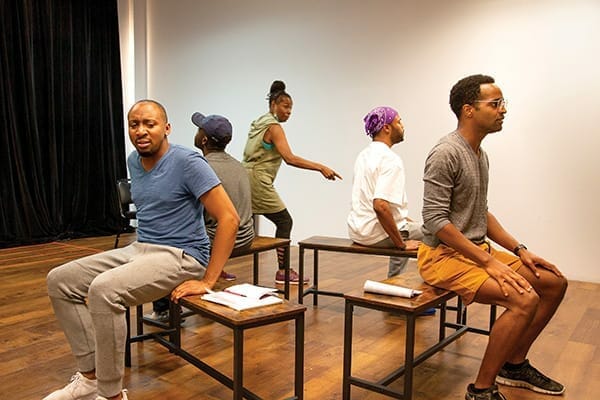 1 –5/The Scarlet Pimpernel
1–5/Once
1–5/The Mousetrap
See listings under February.

3–12/A Funny Thing Happened on the Way to the Gynecologic Oncology Unit at Memorial Sloan Kettering Cancer Center
A foul-mouthed twentysomething comedian and a middle-aged man embroiled in a nasty divorce come together when their cancer-stricken mothers become roommates in the hospital. Together, they negotiate some of life’s biggest challenges...while making some of the world’s most inappropriate jokes. dezartperforms.org

10–12, 17–19/Kafka’s Joke
On his deathbed, Franz Kafka instructs his friend, Max Brod, to burn his unpublished manuscripts. Brod, believing Kafka is a literary genius, does not destroy the work, leading to Kafka’s writings rising to literary prominence decades later. Brod escapes from Nazi Europe with Kafka’s works, ultimately dying in 1968 and leaving the manuscripts to his secretary in a confusing will. Who owns Kafka? This true story is based on a 2016 Israeli Supreme Court case. desertensembletheatre.org

10–April 2/Escape to Margaritaville
This energetic show features Jimmy Buffett classics such as “Volcano,” “Fins,” “Cheeseburger in Paradise,” and, of course, “Margaritaville.” dtworks.org

17–19/Beauty & The Beast
The classic story tells of Belle, a young woman in a provincial town, and the Beast, who is really a young prince trapped under the spell of an enchantress. If the Beast can learn to love and be loved, the curse will end, and he will transform into his former self. But time is running out. If the Beast does not learn his lesson soon, he and his household will be doomed for eternity. desert-theatricals.com

17–26/Daddy’s Dyin’ Who’s Got the Will?
Set in a small Texas town, Daddy’s Dyin’… concerns the reunion of a family gathered to await the imminent death of their patriarch, who has suffered a disabling stroke. This hilarious and touching story about the rebirth of a family unit’s spirit is told in the traditional Del Shores’ fast-paced fashion that keeps audiences holding their guts and drying their eyes. palmcanyontheatre.net

24/Prepping for Widowhood
Four women in the winter months of life are determined to make the most of their friendship. script2stage2screen.com

28–April 9/Hand to God
Tormented by feelings of lust and loss, an unhappy teenage boy tries to please his mother by performing with a puppet for her church ministry. However, things don’t go quite as planned. Tackling the nature of good and evil, Hand to God is a metaphor for getting to the crux of matters. This dark comedy contains sexualized scenes, violence, profanity, and puppet nudity. cvrep.org

1–2/Escape to Margaritaville
1–9/Hand to God
See listings under March.

7-23/Little Women: The Musical
Based on Louisa May Alcott’s life, Little Women follows the adventures of sisters Jo, Meg, Beth, and Amy March. Jo is trying to sell her stories for publication, but no one is interested. Following a friend’s advice, she begins to write more about personal experience, weaving the story of herself and her sisters growing up in Civil War America into a musical journey. palmcanyontheatre.net

14–16/Joseph and the Amazing Technicolor Dreamcoat
Andrew Lloyd Weber’s re-imagining of the biblical story is told entirely through song. After his brothers sell him into slavery, Joseph ingratiates himself with Egyptian noble Potiphar but ends up in jail after refusing the advances of Potiphar’s wife. While imprisoned, he discovers his ability to interpret dreams and soon finds himself in front of the mighty but troubled, Elvis-inspired Pharaoh. Joseph’s solution to Egypt’s famine elevates him to Pharaoh’s right-hand man and reunites him with his family. desert-theatricals.com

14–16, 21–23/Future Thinking
Middle-aged super fan Peter finds himself held by Comic Con security after violating a restraining order by his favorite actress from a sci-fi TV series. Meanwhile, the spoiled starlet, Chiara, is stuck in a hotel suite with her stage mom and bodyguard. Will Peter ever be able to deliver Chiara an important and mysterious message? desertensembletheatre.org

14–23/The Garbologists
A white conservative New York City sanitation worker and a Black Ivy-educated single mother are thrown together in the cab of a garbage truck, working for the Department of Sanitation. They bicker, one-up each other, and practice the secret art of mongo: hunting for treasure in the trash. They discover some things are easier to toss than others. Honoring our essential workers, this hopeful story is about finding common ground in uncommon times. dezartperforms.org

14–30/The Play That Goes Wrong
It’s opening night of the Cornley University Drama Society’s production, The Murder at Haversham Manor, where things quickly go from bad to disastrous. This 1920s whodunit has everything you never wanted in a show: an unconscious leading lady, a corpse that can’t play dead, and actors who trip over everything (including their lines). Nevertheless, they make it through to their final curtain call, with hilarious consequences. dtworks.org

21/After Another
This show presents a glimpse of the foibles of various sorts of intimacy in the modern world. script2stage2screen.com

5–14/She Loves Me
In this love story that inspired the hit romantic comedy movie You’ve Got Mail, Amalia and Georg, shop clerks in a 1930s European perfumery, seldom see eye to eye. They each respond to a “lonely hearts” ad in the newspaper and now live for the love letters they exchange. When they discover the identity of their true loves, the twists and turns begin. palmcanyontheatre.net

12–21/The Last Five Years
Told through inventive, funny, and powerful songs, The Last Five Years is a two-character musical that navigates the ins and outs and the ups and downs of a marriage. This is the beautiful story of a couple’s five-year relationship. dtworks.org

19/Altruism
A family tragedy could cost her the remainder of her life. This is a story of quiet heroism and struggle. script2stage2screen.com