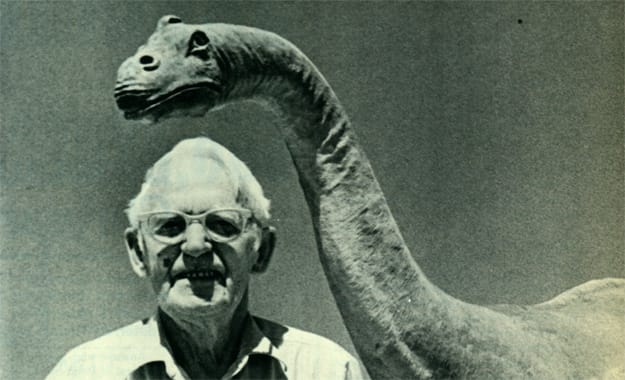 (Republished from the September 1975 issue of Palm Springs Life magazine)

Anyone who passes by Cabazon, a little town a few miles northwest of Palm Springs on Interstate 10, can’t possibly miss the life-size model of a dinosaur that towers above the desert floor.

The 150-foot-long and 45-foot-tall steel-and-concrete brontosaurus. 11 years in the making, has been unavoidably noticeable to thousands of motorists traveling the freeway between Los Angeles and Palm Springs over the past decade.

First, there was the steel mesh skeleton. It stood along the freeway for some eight years, begging the question, “What is it?” until the long, swooping neck and head were added, giving the outline definite form.

In 1972 the dinosaur finally got its skin as workmen sprayed gunite, a fine, sandy cement, over the wire mesh shell of the statue.

The finishing touches took a couple more years, though, and meantime the lifelike dinosaur remained little more than a gigantic oddity for passing motorists to gawk at. Of course, they could get out of their cars and walk up to the beast, and their kids could climb up on its huge feet. Still, they probably couldn’t help but wonder what it was all about.

All that should change now, however. “Dinney the Dinosaur,” as it is affectionately called by its creator-builder, Claude K. Bell, is open for business.

This summer workmen completed those finishing touches, including the modern conveniences of electricity, plumbing, even air conditioning.

Now, when motorists get off the freeway, they can enter the dinosaur by way of a door near the tail, climb a flight of stairs and find themselves in the middle of Dinney’s belly.

There they will discover a gift shop and small museum complete with gift souvenirs plus glass cases of rifles and handguns dating to the 18th century and an assortment of artifacts from various cultures.

On the walls they will see mural-like paintings of various dinosaurs and bust sculptures of prehistoric man: Neanderthal, Peking, Cro-Magnon.

And behind the first counter there usually will be a spry and somewhat unassuming septuagenarian named Claude Bell ready to answer all questions.

He will tell them that, yes, he is the one responsible for the brontosaurus, that it was an 11-year labor of love and that he is not through yet.

He will point to the painting of a Tyrannosaurus Rex on the wall to his right and reveal that building a life-size replica of it will be his next project.

“That’s what it will look like,” he tells visitors as he looks at the painting of the beast that stands formidably upright and grins through terrifying, dagger-like teeth. “It’s the pretty one up there. See how beautiful she is.”

And after Rex, there will be more: some smaller models of dinosaurs for children to play on and an amusement park with rides. An entire “Dinosaur Gardens” in fact.

For some 25 years Bell has envisioned “Dinosaur Gardens” as a major tourist magnet, luring travelers off the freeway to enjoy his prehistoric creations and to patronize the adjoining Wheel Inn cafe and gas station. (Bell opened the cafe in 1958; currently, he leases the restaurant to a business tenant.)

But the dinosaur represents more than just another tourist attraction. It is also the realization of Claude Bell’s lifelong dream to build by himself some huge, lasting monument to if nothing else — himself.

“I wanted to do something tor myself,” he said flatly. “I wanted something here to have people come out to visit me.” It’s finished now, and he has his wish.

Claude Bell is a small, slightly-built man. He wears silver-colored glasses, a modest sport shirt, and casual pants. He’s 78 now, but you’d hardly know it by watching him get about.

Bell divides his week between Cabazon and Buena Park, where he operates the portrait studio at Knott’s Berry Farm. He has had the concession there for more than 20 years and still supervises the stable of 15 artists.

Two events that had a profound influence on his life took place when Claude Bell was 10 years old and growing up in his native Atlantic City, New Jersey.

First, he embarked on his lifelong artistic career. “It was an accident of sorts.” Bell said, apparently somewhat amused at what had to be at least the 1,000th retelling of the story.

One day the young Bell was modeling objects in the sand near the boardwalk when some appreciative passers by started to throw-coins on the coat he had left nearby.

“So the next day I brought a sheet, and from then on I knew I was in business,” he recalled. And he was. It was a business that would lead him to travel throughout the country, sculpting sand and concrete figures at various fairs and expositions. It also eventually would lead him to California and Knott’s Berry Farm.

“In 1937 I got my first look at California when I opened at the San Francisco World’s Fair and I said, ‘This is for me.’” When the fair closed in L939, he moved from Atlantic City to Long Beach and set up his business there.

Several years passed and then Walter Knott approached Bell and asked him to sculpt lifelike figures for his big amusement park.

“As soon as I got in there I told him. ‘I’m not coming in here just to do your figures; I want a concession.’” Bell said, recalling his early business astuteness. “I realized he had a certain class of people coming through which would be good for my type of thing.”

“So, Walter gave the concession — the first one at the park — and he even let me go out and pick the spot myself. The place I picked was right next to what turned out to be the main gate.”

It was not the only time that Bell displayed a knack for being able to pick a good business location.

The second event with far-reaching influence that occurred when Bell was 10 was seeing a wooden and tin house near Atlantic City built in the shape of an elephant.

“Goddoneit, I couldn’t stop looking at it,” Bell said as he wiped his glasses and then brushed back his white hair. “I knew that it had tremendous drawing power — anything so big and massive. That stood with me.”

Today, he credits seeing the elephant all those years ago as having inspired him to build the dinosaur.

But, in addition to the childhood vision, Bell derived incentive for the dinosaur from the desert and from the windy, desolate area around Cabazon.

“What could be more natural here? You know, bones of dinosaurs have been found here in the (San Gorgonio) Pass. They used to play out here,” Bell said, pointing toward the bare and jagged San Bernardino Mountain foothills to the north.

“What could be more in place than making a dinosaur here? Everybody else is going Western. They’re not playing up the early ages. They’re only going back to the ‘49ers. All the interest now is way before that,” Bell mused, thumbing through a copy of “Early Man,” a Time-Life series book that he keeps on the front counter of his shop. “People are asking ‘Where did we come from?’”

Bell bought his 62 acres in and near Cabazon more than a quarter of a century ago. He had come to the desert to build a home for his first wife, who had arthritis. But she died before he could get her settled in here.

Later he remarried and had a new family — four daughters who are now grown up. He is a great-grandfather from offspring of his first marriage.

Bell’s second wife, Ann Marie, shook her head slowly as she recalled the early 1950s in Cabazon: “You should have seen this place then. I couldn’t figure out why Claude was so enthused. There was nothing here but a gas station.”

Claude quickly interjected: “At that time all I wanted was a little recreation and to get away from the rat race. I traveled up and down the hills and roamed about. Anyways, it was peaceful. And besides, I knew it would be a good place for business one day.”

Bell explained that in those days no one was sure what was going to be the exact route of the new freeway which would replace old U.S. Highway 70-99 as the main highway.

“So, we had to wait to know the route to make our plans,” Bell said. “I figured if you’re near an off-ramp, you’re a lucky guy.”

Touché! Bell owned the property next to the westbound off-ramp at one of the two freeway exits in Cabazon.

Mrs. Bell, however, said luck wasn’t solely responsible. “He’s pretty farsighted about everything,” she acknowledged. “I don’t know how he does it.”

In 1964, after he completed drawings and plans. Bell broke ground for his brontosaurus. He engineered the building himself, “with the help of some freeway engineers” who also were generous with surplus road building supplies.

Bell used the surplus materials to build the steel framework and the concrete foundation of the dinosaur. He salvaged the structure’s fire escape from a burned-out building in Banning and, in general, made use of whatever type of material he could find lying around.

Even with the remarkable amount of scavenging. Bell still estimates the building of the dinosaur has cost him $200,000, “and that’s without the stuff I found for nothing."

The price tag is one reason the brontosaurus took so long to complete. Bell said. That and the unpredictable weather in Cabazon.

“Sometimes the wind would be blowing so hard you couldn’t work.” he said. “Other times it was too cold to work. And another time, you would simply run out of money.”

But the little old man is still the eternal optimist. He has written off the hardships of building the first dinosaur as useful experience that will allow him to build more dinosaurs, better and quicker.

He already has steel beams salvaged from a defunct Banning drive-in movie theater, stacked and waiting to be fashioned into the tyrannosaur.

“I have 11 years of experience and I know what I’m doing now. I’ve accumulated a lot of know-how about making dinosaurs.”

And to hear him tell it, there’s plenty of time left to realize that dream of a garden of dinosaurs. “Heck, I’m only 78 and I figure I have a good 30 years left.”

Mrs. Bell agrees, and even expects a little more: “I’m wondering what he’ll come up with next,” she said, with a wink.